When the Bryant Hornets and the Cabot North Panthers freshmen teams went to the fourth quarter on[more] Thursday night at the Bryant Middle School gym, the Hornets were clinging to a 23-21 game. And they were still leading by the same score when the 1:00 mark was reached. 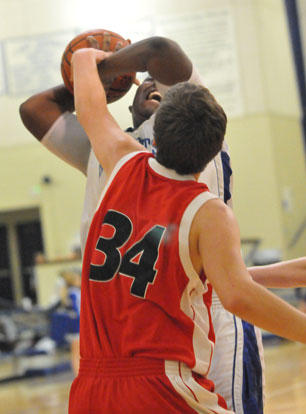 At that point, Cabot North’s Peyton Glisson was fouled and went to the line with a chance to tie the game. He missed most shots off the front of the rim but the long rebound came back to him despite Bryant’s effort to block him out.

Glisson missed a follow shot but teammate Garrett Rowe swooped in to collect another offensive rebound. He was fouled and went to the line with :41.8 to go, again with a chance to tie the game.

Rowe made the first shot to make it 23-22 but missed the second. But, once more, the rebound went to Cabot North as Rowe chased down the loose ball. With :24.6 left, Sebastian Zulch was fouled by the Hornets.

In a one-and-one situation, Zulch made both shots to tie then give Cabot North the lead, its first since the 3:36 mark of the second quarter.

Bryant head coach Mike Simmons called a timeout with :22 left and the Hornets did a good job of executing their offense upon returning to the floor. They got the ball inside to Cameron Murray and the big guy was fouled going to the hole at the :10.8 mark.

But neither of Murray’s free throws would fall. Cabot North’s Jared Dixon rebounded and was fouled immediately. After the march to the other end, Dixon missed the front end of the one-and-one and the Hornets had another chance to pull out the win as Simmons called another timeout with :09.1 left. 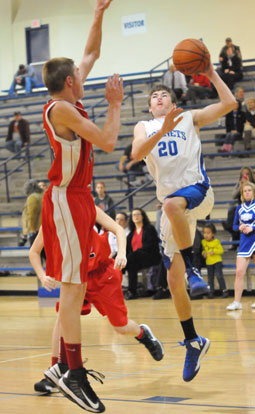 Cabot North had two fouls to give before the Hornet got into the bonus and the Panthers used them to make Bryant take up time getting the ball up the floor.

After the sixth foul, Simmons took his final timeout with :06.1 left, planning out an attempt at a game-winning play. With the ball in the hands of playmaker Kris Croom, the Hornets started their offense at the top of the key. Croom was double-teamed, however, and couldn’t find any room to work. He wound up taking a desperation 3 at the buzzer and it came up well short as Cabot North celebrated an 24-23 win.

It was a frustrating finish for Bryant, which wound up being held scoreless in the fourth quarter.

The game was the Central Arkansas Junior High Conference opener for the Hornets. Cabot North had opened on Monday with a 44-40 loss to Conway Blue.

Bryant will try to get its first league win on Monday at Benton.

Croom and Murray finished with 9 points each for the Hornets. No one else had more than 2 as Bryant shot 8 of 32 from the field and just 6 of 13 at the free-throw line. 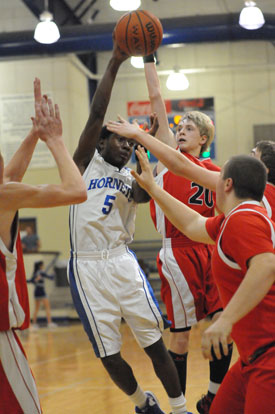 Up against a packed in 2-3 defense, the Hornets were patient early and made some plays inside. Trailing 3-2, Murray and Clay Ingold worked the high-low post for a basket for Ingold, giving Bryant its first lead with 3:04 left in the first quarter. Glisson scored for Cabot North inside then Croom dished the Murray for a deuce that made it 6-5.

A 3 by Rowe and a stickback by Dixon, however, gave Cabot North a 10-6 lead going into the second quarter. That would be the Panthers’ biggest lead.

The Hornets regained the lead with 2:51 left in the half. Croom had hit a 3 and Dixon scored inside. Two free throws by Croom made it a 1-point game then Murray blocked a shot. Croom fed Jaelynn Jones who netted a jump hook that had the Hornets up 13-12.

A free throw by Murray and, later, his layup off a dish from Trey Harris produced the Hornets’ largest lead of 16-12. Dixon banked in a jumper to make it a 2-point game at the half.

The game was tied at 19 midway through the third quarter. A floating jumper by Croom snapped the deadlock with 2:33 left in the period. Ingold fed Murray for a basket and it was back to 23-19. Again, however, Dixon managed the last basket of the quarter.

In the fourth quarter, both teams forced turnovers or missed shots until, with 2:30 left, the Hornets spread the floor. Out of a timeout with 1:57 to go, they ran a play that Cabot North foiled. Harris did a good job of retaining possession of the ball in a scramble in the lane.

Croom got a shot away but missed only to have the ball go out of bounds off the Panthers. Given a third chance, the Hornets worked an inbounds play but turned the ball over with 1:21 left, setting up the final decisive scenario.