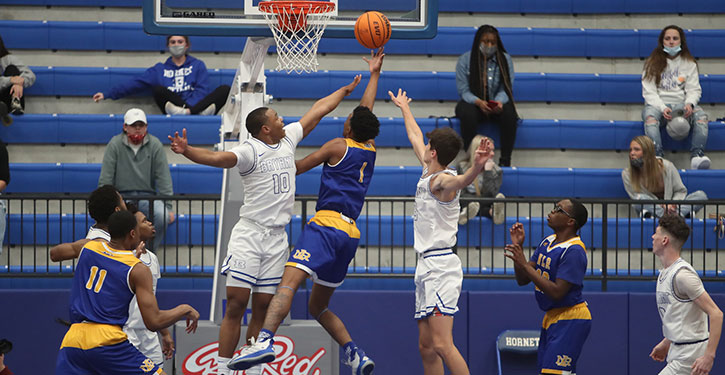 You might think the higher-profile guys for the North Little Rock Charging Wildcats like 7’0” post Kalel Ware or 6’3” senior Tracy Steele would be the ones that might erupt for a 30-point night. Ware managed 15 points, but the Bryant Hornets did a good job of blocking him off the boards and he was limited to five caroms, all on the defensive end.

And Steele was held to 8 points by Bryant senior star Camren Hunter.

But 5’8” senior guard D.J. Smith rang up 34 points including nine of 10 shots from the field in the second half and 5 for 5 at the free-throw line. He scored his team’s last 11 points including a 3 that made it a two-possession game with just :55 left, sparking the Cats to a 72-64 win at Hornet Arena.

Smith wasn’t the leading scorer in the game, however. Hunter scored 36 to go with a team-high nine rebounds, two blocks and four steals while slowing down Steele on the defensive end.

Hunter’s 18-foot jumper with 1:09 left had the Hornets within 65-64 but they could not score in the final minute.

Smith, with all his offensive heroics also came through with the defensive play of the game. After Kade Ruffner had hit two free throws for the Hornets with 2:11 left to play, Cory Nichols made a steal and fed Hunter who appeared to be on his way to a go-ahead layup and, perhaps, a three-point play. There was contact, but Smith had hustles back and blocked the shot, ripping the momentum away from the Hornets.

At the other end, he drove for a basket to make it 65-62 leading to Hunter’s long jumper that Smith trumped with his 3.

In the final :40, Smith converted all four of his free throws to extend the margin, making it look a little more comfortable for the Wildcats than it actually was.

“I’ve never seen Cam get chased down and have a block like that in transition,” said Hornets head coach Mike Abrahamson.

Later, the coach added of Hunter, “He was a little gassed at the end, as you can imagine. He’s doing a lot for us. We need to figure out ways to not be in that position. That’s on me to try to figure that out.”

The game was a battle for second place in the 6A-Central Conference. Both teams came in with a lone league loss to Little Rock Central. North Little Rock 80-73 on Jan. 5. Bryant 67-64 on Jan. 12. The Wildcats are now 10-1 overall and 4-1 in league play. Bryant is 11-2 and 3-2 going into a home game against Cabot on Friday. On Tuesday, the Hornets turn around and play at North Little Rock.

“Smith was amazing,” said Abrahamson. “Everything he did tonight, I’ve seen him do it. That being said, that’s also the best game I’ve seen him play. I’ve seen him score in the 20’s and have really good games. Tonight, he was just amazing.

“What he’s so good at, no matter how you try to guard him, he can do something to counter that,” he added. “He’s lightning quick. He changes direction really well, has great body control. So, I think it was more of him just stepping up and attacking the space that was there. And, quite honestly, we didn’t have an answer for it.

“Ware is a tough match-up for us,” the coach acknowledged. “We let him get position too many times where he could just turn and shoot over us. And Steele is just a guy that’s going to step up and make a big play. The guy’s a winner.

“I thought our kids played hard, but those kids made more winning plays to get the victory,” he concluded. “We gave up 28 in the first half and 44 in the second half. Giving up 44 in a half is probably not a good recipe for success for us.”

With Hunter scoring 14 points in the first quarter, the Hornets held a 16-14 edge at the break. Nichols, who finished with 13 points before fouling out, had the only other basket.

Ruffner finished with 8 points but the Hornets had a scoring hole where they don’t usually. Sharp-shooters Aiden Adams, Gabe George and Austin Schroeder are usually good for a couple of 3-points apiece, but they were shut out by North Little Rock. The Charging Wildcats, with those big guys — Ware and 6’8” Ubong Etim — in back of the defense could take some risks and extend their defense. It was a struggle getting open looks beyond the arc for Bryant.

Hunter wound up 15 of 15 at the free-throw line as he attacked the basket.

Free throws by Steele and Smith trimmed the advantage to a point before Jalen Montgomery drove the baseline for a layup and, moments later, Will Diggins got free inside for a basket to make it 31-26.

But Smith closed out the scoring will a pull-up jumper, making it a three-point game at the half.

The Hornets maintained a slight advantage through the first half of the third quarter. Ruffner had a 3 along the way that had the Hornets up 39-34.

Ware posted up for a basket, but Nichols drove to the rack in response.

It was at that point that the Hornets went a little dry on offense. Ware scored again and, off a Bryant miss, Smith drove for a basket. Off another Hornet miss, Smith hit a pull-up jay from the elbow to give his team a lead.

After a timeout, Hunter drove for a basket to put the Hornets back on top. Ware scored and Hunter hit two free throws but then Smith came through with a three-point play.

Smith extended the lead with a steal and layup. Mario Frazier followed up with a basket to give the Cats a 53-47 lead.

Steele missed and North Little Rock called a timeout as Schroeder grabbed an offensive rebound and was fouled. He converted once to make it 61-58. Nichols followed with a theft that he took the other way for a layup as he was fouled. His free throw, which would’ve tied the game, refused to fall.

After another timeout to save a loose ball possession, Smith just took over. He hit a 15-footer to make it a three-point game. Ruffner nearly came up with a three-point play trying a reverse layup off a baseline drive. He got to the free throw line and converted twice to make it 63-62.

“They just made more plays than us. Credit to them. Our guys made a lot of plays too but they made more.”