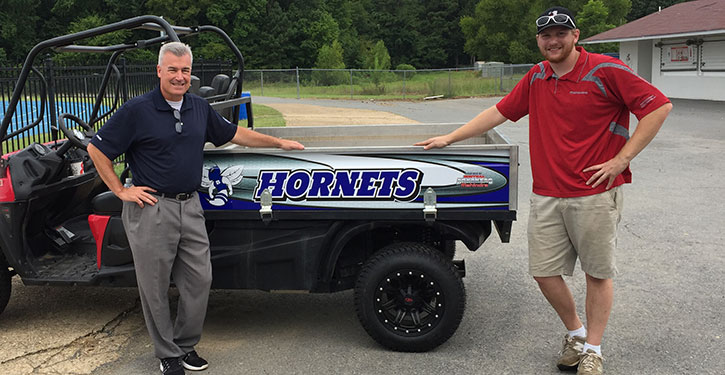 Kelton Sanders, owner of Central Arkansas Mahindra (20014 Arch Street in East End), presented a new Mahindra side by side to Bryant athletic director Mike Lee today for use by athletic department programs.

“We just hope we can be a partner for years to come,” Sanders said. “Hopefully, this thing just keeps getting bigger and we can help them out and support the community.

“Kelton reached out to us and, man, it was a blessing for sure,” Lee said. “This is something that we’ve entertained before. We’re in desperate need of a side by side. We have so much — our athletic trainers are going to be able to use this, our football coaches.

“Then you transition into the spring with our soccer coaches and our track coaches,” he continued. “Plus, we’re going to be able to use this vehicle around our other athletic venues as well. Mainly, here at the stadium because we’ve got so much going on. But we’re going to be able to use it in the spring with baseball and softball and all of them.”

Of his company, Sanders said, “I’ve been a dealer for three years now. I started with a lawnmower shop then we started selling tractors and currently we’re the fifth dealer in the nation. So, we sell more Mahindra tractors than everyone but five dealers. We have excellent service. We sell UTV’s now. Mahindra makes UTV’s now out of Batesville. So you’re really supporting Arkansas.”

“It’s a true blessing,” Lee added. “We can’t thank Central Arkansas Mahindra enough for donating this to Bryant athletics and developing this partnership, which, hopefully, is sustainable for many years.”