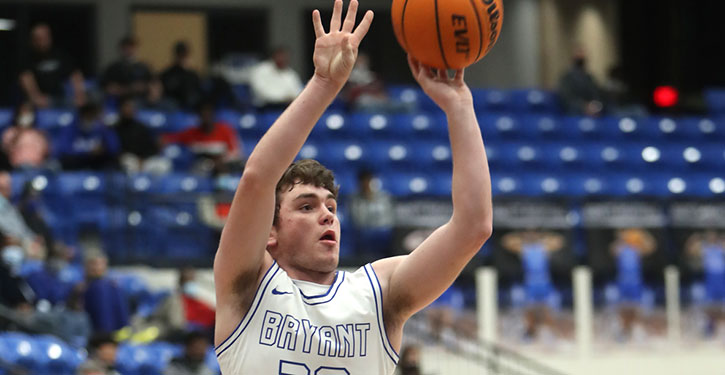 Central hangs on to edge Hornets in first-place battle

Hornet Arena has been good to the Little Rock Central Tigers. Last spring, when the new Bryant gym was the site of the 6A-State Tournament, the Tigers, a number four seed from the 6A-Central Conference, got on a roll and won three games to gain a berth in the State title game.

That was a game that never got played as all the State basketball finals, annually played in Hot Springs, were cancelled due to the rapid spread of the coronavirus.

The new Bryant gym turned a year old earlier this month and the Tigers returned to take on the Hornets, newly-minted the number one team in the state by the Arkansas Democrat-Gazette.

The two teams were tied for the lead league coming in.

Central, which came in ranked number three, took a 65-62 lead on a tip-in by Annor Boateng with :13 left. After Bryant’s Cory Nichols and Central’s Bryson Warren traded free throws, the Tigers held a three-point lead with :05.9 left.

After both teams took a timeout, the Hornets worked the ball in nicely to senior Camren Hunter who worked his way to the top of the key where he got a clean look at the 3-pointer that would’ve tied the game. It was on line, but came off the back of the iron.

Central had held on for the victory, pinning the first loss on the 10-0 Hornets, in a game fitting two of the best teams in the state.

“Two pretty good teams out there,” acknowledged Hornets head coach Mike Abrahamson. “I can live with that against a really good team. It’s really a challenge for us to guard them.

“I can live with it because we used all our timeouts and did everything we could do,” he explained. “Our kids played as hard as they could and, under the circumstances, we got a decent look there at the end.

“It looked good,” the coach said of the last shot. “Just a little long. He got a clean look from a spot he can make it from. So, I’m good with it.”

Hunter finished with 27 points. Warren had 26 for the Tigers, who had four players score, all in double digits. Bryant hit 11 3’s but, through three quarters, was awarded with just three free throws while Central converted 16 of 17 at the line for the game. The Tigers were 4 for 4 from the stripe in the fourth quarter.

“That was a factor,” Abrahamson acknowledged. “We’ve got to do a better job of guarding them. We got beat off the dribble a lot tonight. That’s why they’re so hard to guard. Most of them can really shoot it and they all can take you off the dribble as well. It’s quite a challenge. They space the floor really well. Very tough match-up.”

Other than that, the game was as even as it ended. The Hornets forced 15 turnovers while committing only 10. The Tigers out-rebounded Bryant 24-21.

Despite tough defense by Bryant, Central scorched the nets at a 59 percent clip (23 of 39).

“I love our kids,” said Abrahamson. “I thought they played really hard. You know I think we can play better in some areas. But you can’t fault the effort and we’re going to learn from it and come back tomorrow and practice just like we would have if we had won.”

The game was tight throughout. Central’s largest lead was 6, midway through the first quarter and in the fourth quarter as late as the 1:36 mark when it was 63-57.

Bryant’s largest lead was 7 inside the final three minutes of the third quarter.

None of those largest leads lasted long.

At the end, the Hornets rallied. Hunter hit two free throws and, off a pair of missed 3’s by the Tigers, he came down and drilled a triple to make it 63-62.

After taking a timeout with :48 left, the Hornets put the clamps on the Tigers defensively. They worked until the :21.7 mark and Central head coach Brian Ross called a timeout. When play resumed, the Hornets forced Warren into a tough shot that missed. But Boateng was there with the tip in with :13 left.

Aiden Adams went on a 3-point spree for the Hornets in the third quarter, knocking down three of them to fuel the push to the 7-point lead. The first countered a three-point play by Warren. Boateng scored with a 12-foot jumper but Hunter posted up for a basket. Kade Ruffner followed with a steal. He fed Adams for another triple to make it 45-38.

A three-point play by Hudson Likens was answered by another trey from Adams off a dish from Jalen Montgomery. Bryant led 48-41 with 2:06 left in the third.

A drive to the hoop by Corey Camper and another three-point play by Warren before the end of the quarter had Central within 48-46.

And they had a chance to tie or take a lead in the closing seconds. Camper drove the lane and scored as he collided with Adams. After consultation, a foul was assessed to both players with :01.1 showing. Bryant was awarded the ball on alternating possessions which meant that the Hornets wouldn’t get the ball to start the fourth quarter.

Central got it and took advantage with a 3 by Likens. From there, the game went back and forth. Nichols attacked the basket and was fouled, making a free throw to tie it at 49 with 7:27 to play.

Warren and Hunter traded 3’s then neither team scored for over a minute before Camper got a layup off an alley-oop pass. Nichols hit a free throw to cut the lead to 1 but Likens nailed a 3 and Warren scored off a drive to push the lead to 59-53.

Hunter drove and dished to Will Diggins for a basket, but Camper hit a driving jumper and, after Nichols hit two free throws, Boateng converted twice at the line to make it 63-57 with 1:36 left.

The game had been tied at 7 after a quarter. Central built its first six-point lead at the 4:05 mark of the second quarter. But Ruffner popped a 3 and, after Warren hit two free throws, Hunter drained a triple to make it 21-19.

Camper scored but Hunter hit another 3 to make it a one-point game. Central committed a turnover and Hunter fed Diggins who was credited with a basket on a goal-tending call. Bryant led 24-23.

Likens hit two free throws then Hunter made a steal that led to basket for Ruffner as the lead seesawed. Warren hit a jumper in the lane but, with :03.6 left, Ruffner took a kick-out pass from Hunter and knocked down a 3 that put Bryant up 29-27 at the half.

A dunk by Boateng tied the game to start the third quarter but a 3 by Austin Schroeder put the Hornets back on top and they held a lead through the entire third quarter.

The Hornets play at Little Rock Southwest on Friday.