NORTH LITTLE ROCK — With 1:21 left to play, Bryant senior guard Brantley Cozart drove toward the[more] basket, drew the defense and dumped a pass off to Quinton Motto on the baseline. Motto took it to the rack and scored to trim the North Little Rock Charging Wildcats’ lead to 46-45. 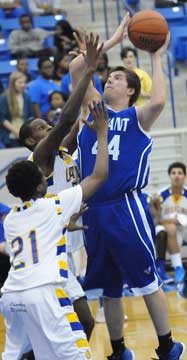 The Wildcats, in turn, began to work the clock with Bryant trying to play tough defense without fouling yet.

With just over a minute to play, the Hornets appeared to get a big gift when North Little Rock’s 6-5 center, Thomas Alexander, found himself open at the top of the key and decided to launch a 3-pointer.

With the rebound, it figured that the Hornets would have a great chance to regain the lead. But somehow North Little Rock’s Cody Ware came up with the carom, scored and was fouled with :59 left. He added the free throw, making it a two-possession game.

Cozart, who canned a pair of 3’s in the first quarter of the game, couldn’t get a long-range jumper to go in response. Ware rebounded and was fouled with :42.8 on the clock. He converted once to make it 50-45.

As the Hornets worked for an answering basket, the Wildcats, with fouls to give, committed their fifth team foul of the half with :32 left. Bryant set up to inbound the ball on the baseline. Senior Jordan Griffin thought he had found teammate Marcus Wilson open in the corner — spot from which he had drained a trio of triples in the gam — but his pass was intercepted by Ware.

With :27 left, Gary Vines extended the lead to 52-45 with a pair of free throws, all but putting the game away.

With :21.3 to go, Bryant’s Anthony Black was fouled on a drive to the basket. He converted his first shot and, when his second came off the iron, Motto battled for the rebound and stuck it back in to make it 52-48.

But that was the last of the Hornets’ scoring. A late free throw by Dayshawn Watkins for North Little rock set the final score at 53-48, as the Hornets suffered another gut-wrenching defeat.

Now 10-8 overall and 2-4 in the 7A/6A-Central Conference, the Hornets face a near must-win situation at home on Friday against Little Rock Central.

Of the team’s four league losses now, two have been by 4 points and now another came by just 5.

“There’s not much room for error in this league and against this team which is exactly what I told (the team before game),” commented Hornets head coach Mike Abrahamson. “I believe that we’re a good team and we’re capable of doing great things and winning games. But we have to rebound. We can’t turn the ball over. 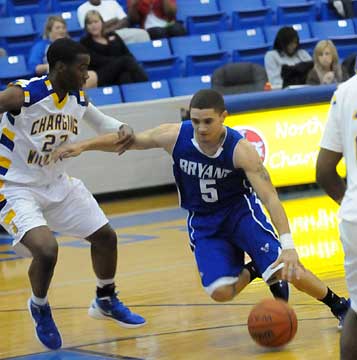 “Rebounding hurt and our transition defense hurt us,” he related. “And, yet, at the same time, they hit some tough shots. And we had a couple of turnovers late when we’re trying to come back. Every turnover hurts but when you have them in crucial situations, you can kind of see your team get deflated a little bit.”

After leading most of the first half, the Hornets scored just 6 points in the third quarter. Still, they were tied at 36 after a layup by Griffin off a nice dish from Cozart then a baseline drive by Motto. With :35 left in the period, however, North Little Rock’s Tyree’s Hollister drained a 3 to give his team the lead going into the final period.

Hollister opened the fourth-quarter scoring with another triple to give his team its largest lead of the game to that point. The Hornets rallied, however. Wilson knocked down another troika and, after a miss by Watkins, Griffin found the range for a tying trey with 5:19 left.

North Little Rock called a timeout and, out of it, found the hot-shooting Hollister again from the right corner. That 3 gave the Wildcats the lead for good.

Griffin hit a free throw with 3:51 left to make it a 2-point game and a Wildcat turnover gave the Hornets a chance to tie or regain the lead. After a timeout, however, they suffered a turnover on a tipped pass.

Ware converted a free throw but the Hornets were still within 3 with 3:07 to go. A turnover cost them their first chance but Watkins missed again and they got another opportunity. Cozart couldn’t get a 3 to go but teammate Leon Neale grabbed the rebound on the off-side of the basket. It took him a second to get a good grasp of the ball for a follow. He got the shot up and in but it was waved off as the officials ruled he had shuffled his feet.

Ware misfired which led to the basket by Motto that set the final series of events in motion much to the Hornets’ frustration.

Hollister finished with 20 points, Watkins with 11 and Ware with 9 for the Wildcats. Griffin’s 17 led Bryant. Wilson added 9, Cozart and Motto 8 each. 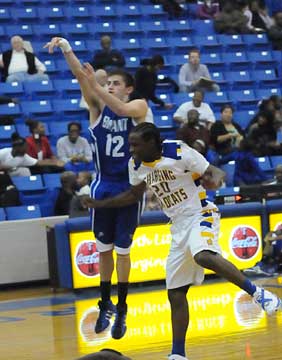 “Hollister is a really good player and he did the same thing against us last year in this gym,” Abrahamson recalled. “He’s a tough kid. They’re so athletic and talented. They can make a run at any time. It’s like they can just turn it on. We had trouble withstanding that tonight.”

The Hornets fell behind 4-0 quickly in the game and Abrahamson called a quick timeout less than a minute in. Wilson got the Hornets on track with his first 3 then two free throws by Griffin had Bryant ahead.

North Little Rock managed a lead of 13-10 before Zach Cambron scored inside for Bryant and, after a Watkins miss, Griffin drained a trey to put the Hornets back on top.

Watkins tied it at the free-throw line but when Cozart buried a 3 off an inbounds play, the Hornets were back up 18-15, a score that held when Motto took a charge wiping out a basket by Hollister.

The Wildcats were able to pull even with Bryant at 20 early in the second quarter but Jalen Hewett hit the offensive glass, was fouled and converted a free throw. Later, Motto and Griffin worked a nice give-and-go for a basket that had the Hornets back up by 3.

North Little Rock surged to a 26-25 advantage but Wilson’s triple and a buzzer-beating bucket by Cozart had the Hornets up 30-26 at intermission.

Again, the Wildcats pulled even early in the new quarter. It was 30-30 before Motto scored inside to put the Hornets back up at the 6:13 mark. But that was Bryant’s last basket for a while and North Little Rock pushed to a lead of 36-32 before Griffin got the Hornets back on track and Motto tied it.

“You have to give credit to them,” Abrahamson said. “They really stepped up their defensive effort in the second half and made it hard for us. We tried to get it inside a little bit more and we didn’t have any success there.”