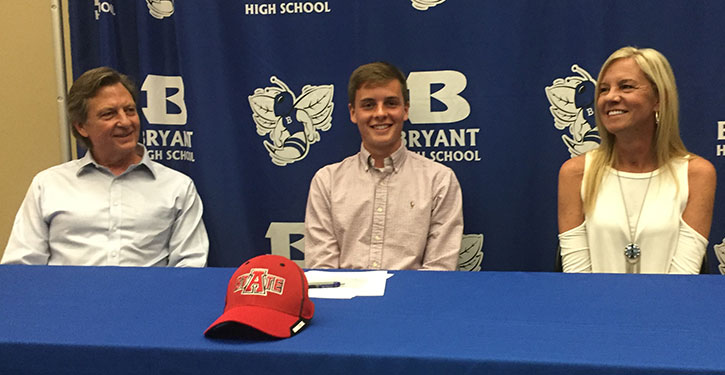 Before every cross country meet, the members of the Bryant Hornets get together and sing that song, made famous by Marvin Gaye and Tammie Terelle back in the 1960’s but revised by the movie “Remember the Titans”.

“That got started 10 years ago,” recalls Hornets head coach Steve Oury. “That crew I had started singing it before meets and every year I keep thinking it’s going to die and it doesn’t. They get together and sing it. I’m usually walking away and shaking my head. But it’s a pretty cool tradition.”

Going into the 2016 season, in fact, Oury’s senior leader on the cross country team was a soft-spoken, leader-by-example kind of guy named John Carder.

“There’s always somebody that has to start it off and John just stepped right into that,” Oury said. “I kind of worried about whether he’d feel comfortable doing that but he did great.”

Carder also proceeded to go out and do great in the competition. He was the individual champion in the 7A-Central Conference meet and earned all-State honors by finishing sixth at the Class 7A championship meet. For the second year in a row, he represented Bryant and the state in the annual Arkansas-Oklahoma All-Star meet.

This spring, he has overcome a nagging injury to score well in the mile and two-mile turning in personal best times including the second-best 3200-meter clocking in the rich distance-running tradition at Bryant High School.

And as he and his teammates prepare for the 2017 conference meet on April 27, Carder, the son of Marty and Mac Carder, officially signed a national letter of intent to continue his education and running career in cross country and track at Arkansas State University in Jonesboro.

“I started running in eighth grade,” Carder related. “I really just got into it to get out of football but then I figured it’s one of the best things I’ve ever done even though it was just suffering basically. But it’s a good kind.

“And you can make a bunch of friends there,” he added. “I kept training over the summer. That’s the most important part, the summer. And just continued to improve.”

“John is an incredibly hard worker,” Oury said. “He’s been improving steadily throughout his career and I think it’s a testament to his work ethic. He has talent but he’s one of those kids that made the absolute most of the talent he has. He’s usually one of the last guys to leave every day, stays after practice to do work, anything to get better.

“I have no doubt he will handle the demands of college, both academically and athletically because he’s already doing college-level workouts,” the coach mentioned. “His mileage is basically at college level. So I think he’ll have a pretty smooth transition to the college regimen and the academic load. He’s basically already there.

“It’s been a real pleasure to coach him because he’s just a high-quality kid,” he said. “I can’t say enough good things about him.”

“I’d been running a couple of good times before that,” he said. “I met up with them at State. They asked me if I wanted to go for a visit and he gave me his email and stuff.

“I took a visit with a couple of other Arkansas runners and I really liked the campus,” he continued. “I liked the community and the people. All the athletics and everything was big there but also it seemed like a pretty good academic school. I liked the smaller community, kind of like Bryant. And it’s not too far away from home so I can come back on the weekends.

“There were a couple of other smaller schools like Hendrix and Rhodes which are private colleges but I just liked the people coming into A-State a lot more,” Carder said, referring to the other freshman committed to the program.

He was not much more than a freshman in high school when Carder saw he needed to assert himself a little.

“I feel like in cross country season in 10th grade I was still trying to get up there because Charlie (Terry) was still here,” he related. “Once he left, it was really just me and some other ninth graders that came up. It kind happened when he graduated.

“I continued just to do the same thing I’d been doing, just kept running more and built on what I’d already done,” Carder said.

“He’s soft-spoken but, at the same time, he understood that he needed to be that leader,” Oury mentioned. “So he stepped up and he did it without changing his personality. When he talked the kids listened.”

JV Hornets vs. Rockets
Central throws a bump in the road for Lady Hornets