Coach a casualty during Lady Hornets’ 15-1 romp over Belles 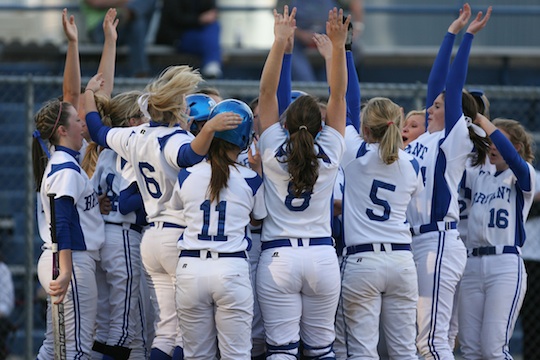 Bryant Lady Hornets softball coach Debbie Stepp has been known to run a marathon every once in a while but, after Tuesday night, it may be some time before she does so again.

Late in her team’s 15-1 win over 7A-Central Conference rival Mount St. Mary Academy, Stepp, in the third-base coaching box, was hit by a line drive on the foot or ankle that left her limping in pain unable to continue. At best, she was severely bruised. At worst, she suffered some kind of break.

The game was all but over at the time. The Lady Hornets were finishing up a six-run fourth inning that capped the scoring.[more] 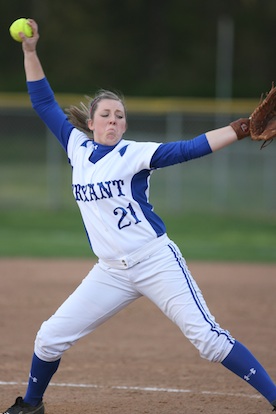 Pitcher Kayla Sory retired the Belles in the top of the fifth to finish her one-hitter. She walked one, hit a batter and struck out seven. The only run she gave up was unearned, scoring on that lone hit, a double by Maci McCannon in the top of the second. Emily Elmore, who had been hit by a pitch to start the inning then advanced on an error, scored the run.

With runners at second and third, Sory got out of the inning with a strikeout and a tap to the right of the pitcher’s circle that she flagged down. With no one able to get back to cover first, Sory raced to the bag to beat the baserunner to end the inning.

Offensively, the Lady Hornets took advantage of 10 walks with 11 hits including a solo homer by Shanika Johnson. Sory, Kelsie Works and Johnson each had two hits in the game.

Bryant’s seven-run first took most of the mystery out of the outcome. The inning began with a walk to Jenna Bruick. Cassidy Wilson got a sacrifice bunt down and reached safely on an errant throw that allowed Bruick to take third. She held, however, as Wilson advanced to second on a wild pitch.

A rare walk to the free-swinging slugger Jessie Taylor loaded the bases for Peyton Jenkins whose grounder to short was booted bringing home the first run. Sory walked to force a run home and, an out later, Works laced a two-run single to make it 4-0.

Consecutive walks to Carly Yazza, Hannah Rice and Bruick forced in two more runs and another scored when Wilson grounded into a force at second. 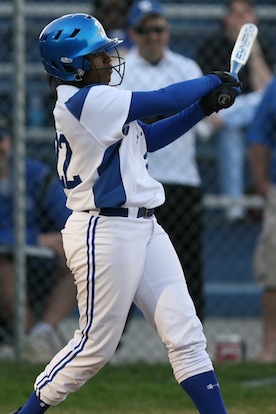 After the Belles got on the board in the top of the second, the Lady Hornets pushed two more home in the bottom of the frame. Sory doubled down the left-field line with one out. Johnson walked then Works blooped a single to right. Courtesy runner Bethany Smith, in for Sory, tried to score from second on the play but was thrown out at the plate. Johnson wound up at third and Works at second. Wild pitches enabled both of them to score, making it 9-1.

In the bottom of the third, Sory issued her lone walk. After a force out and a flyout, a liner back at the Bryant pitcher, ricocheted off her glove toward Wilson at short. It deflected off her glove and rolled toward second just in time for Bruick to pick it up and get the force out to end the inning, pinball-style.

Johnson started the fourth inning with her second homer of the season. After Works was robbed of a third hit, Yazza walked. Hannah Rice grounded to short but an error allowed her to reach as Yazza got to second. Bruick’s infield single loaded the bases for Wilson who walked to force in a run. Taylor belted a two-run double then Jenkins singled to plate two more, setting the final score.

Sory followed with her second hit, a single to left, then Johnson lashed the foul liner that inadvertently nailed her coach.

The top of the fifth was highlighted by a nice catch in center of a sinking drive by Stephanie Cyz.

Now 11-0 overall, the Lady Hornets improved to 3-0 in conference play. They return to action against another league rival, Russellville, at home on Tuesday, April 6.