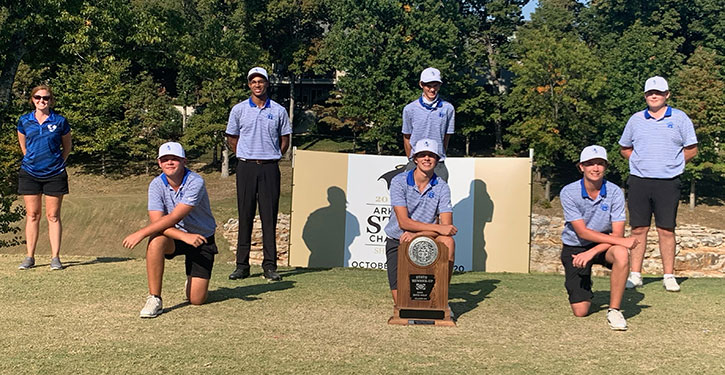 ROGERS — After capturing the program’s first conference championship in golf since at least 1999, the Bryant Hornets held on to their second place standing on day two of the Class 6A State Tournament at Shadow Valley Country Club on Wednesday.

Hornets’ junior Daniel Taylor, who led the tournament with a round of 70 on Tuesday, winning individual medalist honors in the Conference, shot an 82 on the second day to finish at 152, tying Alexander Apolskis of Bentonville and Andrew Fakult of Rogers for third place behind co-leaders Phisher Phillips and Michael Senn, both of Bentonville, who finished at 148.

In a playoff for third, Taylor won out.

Wednesday’s best round for the Hornets was carded by Logan McDonald. His 77 gave him a two-day total of 153, just a shot behind Taylor, Apolskis and Fakult.

Both Taylor and McDonald earned all-conference and all-state honors. Taylor and perhaps McDonald will advance to play in the State Overall, featuring the top players from each classification next week. The tournament will be played at Pleasant Valley Country Club on Oct. 15.

“Everyone but Bentonville struggled today,” said Bryant head coach Casey Mattox. “But we held onto runner-up. Daniel played well in the playoff to finish third overall.”

In addition, Braedon Boyce, who shot 88 on Tuesday turned in a 104 on Wednesday.

The all-conference and all-state honors from Taylor and McDonald come on the heels of Bryant’s Caitlin LaCerra earning those achievements at the girls’ state tournament at Hurricane Golf and Country Club last week. She shot 89-80 169 to finish 10th overall.