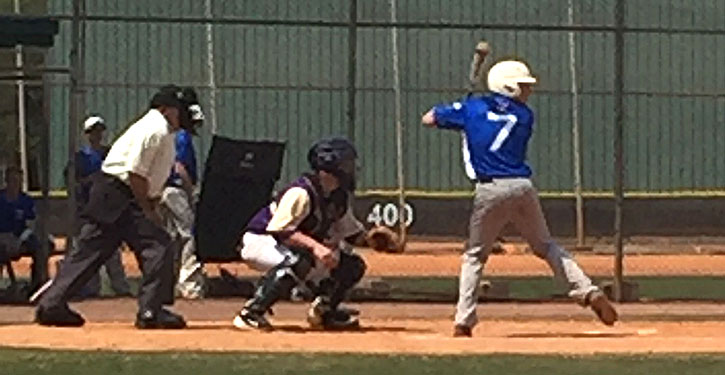 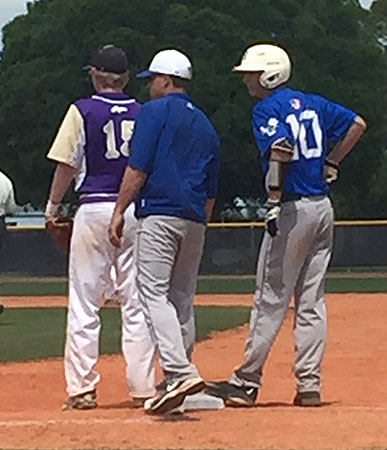 TAMPA, Fla. — The Bryant Hornets rallied with two runs in the top of the seventh inning to tie the Plum Mustangs of Pittsburgh, Pa., only to have a disputed balk call in the bottom of the seventh result in a 4-3 loss on Thursday at the Walter Fuller Sports Complex.

The game was considered a preseason scrimmage, according to Bryant head coach Travis Queck, because the season hasn’t officially opened for the Pennsylvania team. They’re set to play their first game on April 7.

The Hornets freshmen are set to play on Friday to wrap up the annual trip for the team. They’ll take on another Pennsylvania team, South Fayette of McDonald.

In the bottom of the inning, Bryant reliever Myers Buck struck out Plum’s Ryan Kircher to start the inning. Will Rumcik reached on an error, however, taking second on the play. With Jason Maltese at the plate. On a 1-0 count, the batter tried to verbally call timeout.

“That made Buck stop,” Queck related. “He thought it was the umpire. But the umpire never granted the time and once Buck stopped he was called for a balk. Now the balk was caused by the batter’s verbal queue which should have voided the balk call.”

Despite Queck’s protests, the call stood. Maltese proceeded to walk and, on an 0-2 count, after an unsuccessful pickoff play at third, Markus Cestra hit a sacrifice fly to Matthew Sandidge in center to win the game.

Tucker, in his first outing since a clutch performance in a conference win over Little Rock Catholic last week, went five innings, scattering four hits, walking two and fanning one.

He worked around a one-out walk in the first and an infield hit by Nick Frazetta in the second, erasing the runner with a pickoff. The Mustangs were retired in order in the third.

Meanwhile, the Plum starter Michael Anderson only worked one inning, pitching around a two-out single by Cameron Coleman. In the second, Gino Marra relieved and, with one out, surrendered a single to Scott Schmidt and a walk to Beaux Bonvillain. But the Mustangs turned a doubleplay to escape.

The third inning for the Hornets included one-out singles by Jake Wright and Tucker along with a walk to Coleman to load the bases. But another doubleplay kept the game scoreless.

In the fourth, Coby Greiner reached when his drive to center was misplayed. Schmidt sacrificed him to second. Bonvillain followed with a bouncer to Maltese at short who tried to get Greiner at third. But Greiner got in safely as Bonvillain reached first.

Buck followed with a squeeze bunt the put the first run on the board.

A one-out single and a wild pitch came to naught for the Mustangs in the bottom of the inning. In the top of the fifth, Coleman managed a two-out single but was stranded.

Tanner Froelich’s double started the bottom of the fifth. Tucker induced a grounder to Schmidt at second as Froelich took third. A single by Josh Kirkpatrick tied the game.

Plum managed to load the bases but Tucker escaped by getting Cestra to bounce out to Logan Chambers at first.

Dom Carlisano relieved for the Mustangs in the top of the sixth and Greiner greeted him with a single to left. But he was caught trying to steal second and the Hornets couldn’t get anything going.

Buck relieved in the home sixth and issued a lead-off walk to Justin Sembower. Alex Terell singled and Froelich sacrificed the runners to second and third. They held there as Buck got Frazetta to roll out to Schmidt at second. But, on the next pitch, Anderson blooped a double to right-center to get both runs home.

The Hornets’ rally started with Buck working a walk. Sandidge waited out a free pass as well. With one out, Tucker pulled a single to left to load the bases.

Jackson Rodgers relieved for the Mustangs and surrendered a sacrifice fly to Coleman to make it 3-2. Sandidge tagged and went to third on the play. With Chambers at the plate, the count went to 2-2. Rodgers tried a fake-to-third, throw-to-first pickoff. Tucker, who had extended his lead off first to try to draw a pickoff throw, took off for second and the relay from the first baseman was wild allowing Sandidge to score the tying run.

Tucker hustled to third but was stranded when Chambers’ flyball hung up in the 20-mile-per-hour wind and was caught to end the inning.

The Hornets will return to Bryant this weekend. They resume play in the 7A-Central Conference on Tuesday when they host the Little Rock Central Tigers.