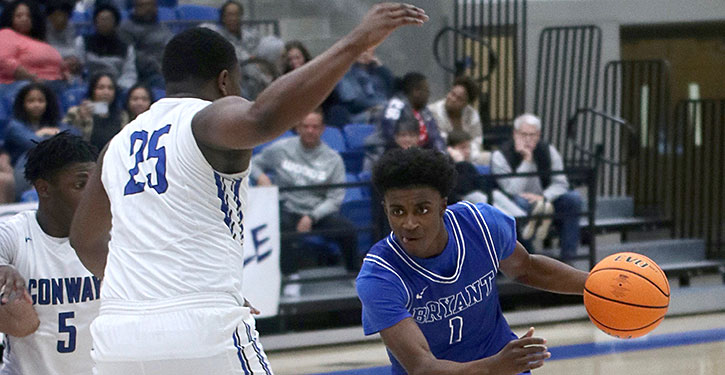 Conway hands Hornets a third narrow defeat in a row

CONWAY — Prior to the 6A-Central Conference showdown between the Conway Wampus Cats and the Bryant Hornets at Buzz Bolding Arena Friday night, the Cats honored senior Caleb London as the latest member of their 1,000-point club.

But the game was a struggle for him. The Hornets held him to 11 points, five on free throws.

If Bryant head coach Mike Abrahamson had been told before the game that London would be 3 of 15 from the field and only score 11, he probably would’ve thought his team might be on its way to a win.

But Conway got a big lift from 6-5 junior Jaylin Williams who scored 17 points, mostly off the offensive glass. He had 15 rebounds, seven on the offensive end and, from close range, hit 8 of his 10 shots, leading the Cats to a 55-51 win.

The two teams came into the game tied for third in the 6A-Central Conference along with Cabot and Little Rock Central. The loss dropped the Hornets to 11-9 overall and 3-4 against the league going into the second half of the conference schedule, starting next Friday.

It was Bryant’s third loss in a row, all of which they were in position to win.

Conway called a timeout with :41 showing, setting up to try to solve Bryant’s press and drain what was left of the clock.

They got it in and, with :27 left, found Williams behind the Bryant press for a dunk.

A.J. Jenkins drove for a layup but there remained only :02 and Conway held on for the win.

“There was a lot of other things happening, but the game came down to those two possessions eventually,” acknowledged Abrahamson. “I can live with that shot. I liked our patience on that possession.”

The Wampus Cats spent much of the second half face-guarding the Hornets’ top scorer, Treylon Payne, who was coming off a 30-point effort against top-ranked North Little Rock on Tuesday. He finished with 14 on Friday to match Khasen Robinson for team-high honors. Jenkins finished with 12.

“They were doing a lot to take away Payne,” Abrahamson noted. “I liked the kickout 3 from one of our best shooters in the corner. He shot it with confidence. It rimmed out. I can deal with that.”

But the coach was not happy with his team’s play, particularly after playing so well in the double-overtime loss to North Little Rock.

“There’s other parts of the game that led up to that,” he said of the final sequence, “that I don’t feel the same way about.

“It wasn’t a good night for us,” the coach stated. “We weren’t who we are every day in practice and who we were Tuesday night against North Little Rock in terms of energy and a collective unit, all in it together. We weren’t all on the same page on the court.

“One thing that you can point to that shows that is our turnovers, especially in the first half,” he added. “I think we had 10 in the first half. That’s really bad. We did not play well. Conway had a great plan and played us really tough, really took us out of what we wanted to do. Credit to them.”

Conway’s largest lead of the game was 9 late in the third quarter. Tellingly, Williams had all six of his seven offensive rebounds in that period.

“Blocking him out,” Abrahamson said regarding the Hornets’ problems with Williams. “When we get beat off the dribble and our big has to help, you’ve got to get back and block out. That’s easier said than done. But a lot of his stuff came off of offensive rebounds. He was very active and had a very good game. He out-played us tonight.”

Facing that 40-31 deficit, the Hornets whittled on it before the third quarter was over. Will Diggins hit a free throw after being fouled on an offensive rebound. Conway turned the ball over, and Payne drove for a layup to make it 40-34 going into the final period.

A baseline jumper by Adams to start the fourth had the margin down to 4.

London hit a pair of free throws, but Payne drilled a 3 to make it 42-39. After Williams failed to convert on a pair at the line, the Hornets made it a 1-point game on Jenkins drive to the rack. He was fouled on the play but missed the free throw that would’ve tied the game.

Conway surged to a 49-42 lead. With 2:55 left, Adams knocked down a triple and Abrahamson called a timeout to set the Hornets’ press.

One final stickback by Williams frustrated that initially but Catrell Wallace answered off a drive and dish by Jenkins. London missed at the other end and Jenkins came downhill for a layup to make it 51-49.

Conway’s Bryce Bohanon missed the front end of a one-and-one with 1:23 to go, setting up Adams’ ill-fated 3-point try.

In the first half, Conway broke out to a 7-2 lead, but Robinson sparked a Bryant rally. He followed his own miss and, moments later, poured in a 3 to tie it.

Lucas Foster put the Cats back on top, but Payne splashed a triple and the Hornets had the lead. Devin Pitts’ free throw in the final minute made it 11-9 for Bryant going into the second period.

Payne grabbed the carom off a Conway miss and drove the length of the floor for a layup as he was fouled. He missed the free throw, but the Bryant lead was 4.

London and Robinson traded baskets then Jenkins added two free throws. Williams cut it to 17-13 before Jenkins nailed a 3 to give the Hornets’ their largest lead of the game, 20-13, with 4:26 left in the half.

With both Payne and London on the bench with two fouls, the Hornets suffered a drought that Conway didn’t. The resulting 9-0 run erased the Bryant lead. Two free throws by Trey Tull with 2:40 left in the half, put the Cats on top 22-20.

After Adams took a charge to prevent Conway from adding to that lead, Robinson’s pull-up jay in the lane tied it.

But free throws by Paul Harris and Kyler Spencer in the final 40 seconds gave Conway a 26-22 edge at the half.

Williams hit the offensive glass for a basket to start the second half, but Robinson countered with a baseline jumper and followed up with a 3. When Payne drove for a layup, the Hornets had taken a 29-28 edge.

Before the Hornets scored again, however, Conway went on a 9-0 run. Payne hit two free throws to break the drought but a 3 by Jacoby Easley produced the Cats’ 9-point advantage.

The Hornets will now have a week to get ready for Fort Smith Northside, which comes to Bryant next Friday. The Grizzlies came from behind to beat the Hornets, 60-50 on Jan. 10.

Asked about what the team will work on in the interim, Abrahamson reiterated, “We have to play how we practice. That’s why we do what we do in practice, so that we will do it in the games.

“Tonight, we did not do that,” he continued. “We did not push the ball like we want to. We did not play at the pace we want to. A lot of that goes to Conway but not all of it, honestly. We’ve got guys, honestly, that weren’t listening to what they were supposed to be doing. I would tell them what role they had, identify their role. They’d go out on the court and not do it.

“I guess I’ve got to communicate better,” the coach concluded. “We’ve got to define some roles a little bit better. We need to figure out if we need to change our rotations, change our starters, change our defense. We’ll look at the film and evaluate it, look at our roster and evaluate it. We have a week to right the ship. That’s what we’re going to try to do.”