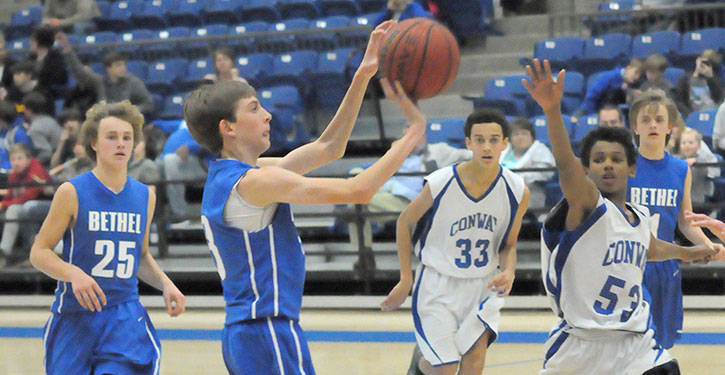 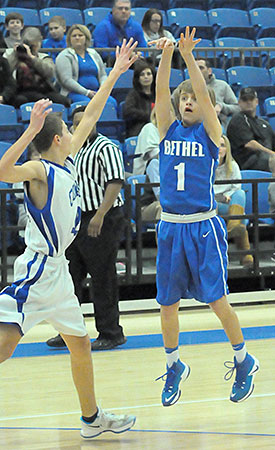 CONWAY — Anyone who was there at the start and at the end on Thursday night at Conway’s Buzz Bolding Arena will surely attest to the fact that the Bryant Blue Hornets eighth grade basketball team of Bethel Middle School. And that, particularly on the junior high level, is as important as anything since these are the training grounds for the future of the Bryant High School team.

Certainly, however, the Hornets would’ve cherished a season-ending victory against the Conway White Wampus Cats. For much of the way, they led. In fact, when Hayden Schrader drove for a basket with 47 seconds remaining, the Hornets held a 45-44 edge.

But that was the last Hornets’ score. An offensive-rebound basket put Conway White back in front just moments later and, on a held ball, the Cats got the ball back, adding a pair of free throws to make it 48-43 with :22.3 showing.

When they couldn’t get an open look right away, the Hornets’ head coach Steve Wilson got a timeout with :12.2 remaining, hoping to set up an open look for a potential tying 3.

The best they could do were a pair of contested looks from long range. Brayden Godwin’s shot from the right of the top of the key came with a hand in his face and missed. But Schrader grabbed the carom and worked out to the 3-point line in the corner. His last-second shot refused for all as well and Conway White held on for the victory.

The Cats built an 8-4 lead in the early stages of the game but that 4-point margin was the largest by either team in the first half. Riggs hit a 3 and, moments later, Robinson grabbed an offensive rebound and scored to give the Hornets a 9-8 edge.

The lead went back and forth with Bethel, on the strength of a Schrader 3-pointer in the final seconds, taking a 15-14 advantage into the second stanza.

The game was tied at 15, 17 and 20 during the quarter. Godwin snapped the 20-20 tie with a steal and layup with :59 left. An answering score by Conway White knotted it back up heading into the second half.

As soon as Schrader hit a free throw early in the third quarter, Bryant had a lead it would maintain throughout the period. Schrader’s second shot rimmed out but Robinson claimed the rebound and fed Godwin who drove for a basket. The 25-22 lead at that point was Bryant Blue’s largest of the game to that point. 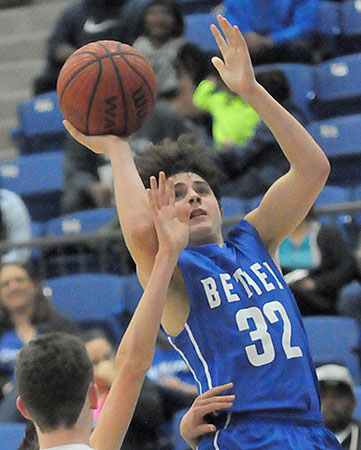 Schroeder’s drive for a layup added to the margin before Conway White picked up its first points of the half with a free throw at the 3:28 mark of the third. After the Cats hit a layup, Riggs got the Hornets back on track with his second 3 of the game. Godwin followed with a steal and a layup to make it 32-25, which turned out to be the largest of the game for Bethel.

The Hornets led 34-30 going in the final five minutes.

Conway White started the fourth with a 6-0 push that produced a 36-34 lead. Schroder answered with a 3 and the lead began to go back and forth. Robinson and Godwin had clutch baskets and Schroeder converted a pair of free throws along the way. That led to Schrader’s drive that produced the Hornets’ final lead. 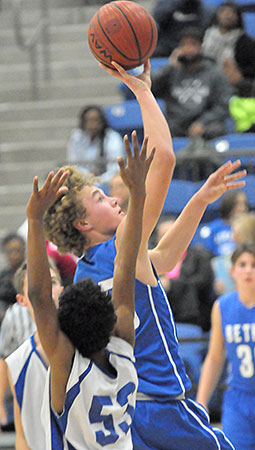