CRESTVIEW, Fla. — Blake Davidson pitched a one-hit shutout and the Bryant Hornets scored 12 runs in the last two innings on the way to a 13-0 win over the Shoals Christian Flame of Florence, Ala., in the pool play at the 2010 Northwest Florida Powerade Classic.

The Hornets pounded out 18 hits and advances to play in the third-place game for the tournament on Friday at 3 p.m., against a team to be determined earlier on Friday.[more]

Bryant is now 13-1 overall this season.

Davidson walked one and struck out four along the way. He pitched around the lone Bryant error and the walk in the first inning aided by a doubleplay. The lone Flame hit was a lead-off single in the third but that baserunner was erased trying to steal by Butler, who was catching in the game. So, over the final six innings, Davidson faced the minimum.

“He had real good command,” stated Hornets coach Kirk Bock. “I think he had 11 ground-ball outs and we turned the doubleplay. He never went too deep in the count and only threw 83 pitches in seven innings.” 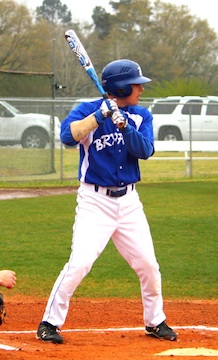 The game was scoreless until the fourth when Bryant broke the ice. With one out, Brennan Bullock singled. He advanced to second when Jordan Taylor’s grounder to the right side forced the second sacker to range far to his left. Butler drew a walk then Pickett stroked an RBI single. Brown followed with a deep drive into the wind in left that held up and was caught to end the inning.

“You could hit it a ton and it wasn’t going anywhere,” Bock noted. “And Brown hit it a ton. It just got caught up in that wind.”

It was still 1-0 going into the sixth. Butler started a Bryant uprising with a one-out single. Base hits by Pickett and Brown brought him around. Both runners moved up on a tap out by Garrett then Joiner singled them both in to make it 4-0. A single by Garrett Bock was followed by a drive down the right-field line by Mayall that went for a two-run triple to cap the inning.

The onslaught continued in the seventh. Taylor reached on an error then Butler cued a single to right. Pickett got a sacrifice bunt down then Brown and Garrett delivered back-to-back RBI singles. Joiner then doubled both of them home to make it 10-0. Pinch-hitter Josh Pultro was hit by a pitch then Mayall singled in Joiner.

When Ozzie Hurt reached on an error as Pultro scored. Taylor walked to load the bags for Hayden Daniel who singled to set the final score.