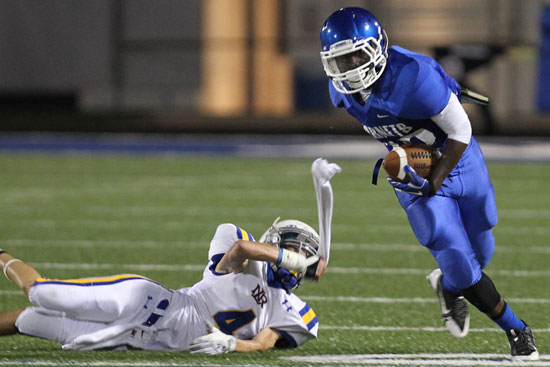 The North Little Rock Charging Wildcats freshman team came into Thursday night’s game at Bryant having outscored two opponents by a combined 50-18. But a tremendous defensive effort by the Hornets limited them to 115 yards of total offense and kept them totally off the board. 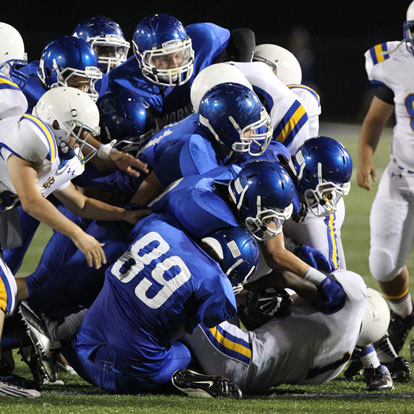 And, with the help of field goals of 26 and 27 yards by Chase Kincaid, the Hornets forged a 12-0 win to bounce back from a frustrating loss at Lake Hamilton the week before.

Especially off the 28-22 loss at Lake Hamilton. 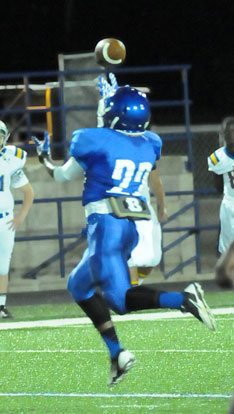 Phillip Isom-Green looks the ball in on an interception. (Photo by Kevin Nagle)

“We changed some personnel around a little bit, to kind of tweak it a little bit,” Horn noted. “We tried some situational personnel with some guys too.  I think that’s helped us quite a bit.

“And it helped tonight because we struggled a little bit offensively,” he noted. “One touchdown. Just some mental mistakes are what’s getting us. We’ll start driving and then we’ll have a miscue mentally and that’ll shut us down. We put ourselves in unmanageable situations. If we can overcome those things, I think we’re going to be okay.

“It was physical,” the coach allowed. “Hey, those guys were big. They’re really strong up front on the defensive line. But we got some plays when we needed them. We didn’t really throw and catch as well as we normally do. Obviously, special teams were big tonight with Chase hitting two in a row. That’s good, that’s a weapon.”

Because it was so physical, Cameron Coleman, who rushed for 167 yards at Lake Hamilton, may have had a more impressive performance rushing for 87 on 20 carries against North Little Rock. He also caught the 15-yard touchdown pass from Beaux Bonvillain.

The game was plagued by 17 penalties, many of them for illegal procedure on the offenses. But a big factor was a few offsides penalties, particularly for North Little Rock. Early in the game, Bryant tried to use the hard count to get the Wildcats to jump into the neutral zone for the penalty but North Little Rock was disciplined and didn’t bite. But, as the game went along, perhaps they tired because they jumped in at some beneficial occasions for the Hornets.

Bryant’s touchdown came on its second possession of the game. The defense had established control of the line of scrimmage on North Little Rock’s opening series. The Wildcats picked up a first down but then a procedure penalty was followed by a sack of quarterback Chase Freeman by Moody and Terry. Later, with the Wildcats facing a fourth-and-6 at the Bryant 35, Moody and Misenheimer tripped up running back Antonio Reed for no gain. 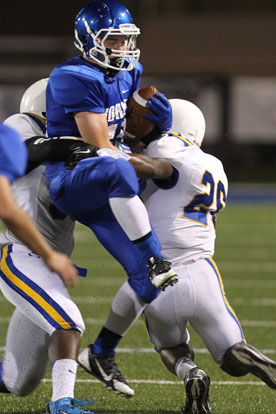 Garrett Misenheimer is sandwiched by a pair of North Little Rock defenders after one of his pass receptions. (Photo by Rick Nation)

With 3:16 left in the first half, the Hornets took over on downs. A third-down pass from Bonvillain to Misenheimer picked up 14 yards and a new set of downs. Moments later, however, the Hornets sent the punt team out on a fourth-and-4 at the North Little Rock 48. Kelly, the Bryant punter who usually uses and Australian-style kick, started it but then pulled up and threw to Misenheimer who turned it up and lowered his shoulder to get to the 40.

A big hit by Isom-Green on North Little Rock’s Daikwon Armond sparked the Hornets defense on the subsequent series. On third down, Moody pulled down Freeman for a loss, forcing a punt.

Bryant, undermined by a hold, was soon forced to punt it back and, thanks to a nice open-field tackle by Allen, North Little Rock was 81 yards away from paydirt with 3:33 left in the half.

But the Wildcats drove to the Bryant 34 before consecutive procedure penalties pushed them back. On a second-and-17 at the Bryant 41, Freeman’s pass was tipped by a Hornets defender and Isom-Green grabbed the deflection at the 30 with :28 left.

A tackle-breaking, field-reversing gallop by Coleman gave the Hornets a chance to go for a score. He picked up 24 yards to the Cats’ 46. On the next play, Bonvillain fired a pass down the left side that Jake East latched onto at the 10.

The Hornets called a timeout with :08 showing and Kincaid came on to drill a 27-yard field goal to make it 9-0. 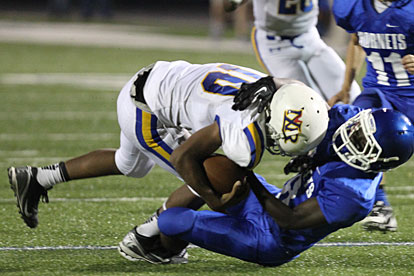 The defense got even tougher in the second half. The teams traded punts with Allen making a big stop for a loss on a third-and-3 to turn aside the Wildcats.

North Little Rock wound up with a field position advantage after a punt that went awry. Freeman scampered for 18 yards to the 18 but, from there, the Charging Wildcats were unable to pick up a first down. On fourth-and-4 at the 12, Fox and Mayes dropped Freeman for a loss after Moody flushed him out of the pocket.

Again the Hornets were forced to punt without picking up a first down and North Little Rock got the ball back at the Bryant 42. Misenheimer made a stop for no gain then Fox dropped Armond at the line of scrimmage. Freeman completed a pass to Katorious Blueford but the Hornets knocked the ball loose and Williams covered it at the 36 with 7:49 left to play. 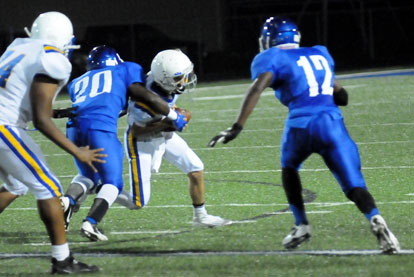 It was then that the Hornets offense stepped up. Not only driving from their own 36 to the North Little Rock 9 but eating time. When Kincaid came on to boot his second field goal, it came with just 1:27 left in the game.

The Wildcats would turn the ball over on downs with :33 left after Allen broke up a pass with a big hit, Knowles stopped a completion short of a first down and a fourth-quarter pass was dropped in traffic.

The Hornets improved to 3-1 on the season with the win, 2-1 in the Central Arkansas Junior High Conference. They travel to play Conway Blue next Thursday. 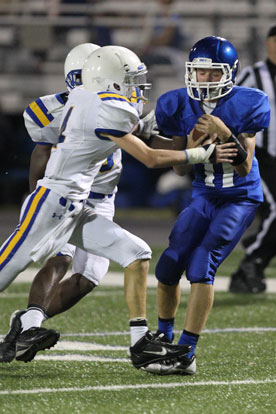 Jake East (11) secures a pass that set up one of Chase Kincaid’s two field goals. (Photo by Rick Nation) 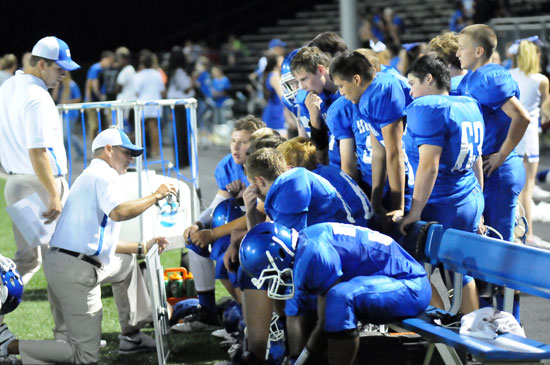