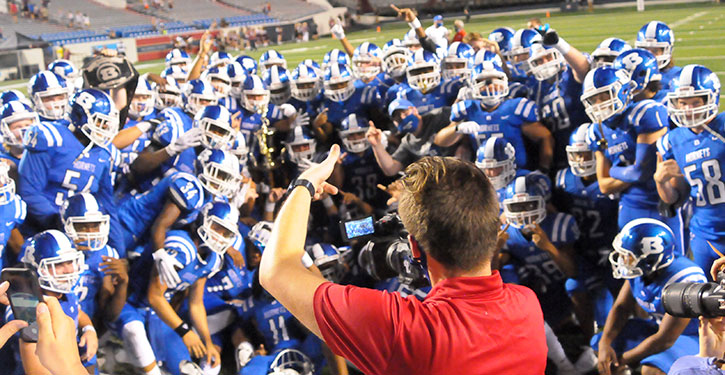 LITTLE ROCK — On a pair of fourth downs in the first quarter of the 2020 Salt Bowl, the inexperienced defense of the Bryant Hornets grew up a little bit.

Benton opened the ball game with an impressive 14-play march from their own 29 to the Bryant 1 when, on a fourth-and-goal, the Hornets, led by senior defensive end Rodricho Martin, senior linebacker Koby Melton and senior tackle Andy Scott, converged on Panther running back Casey Johnson at the 2. And the Hornets took over on downs.

Benton had a first and goal at the 2 but could not score. Hart Penfield made a stop for a loss on first down then Kyle Knox cut down Cain Simmons on a sweep at the 3. Johnson got back to the 1 and nearly scored (and nearly fumbled) to set up the fourth-down play.

Though the Hornets offense would be plenty potent for the night, they only picked up one first down as they rooted out from the 2 before Noah Davis punted Benton back to its own 42.

On second and 10, Johnson knifed for 7 yards to the 49. On third down, Johnson took a pitch around the left side but corner LaQuav Brumfield shucked off a blocker to stop the play a yard short of a first down.

That set up a fourth-and-1 at the Bryant 48. The Panthers went for it only to have ends Brandon Jones and Brayden Godwin meet at the quarterback. Brown, trying to run a quarterback draw, went down for a 4-yard loss.

The Hornets’ defense did its share of bending but not breaking, shutting out the Panthers through three quarters while the offense was racking up a 42-0 lead by halftime and a 48-0 lead after the first possession of the third quarter.

Picking up where they left off in 2019, the two-time defending 7A champions invoked the mercy rule by halftime on the way to a 48-7 victory to once again, claim the Salt Bowl trophy, which has stayed in Bryant since 2005.

Austin Ledbetter completed 9 of 15 passes for 250 yards and four touchdowns for the Hornets. Joseph Young caught three of those, finishing with 3 receptions for 154 yards. Hayden Schrader caught the fourth TD pass.

And if that didn’t frustrate the Panthers’ defense enough, the Hornets piled up 220 yards rushing. Tanner Anderson scored twice and picked up 65 yards on five tries. Newcomer Jamarien Bracey piled up 90 yards on just three totes with a touchdown.

The Hornets’ first three scoring drives lasted three plays, one play, and two plays. They took eight plays on their fourth scoring drive but then again two and five on two more in the final 3:20 of the half.

After Ledbetter threw 28 yards to Anderson to get to the 19, he found Young on a skinny post for the touchdown. Brock Funk’s extra-point attempt was blocked by Hayden Purdy and it was 6-0.

Benton picked up a first down but Hart Penfield sacked Panther quarterback Garrett Brown and knocked them off rhythm. A third-down pass was too long.

On his first run from scrimmage for Bryant, Bracey took a pitch around left end and went the distance, 63-yards for a touchdown.

Benton went three-and-out from its own 10 and Davis returned the punt 25 yards to the Panther 23. A play later, Anderson took a handoff up the middle, made a nice jump cut to the outside and scooted to the end zone.

Hoping to just break the goose egg on the scoreboard, the Panthers attempted a field goal from 34 yards out only to have the holder fumble the snap. Bryant took over at its own 27.

Bracey broke a 24-yard run to get the Hornets out of the hole.

Ledbetter passed to River Gregory for 12 then broke a 20-yard run on a rollout. From the 15, it took a third snap to get to the end zone. Anderson found little resistance as he scored untouched off left tackle.

After a 6-yard Anderson run to the 26, Ledbetter rolled left and found Young behind the defense again for a 74-yard touchdown pass.

This time, Bryant went for a two-point conversion to make it 35-0. Schrader caught his first pass to convert.

On a tunnel screen from their own 29, the Brown found Cameron Harris for 16 yards but, in the cross traffic, Penfield knocked the ball loose and Bracey, in at linebacker, recovered at the 45.

Ledbetter and Schrader combined on completions of 7, 20, and 25 yards to find paydirt. With :43 left in the half, Funk kicked the extra point and it was 42-0.

Bryant amassed 370 yards of offense in the first half. Benton had right at 200.

To start the second half, Bryant got the ball. Bracey ran for 3 yards then Young got behind the Panthers’ defense again and Ledbetter led him right into the end zone for a 62-yard touchdown that made it 48-0.

As was the case so often in 2019, the Hornets’ first team retired for the night.

Benton, working against mostly second-team Hornets, drove from its own 5 to the Bryant 26. On a third-and-9 at the 29, Malachi Carey sacked Brown with help from Tyler Mosley. The Panthers went for it on a fourth-and-15 only to have Brown’s pass fall incomplete.

Bryant turned it over on downs at its own 42 and the Panthers, on three snaps, got into the end zone. Brown’s touch pass to Harris from 16 yards out put the points up.

The Hornets, behind sophomore quarterback Cory Nichols and sophomore running back Chris Gannaway wound up eating the final 4:57 of the game.

Bryant is set to return to action next Friday night in Marion. Benton takes a week off before trying the new Little Rock Southwest team, the Gryphons on Friday, Sept. 11.