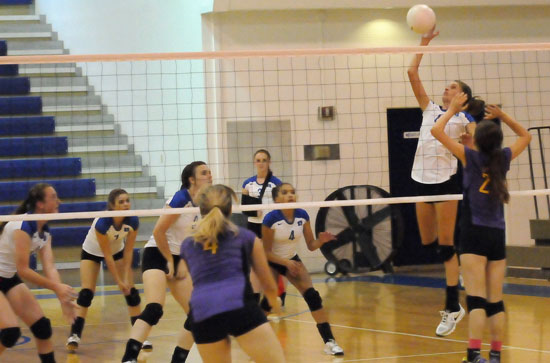 As always, winning was the ultimate goal but it wasn’t the only measure of success for Bryant Lady Hornets volleyball coach Beth Solomon when her team hosted the Fountain Lake Lady Cobras Thursday night. With three losses in their last four matches in South Conference play including a particularly disappointing loss at home to rival Benton earlier this week, the Lady Hornets’ preparation for the Lady Cobras included more than the usual practice. 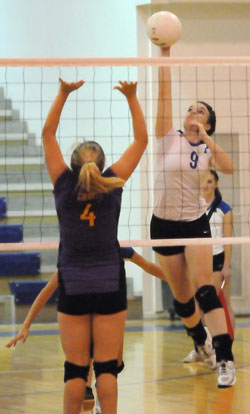 “After the loss to Benton Tuesday night we had some things to work out that didn’t necessarily have to do with our on-the-court play,” related Solomon. “We had individual and team meetings with the girls and decided it was time to start playing together on the court. The girls did that tonight.

“The girls did a great job,” she stated. “We may have lost in three but this was by far the best we’ve played all year. Fountain Lake is always a good team and has strong hitters. They are very scrappy on the court. Our girls played neck and neck with them all night.”

“Our back row really stepped it up tonight,” Solomon asserted. “They moved their feet very well and had the ball going to a perfect position almost every time. We put in Kaci Squires and Savannah Shelton to help in back row and they really stepped it up. Whitney Brown had the game of her life. She refused to let a ball hit the floor and made some great saves.”

Brown had seven digs to lead the Lady Hornets. Shelton and Squires had three each.

On the service line, Kendall Selig provided four of the team’s aces with 15 good serves in as many attempts. Britney Sahlmann was 10 for 10 and Abby Staton got in eight of nine. Sahlmann also had 22 assists, a block and a kill.

The Lady Hornets return to the court on Tuesday, Oct. 8, at Little Rock J.A. Fair in a South Conference match.

Whitney Brown makes a pass as Madison Greeno (1) and Britney Sahlmann (8) get in position to respond. (Photo by Kevin Nagle)