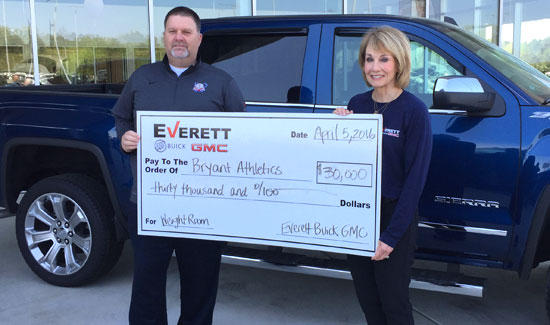 The donation is similar to one given to the Benton Athletic Department in the recent past.

“The generosity is impeccable,” said James. “I think that what we’ve been able to do already with the facilities that we have, this will do nothing but enhance our physical abilities to play in all sports. I think we’ve got to be able to train a lot of kids with the growth of our school and the growth of our athletic programs.

“It is imperative that we get as many kids as we can in the weight room that gives them a chance to grow,” he added. “That’s what this is going to do. We’ll be able to workout 100 kids at a time where we’ve been able to do about 50 or 60 kids at one time. So it’s almost going to double what we’ve been able to do. The space will be better utilized and we’ll be able to have more kids working at a higher level for a longer period of time.”

“It’s been a big hurdle from the standpoint of getting them in there (50 or 60 at a time) and having some consistency,” James said. “The kids have been on a three-day-a-week workout because you have to have another group come in there on the opposite day. This will allow kids to be able to get in four days a week. We’ll be able to get more kids lifting at one time, which will help our program tremendously.”

Specifically, the coach related, “We’re basically buying racks, buying weights, stuff to lift. The room is going to stay the same. We’re just adding equipment. We’ll go from 12 racks to 25 racks and we’re going to add about 4,000 pounds. It’s very much needed. Right now, when we lift, we lift everything that’s in the room. We don’t have enough weight to lift if everybody’s in there.

“It’s expensive but it’s a one-time investment,” he acknowledged. “You buy it and you can use it forever. The equipment that’s in there right now has probably been there 20 years or more. This will be an investment that will last for many generations of Bryant athletes.”

James said it is hoped that everything will be installed by summer.