CONWAY — It should’ve been 0-0 going into the bottom of the seventh.

But there was no bottom of the seventh. Conway managed four unearned runs on seven Bryant errors including five in a three-run, hitless first inning and won the game 4-0.

It was the first Class 7A game for Bryant in the 7A/6A-Central Conference. Conway moved to 2-0 against 7A league rivals and 5-0 overall in the league with the victory.

In a season in which just six games determine who goes to State and where they’re seeded, it was a crucial contest.

It was just the second loss of the season for Bryant in 15 games. The only other loss was to Maple Grove, Minn., during their trip to Tampa, Fla., on spring break

“It was the exact same thing, basically,” stated Bryant head coach Kirk Bock. “The two losses we’ve had — the four runs they scored in Florida were unearned. All four of those (tonight) were unearned.

“I thought Zach threw well,” he continued. “We just didn’t make the plays behind him. We threw it well enough to continue to compete. We didn’t play defense well enough and we didn’t swing it well enough.

The Hornets had base-runners in every inning but never more than one. And nobody got past second. Cahill, who has signed with Arkansas State, worked around a two-out single to Evan Lee in the first and a one-out double by Jake East in the second. In the third, Aaron Orender had a bad-hop single at short to lead off but was stranded after moving to second on Logan Allen’s grounder to first.

To open the fourth, the Conway lefty issued his only walk to Garrett Misenheimer. He got to second on East’s hit-and-run groundout to the second baseman. Moments later, Cahill struck out Austin Kelly on a pitch in the dirt. Kelly took off for first as Conway catcher Grayson Pinkett recovered the ball and threw to first. There was confusion when the homeplate umpire gave a safe sign but he was referring to the fact that the Kelly wasn’t out on the swing. The field umpire ruled Kelly out, a call that stood after Bock came out to get an explanation.

The Hornets’ frustrations continued in the bottom of the fifth when Seth Tucker beat out an infield single and Orender sacrificed him to second only to have Cahill fan the next two to get out of the inning.

He worked around a two-out error in the sixth then gave up a two-out single to Orender in the seventh before closing it out on a grounder to third that went for a force.

In the nightmare, home first, Conway’s lead-off batter Parker Gavazzi reached on a grounder to first that Orender ranged to field. There was confusion on whether Jackson or Tucker, the second baseman, was going to cover the bag and Orender’s throw was dropped.

Jackson came back to get Pinkett on a force at second but another error on a grounder to first allowed Kolby Reck to reach. The same for Cade Tucker who smoked a one-hopper at Orender who knocked the ball down with his chest but couldn’t recover in time to get the out as the first run scored.

Jordan Wicks grounded into a force at second on a nice play by Seth Tucker. With runners at first and third and two out, Jackson and the Hornets appeared to be out of the inning with just one run in when the right-hander got Matt Lloyd to tap one between home and the mound. Jackson fielded the ball but his lob to first went over Orender’s head for an error. Reck scored to make it 2-0.

And when Jackson tried a fake-to-third, throw-to-first pick-off, his throw was in the dirt and got away. Wicks scored the third run of the inning.

McCall Dail struck out to finally bring the inning to a close. Conway had three runs despite not getting the ball out of the infield.

Pinkett led off the fifth with a double but was stranded at third. A splendid block on a pitch in the dirt by catcher Dylan Hurt saved the run. Then East made a sparkling play in the hole at short to nip Wicks at first to end the inning.

Lloyd doubled to open the sixth and Dail sacrificed him to third. He scored when East charged in and made a nice play on a chopper off the bat of Andrew Hreha. He checked to make sure Lloyd held at third but his throw to first was in the dirt and got away resulting in the Wampus Cats’ fourth unearned run.

“The good thing about it is, they didn’t score 5,” noted Bock. “So now we’ve got to beat them by 5 at our place to get the tiebreaker on them.”

That will be on April 29. The league gets just one bye for the State Tournament. Winning the league is required to get placed just two wins away from the finals instead of three.

The Hornets will be at home this Friday for a conference doubleheader against Class 6A Alma. 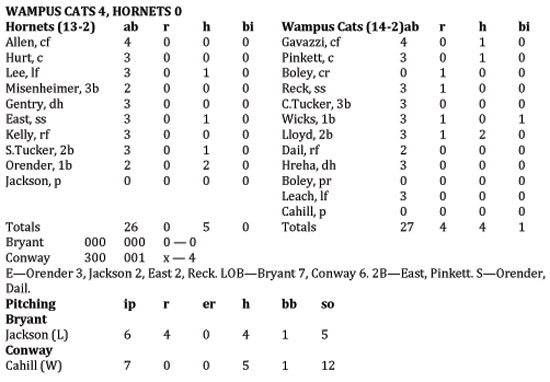