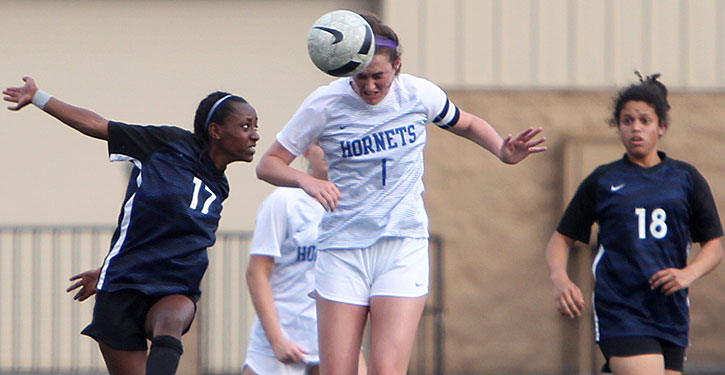 CONWAY — With a chance to gain a share of the 6A-Central Conference championship, the Bryant Lady Hornets were denied as the Conway Lady Cats finished unbeaten to earn the title with a 3-2 win over Bryant on Monday night.

The Lady Hornets finished 12-2 in the league with both losses coming narrowly at the hands of Conway. Their match at Bryant earlier in the year went to a shootout after they battled to a 1-1 tie in regulation.

So, the Lady Cats will be the top seed for the 6A State Tournament, which they will host starting this Thursday.

Bryant will be a two seed. Both teams will have first-round byes. The Lady Hornets will open play on Friday at 4 p.m., against the winner of the Thursday game between five seed from the 6A-West Conference, Springdale Har-Ber and either Cabot or North Little Rock.

Kailyn Pavatt had a hat trick for the Lady Cats. She scored that first goal at the 32:09 mark of the first half. Her second game at 14:46 and it was 2-0 at the intermission.

Less than nine minutes into the second half, Mary Catherine Selig scored off an assist from Abbey Inman on a corner kick.

Pavatt made it 3-1 with 15:15 left and it wasn’t until the final minute that Alyssa Fason added Bryant’s second goal off a penalty kick.