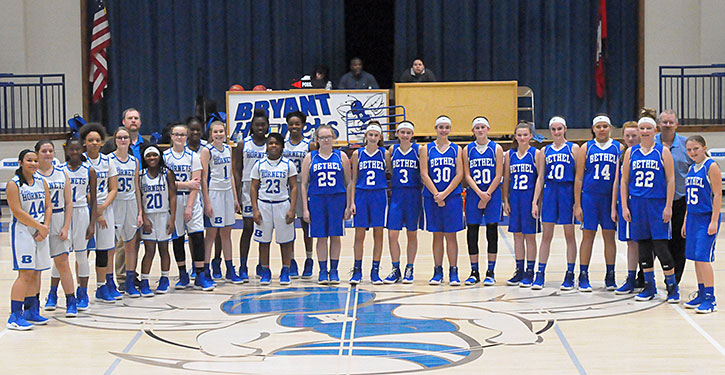 The game-winning bucket capped off a 13-2 come-from-behind run for Blue, which trailed by 9 going into the fourth quarter.

“We kind of sputtered around the first three quarters but really turned it on the fourth quarter and grabbed the victory,” said Blue coach Joe Cook. “Emileigh Muse and Abby Gentry did a great job battling all night and Emily Miller came off the bench and gave us some real quality minutes.”

“It was the last eighth-grade Bethel versus Bryant game,” noted White coach Ben Perry. “It did not end the way we wanted but I was proud of the effort and play that the girls gave.

“We did not execute or close the game like we should have,” he added. “We missed too many open layups and open shots. We are still struggling with our layups and our free throws.

“We played hard and I believe out-played them for three and a half quarters,” Perry said. “Mental breakdowns, which caused a swing in the game, along with not understanding basketball situations on the court hurt us.”

In the third quarter, Bryant White put together a 12-2 surge to produce that 9-point lead.

“We came out in the third quarter very aggressive and pressured the ball and were able to make a couple layups real quick,” Perry said.

Two free throws and a 3-pointer fueled Bryant Blue’s rally, cutting the lead to 4 in the first 10 seconds of the fourth quarter.

“We maintained a lead with about 1:34 left,” Perry related. “I instructed the girls to work the ball around and look for a good layup or open shot. I told them to be patient and that we did not need to rush. However, on back to back possessions, youth must have gotten the better of them and the point guard drove the lane immediately through traffic and lost the ball.”

White still led by 2 inside the final minute.

“We threw the ball away for a layup which tied it,” said Perry. “We were tied with less than 30 seconds left and instead of taking care of the ball or looking for an open shot or layup we got the ball stolen and Edmonson worked the ball down the court and was able to dribble around her defender for a layup.”

“The girls learn lessons every game and they improve every outing,” concluded Perry. “I’m proud of every single one of them. We will nurse our bruises both physically and mentally and gear up for North Little Rock next week.”