If, by chance, there was any doubt about the depth of the Bryant Hornets’ pitching staff, the team’s pre-season game against the rival Benton Panthers provided plenty of reassurance.

Though Benton managed four hits and scored four runs (with the help of Bryant’s only error of the game) in the seventh, the Hornets held on for a 5-4 win.

And the Hornets flashed some leather. Wells and back-up Danny Riemenschneider both made splendid plays at shortstop.

All in all, a quality debut.

All-State lefty Travis Wood pitched the first two innings and struck out four of the six batters he faced. All-State right-hander Wells worked a 1-2-3 third with the help of Riemenschneider’s play. Lambert, an all-conference performer at Little Rock Central last season, eased through the fourth. In the fifth, lefty Casey Grisham needed just seven pitches to retire the side, thanks in part to Wells’ splendid play. In the sixth, right-hander Todd Bryan, who recently signed with Allen County (Kansas) Community College, struck out the side around a one-out walk.

Junior right-hander Aaron Davidson worked the seventh and surrendered three singles and a walk around a strikeout, which produced Benton’s first run. With two out, a single up the middle that was misplayed cleared the bases and made it 5-4. But Davidson bowed up and struck out the next batter to end the game with the tying run at third.

Benton also used a pitcher an inning. Bryant scored its first run in the second when Young singled with one out and Lambert pulled a two-out single to right. After Davidson walked, Bryan drew a free pass to force in the run.

In the third, Travis Wood belted a one-out bomb to left to make it 2-0. His cousin Richie followed with his triple to the corner in right. He scored on a groundout by Young to make it 3-0.

In the fourth, Davidson reached on an error. Courtesy runner Joey Winiecki swiped second and took third on a wild pitch. An out later, Bryan Griffith brought him home with a sacrifice fly to center.

The fifth run scored in the fifth. Travis Wood singled and stole second then hustled home all the way from second on Young’s infield hit to deep short. 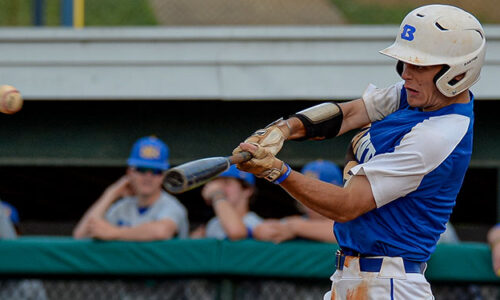