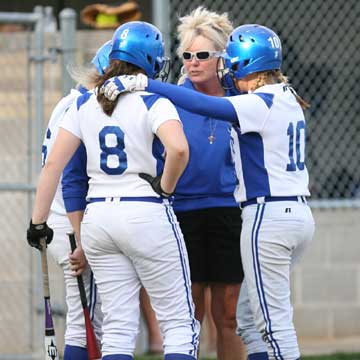 VAN BUREN — For the eighth time in 14 games, the Bryant Lady Hornets softball team scored in double figures with their 11-5 win over the Van Buren Lady Pointers on Friday, April 9. A five-run seventh broke open a 6-5 game as Bryant improved to 14-0 overall and 6-0 in the 7A-Central Conference.

The Lady Hornets will are entering perhaps their most challenging week of the season when, after traveling to Greenbrier on Monday for a non-conference contest, they host third-place Cabot (11-6, 3-1) on Tuesday then visit defending Class 7A State champion North Little Rock (18-2, 5-0) for a first-place showdown on Thursday, April 15. 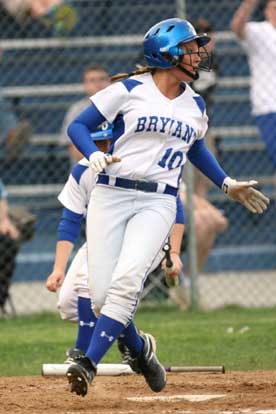 Bryant grabbed the lead in the top of the first. Bruick beat out an infield hit, advanced on a groundout to the mound by Cassidy Wilson then scored on a single by Jenkins. And when the throw to the plate was off-target, Jenkins went to second which made it possible for her to score on Sory’s first hit.

Jenkins, the Lady Hornets’ pitcher, surrendered a lead-off double to Keri Arnold to start the bottom of the inning but retired the next three with Arnold never getting any further.

Jenkins would go on to allow just four hits in the game. She struck out six, walked two and hit one. Four of Van Buren’s five runs were unearned as the Lady Hornets struggled defensively as well.

The first two Bryant errors occurred in the bottom of the second but Jenkins worked out of the jam, stranding runners at second and third.

The Lady Hornets added to their lead in the top of the third. Wilson led off with a grounder to short but reached when the throw to first was dropped. Jesse Taylor cracked a double to right center and when Wilson scored on an errant throw, Taylor took third.

Jenkins drew a walk and when Sory’s infield pop was dropped, Taylor scored to make it 4-0. Shanika Johnson followed with a drive off the fence in left-center that chased in Jenkins. Sory reached third but Van Buren got off the hook by retiring the next two batters, keeping the deficit at 5-0.

Jenkins pitched around another error in the third and the Lady Hornets threatened in the fourth. Kelsie Works drew a walk to lead off the inning. Bruick singled to left and when the return throw to the infield got away, they advanced to second and third. With one out, Taylor lifted a fly to left. Works tagged and appeared to score but it was ruled on appeal that she left third too soon resulting in an inning-ending out. 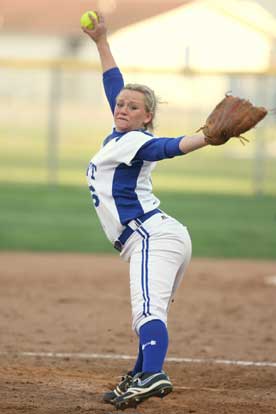 Van Buren got back into the game in the bottom of the inning. Lauren Bryant picked up the Lady Pointers’ second hit with a double to left-center. An error allowed Monica Smith to reach as the first run scored. Dayton Lunsford singled then a run scored on a tap to first by Lauren Tipton for the first out. When Katelyn White hit one back to Jenkins, Lunsford was caught off third and thrown out. Arnold’s drive to left was misplayed, however, and White scored to make it 5-3.

With the potential tying run at the plate, however, Jenkins got Logan Brown to fly to Works in center to end the inning.

Bryant got a run back in the top of the fifth and Jenkins sparked the inning with her second hit. Sory doubled her to third and Johnson delivered a sacrifice fly to get her home.

Jenkins worked around a hit batsman in the bottom of the fifth but, in the bottom of the sixth, the game tightened. Lunsford drew a lead-off walk and, after Tipton struck out, White walked as well. Arnold singled to make it 6-4 but Jenkins got Brown to hit a roller to third. White tried to get to third on the play but Johnson threw to Wilson, the Bryant shortstop covering third for the out.

Arnold reached second on the play then scored when Kathryn Goins reached on an error.

With the potential tying run at first, Jenkins struck out clean-up hitter Kelcie Atwell to preserve the Lady Hornets’ lead.

And Bryant responded with the game-clinching uprising in the seventh which started with a walk to Taylor. With one out, Sory singled to left and, when the ball was booted, Taylor scored. Sory wound up at second. Johnson followed with a grounder to short. Sory took off for third and drew a wild throw that went into the dugout allowing her to score.

Johnson, who wound up at third, scored moments later when pinch-hitter Courtney Davidson’s fly to left was misplayed.

The inning continued with a walk to Ashley Chaloner and, with two down, back-to-back hits by Bruick and Wilson both drove in runs to set the final score.

The wind taken out of their hopes, the Lady Pointers went down in order in the bottom of the seventh.