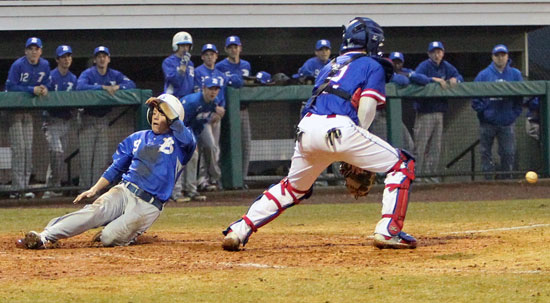 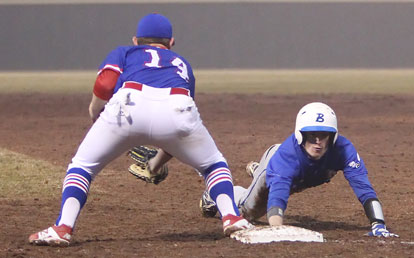 Seth Tucker slides back into first on a pick-off attempt. (Photo by Rick Nation)

With fog getting thicker and thicker, the Bryant Hornets came up in the bottom of the fourth inning of a 4-4 game against the Arkadelphia Badgers. Jason Hastings lofted a fly down the right field line on a 1-2 pitch from Dylan Parnham. Badgers’ first baseman Brandon Matros pointed up at the ball for right-fielder Braydon Bebee. But Bebee never saw it until it hit the ground. Hastings, hustling all the way got to third for a triple.

The coaches and umpires got together to talk about the conditions and agreed to play on. Evan Lee slapped a single to left and Hastings came home with the go-ahead run. Parnham and Blake Patterson battled to a 2-2 count then the Bryant first-baseman ripped a drive to right-center. 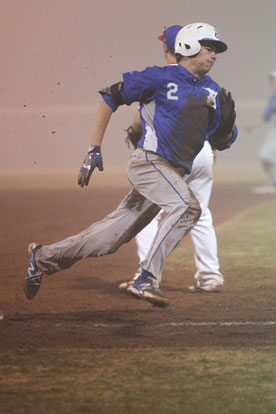 While it’s not certain that centerfielder Cameron Breashears would’ve reached it had it saw it, he just never saw it until it hit the ground. Patterson wound up at third, Lee scored to make it 6-4 and another conference between the umpires and the coaches resulted in the game being called.

Blaine Knight pitched for the Hornets, giving up an unearned run in the second and three in the third. But he found his group to work a 1-2-3 top of the fourth. He fanned five and walked two in his four-inning stint.

Hastings and Lee each had two hits. They were on base all three times they came to the plate. So was Patterson with two walks and his triple.

The Hornets grabbed a 3-0 lead in the bottom of the first when Hastings beat out an infield hit on a grounder up the middle that ricocheted off the mound and was stabbed by second baseman Clay Wilson with a dive. His throw to first wasn’t in time.

A pair of wild pitches by Badgers’ starter Dylan Weems allowed Hastings to reach third as Lee was drawing a walk. He stole second then Patterson walked. With Brandan Warner at the plate, Weems uncorked another wild pitch allowing Hastings to score.

With two out and runners at second and third, Garrett Misenheimer lofted a flyball into the “Bermuda triangle” behind second base that no one could get to. Shortstop Cutter Jester tried to stab it with an off-balance lunge but couldn’t get it. Both runs scored and Misenheimer hustled into second with a double.

Arkadelphia’s run in the top of the second was knocked in by Breashears after two were out. Danny Spradlin singled to open the inning but after Knight fanned T. Brooks Burnham, Bebee bounced into a force at second with Connor Tatum making a nice play to get the lead runner. 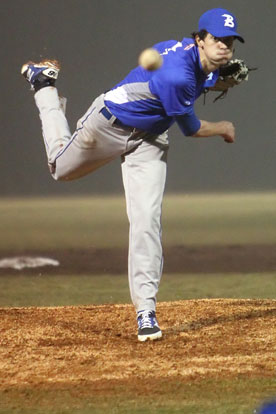 An errant pickoff throw allowed Bebee to get to second and, after Matros walked, Breashears doubled off the fence in left to make it 3-1.

Ty Jones flew out to Lee in left and Bryant came to bat. The Hornets loaded the bases with two out when Hastings and Patterson walked on either side of Lee’s single. But Weems was able to get Warner to pop to first to escape.

Knight fanned Jester to open the third but, on a 3-2 pitch, issued a walk to Wilson. Ty Kosters singled inside the line in right and Spradlin cracked a hit up the middle to load the bases for Burnham. He plugged the gap in right-center for a two-run double that tied the game at 3. Bebee gave the Badgers the lead with a bouncer to short that got Eric Groom home after he had come in as a courtesy runner for Spradlin, the Arkadelphia catcher.

Matros popped to Tatum down the right field line and the Hornets went back to work on offense. Trey Breeding led off with a shot to left-center for a double. Logan Allen came on as a courtesy runner for the catcher, stole second and scored when the throw to third was errant.

Knight eased through the top of the fourth as the fog began to build, leading to the final three at-bats in the home half.

The Hornets are scheduled to play White Hall on Friday, weather permitting. 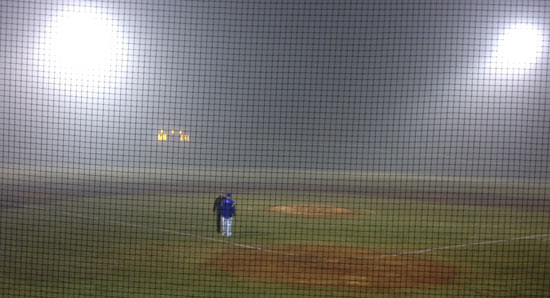