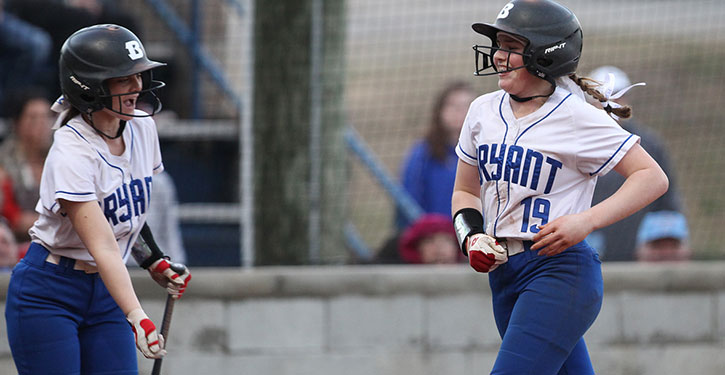 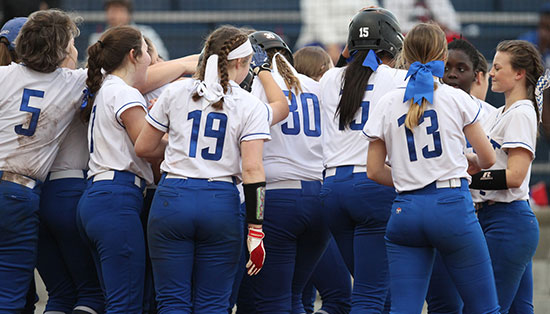 Brooklyn Trammell is greeted at the plate after her home run. (Photo by Rick Nation)

Senior Brooklyn Trammell and freshman Bella Herring each slugged two-run homers in the bottom of the fourth inning as the Bryant Lady Hornets broke open a 3-1 game against Lake Hamilton Lady Wolves on Thursday. With Gianni Hulett and Raven Loveless combining on a one-hitter, the Lady Hornets earned an 11-1 win in six innings in their official season opener at Lady Hornets Field.

Loveless also had two hits for Bryant including an RBI double in the first and a lead-off single in the fourth that preceded Trammell’s blast to right-center. 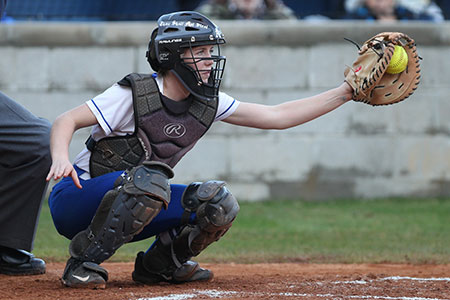 The Lady Hornets also benefited from six errors by the Lady Wolves.

Hulett started and alternated with Loveless. Over four innings, the first and second along with the fifth and sixth, the sophomore southpaw, struck out nine without allowing a base-runner. She struck out the side in the second and the sixth.

Bryant grabbed a 2-0 lead in the first when Hulett ripped a triple to right-center and scored when Meagan Chism’s fly to right was misplayed. Chism wound up at second and, with two outs, scored on Loveless’ double.

In the third, Loveless came in to pitch and struck out two during a 1-2-3 frame. In the bottom of the inning, Regan Ryan led off with a single inside the bag at third. She stole second and, when the throw from catcher Jessye Rowland was errant, she took third. Hulett provided a sacrifice fly to make it 3-0. 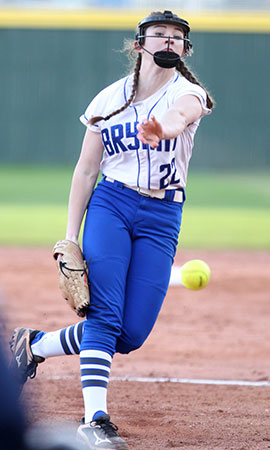 An error allowed the Lady Wolves to get their first base-runner as Charlye Rowland reached base. She advanced to second on a sacrifice bunt by Madison Hardcastle then went to third on a single up the middle struck by Annalee Diehl. A wild pitch allowed Rowland to score.

With Taylor Humphreys in to run for Diehl, Jessye Rowland hit a roller to Trammell at first. She got the out at first then, with Humphreys trying to sneak home from second, Trammell threw to Chism at the plate in time for an inning ending doubleplay.

That was the last base-runner of the game for Lake Hamilton.

Bryant’s fourth opened with Loveless’ single and Trammell’s blast. Freshman Alissa Suarez followed with a double to right-center before Herring unloaded to center.

The Lady Hornets tacked on another run in the inning when Ryan walked and, with two down, Chism whacked a shot to right-center for a triple to make it 8-1.

In the fifth, Loveless drew a lead-off walk and when Trammell hit a grounder to third that resulted in a wild throw down the right-field line, she scored all the way from first. Trammell, who got to second on the play, took third on a sacrifice by Herring. She scored on an errant pick-off throw to make it 10-1.

In the home sixth, the Lady Hornets loaded the bases. Hulett and Chism each reached on errors. Sarah Evans hit a grounder to Kamryn Knox at second. She looked to first in hopes of getting a force on Chism but the shortstop was late covering the bag. When she turned to look at first, Evans was hustling past the bag to load them up.

That brought up Loveless who earned an RBI walk to end the game.

The Lady Hornets are scheduled to return to action on Monday as they host Bald Knob. On Tuesday, they open 7A-Central Conference play against arch-rival North Little Rock, the defending State champion, which knocked Bryant out of the playoffs last season.