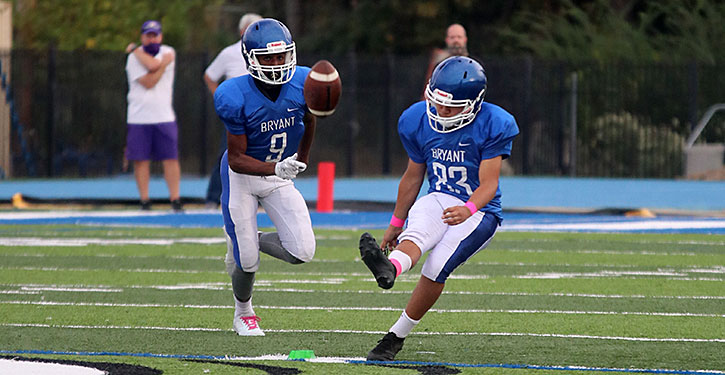 The Bryant Hornets freshman team can complete a second consecutive undefeated season tonight with a win over the Benton Panthers freshman team at Hornet Stadium.

The Hornets have already clinched the championship of the Central Arkansas Junior High Conference. A win would run a winning streak to 20. The last team to defeat a Bryant freshman team was Benton at the end of the 2018 season.

In addition, a win would even the all-time series between the two since 1986. Currently, Benton holds a 19-18-1 advantage.

This season, Bryant has averaged out-scoring its opponents 40-5, allowing 887 yards of total offense while gaining 1,882 yards.

Last week, the Hornets defeated Conway White 41-9 while Benton beat Cabot South 12-7, enabling Bryant to wrap up the league title. The Panthers improved to 4-2 in the league and 5-4 overall.

It is the sixth conference championship in the last seven years for Bryant.

Prior to the freshman game at 7 p.m., the Bryant White Hornets eighth grade team will challenge the undefeated Benton eighth graders at 5:30.

That will wrap up the season for both teams as will the Bryant Blue Hornets eighth grade’s contest tonight at North Little Rock.