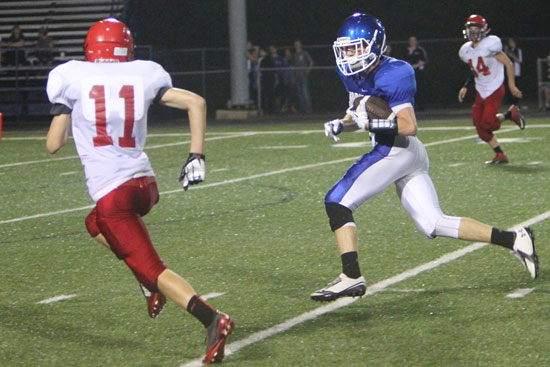 Anybody that knows what kind of football is played in Cabot should know — or, at least, suspect — the outcome of Thursday night’s season-opening game between the Cabot South Panthers and the Bryant Hornets freshman team after hearing one statistic: 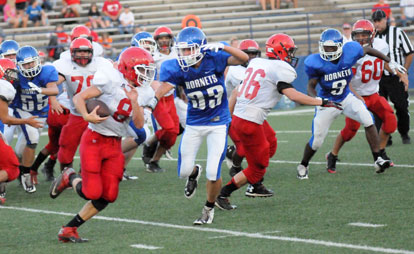 With a little luck thrown in, the Hornets rallied for a 12-7 win in a non-conference game between two Central Arkansas Junior High Conference rivals. Neither of the teams could find a week-one opponent to schedule, so they agreed to play each other in addition to the league battle in Cabot, which will be played Thursday, Oct. 23.

Cabot South managed 102 yards of offense in the first half, including 80 on the ground. The Panthers scored the lone touchdown of the half with :29.9 left on a 2-yard run by quarterback Cody Skinner. Ty Cyr kicked the extra point. 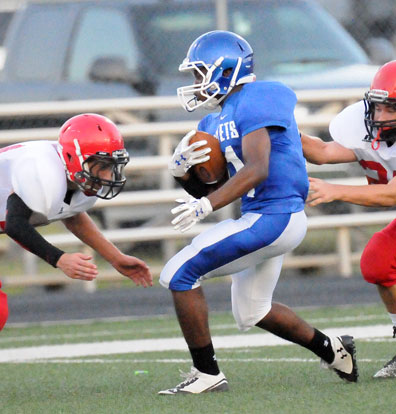 In the second half, however, the Bryant defense limited the Panthers to just 16 yards rushing as they shut the visitors out.

And, oh, yes, the lucky part. Leading 12-7 with time running out, the Hornets decided to punt on a fourth-and-7 at the Cabot 43. There was less than 2:30 left in the contest when the Panthers’ Adam Flores fielded the punt by Bryant’s Grayson Prince at the 10. Flores proceeded to break the return 90 yards for a go-ahead touchdown. But much of the return was negated by a penalty for an illegal block in the back.

With 2:15 left, the Panthers took possession at their own 45. They still made a bid to win it as Cyr, at quarterback, completed a 19-yard pass to Marc Magwood. Cameron Vail and Johnny Wallace saved a touchdown by driving Magwood out of bounds. 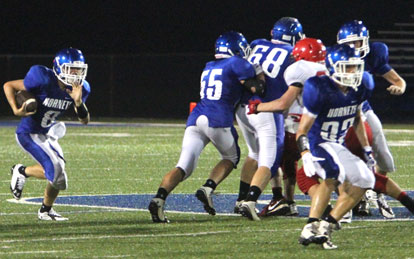 But the Bryant defense stood up at that point. Hoping to surprise the Hornets, a quick handoff to Jordan Clark was stopped cold by Nick Smith. Cyr tried to roll out to pass again only to have Wallace get to him and hit his arm as he threw. The ball fell incomplete.

Hoping to spring the shifty Magwood, Cyr hit him with a short pass only to have the Hornets sniff it out and stop it after a 4-yard gain. That brought up fourth down and, after Cabot South took a timeout with 1:04 remaining, Cyr’s final pass was incomplete sealing the Bryant win.

“I haven’t got a lot to say,” stated Hornets head coach Kenny Horn. “We didn’t play very well. All I can say is, we won. We played better in the second half.”

Asked if he and his assistants, John Orr, Kirk Bock and Travis Queck changed anything at the half, Horn said no.

“We just had a little heart to heart talk,” he related. “We had better effort in the second half.” 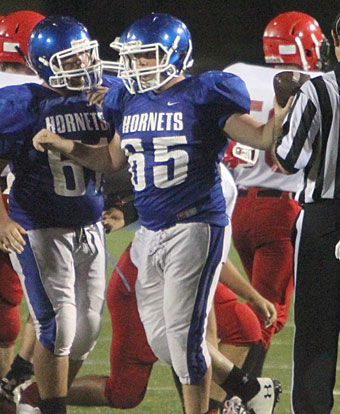 Hunter Howard (65) hands the ball to the referee after recovering a Cabot South fumble. (Photo by Rick Nation)

The Hornets went three-and-out on their first two possessions of the game. The Panthers did as well. As the second quarter rolled around, Cabot South drove from its own 42 to the Bryant 27. Sparked by some tough tackling by cornerback Jakalon Pittman, the Hornets made a stand. On first down, Pittman stopped the much-bigger Austin Swackhammer for no gain. Cyr followed with a pair of incomplete passes, setting up a fourth-and-10 at the 27.

As is their habit, the Panthers went for it, turning to some trickery. And the reverse to tight end Dayonte Roberts looked like it might work but Pittman came up again and grounded Roberts, who also had him outsized.

Bryant took over at its own 20 and picked up its initial first down after a 5-yard run by Diante Woodson and a 4-yard pass from Jones to Brooks Ellis. But Jones was dropped for a loss on first down from the 34 and, though he broke a 12-yard run, the Hornets couldn’t make up the difference. A fourth-and-2 sneak from the Hornets 42 came up short and with 3:08 in the half, Cabot South took over with a short field.

Runs by Skinner, Sebastian Stinnett and Swackhammer of 10 yards or more set up Skinner’s touchdown in the final seconds of the half.

Bryant got the ball to start the second half and avoided a turnover on the kickoff when Luke Curtis pounced on a loose ball.

Woodson slashed for 8 yards and, a play later, Jones completed a 15-yard pass to Pittman to convert a third-down that had been complicated by a penalty moments before.

Still, the drive stalled after reaching the Bryant 44. Prince punted it away and Cabot South gained possession at its own 37.

The Panthers appeared to pick up where they left off. A pair of runs set up a third-and-2 at the 45, the kind of situation Cabot teams relish. But Pittman and Johnny Smith came up to drop Stinnett for not gain and, on a fourth down, Wallace wrestled down Cyr for a loss and the Hornets had the ball back.

From the Cabot 41, Jones fired a deep pass down the left seam that Vail snagged, making a fingertip catch on the run. He sprinted into the end zone for the Hornets’ first touchdown with 3:02 left in the third quarter. An extra point kick was low and blocked.

Cabot South made a bid to answer and extend its 7-6 lead, picking up a pair of first downs, one on a 27-yard pass from Skinner to Magwood. Two plays later, on a third-and-5 at the Bryant 39, a mishandled handoff resulted in a fumble that Bryant’s Hunter Howard claimed with 7:21 left to play.

Enter Fuller, who dashed for 8 yards on two carries. The Hornets picked up a first down by getting Cabot South to jump in the neutral zone with their snap count. On the next play, Jones fired a pass to Pittman who turned it into a 23-yard gain.

From the 28, Fuller got the call and skirted left end, down the sideline and into the end zone for the go-ahead score.

Fuller tried to add a run for the two-point conversion but the Panthers stopped him at the lip of the goal to keep it 12-7.

They would get two chances to regain the lead. The first was foiled by defensive plays from James McClendon, Nick Smith and James Polite. The first two was tackles for losses, the third was an interception on a fourth-down reverse pass by Magwood that failed to fool the Hornets’ defensive back.

That came with 4:53 left. The Hornets used up about half of that before punting the ball away resulting in the return for the touchdown that was called back.

Fuller wound up being Bryant’s leading rusher with 36 yards on three carries. Jones, after completing just 1 of 4 passes in the first half, hit 3 of 5 in the second for 79 yards and the score.

The Hornets get another dose of Cabot football next week when they host Cabot North.