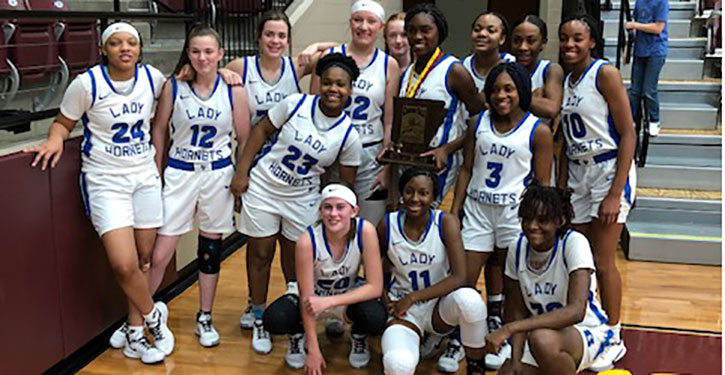 PEARCY — The Bryant Lady Hornets freshman team captured the championship of the 2020 Kameron Hale Invitational Tournament with a 31-18 win over the host Lake Hamilton Lady Wolves on Saturday.

Bryant used a 10-2 run through the second quarter to take control of the game after leading 7-4 through the first period. It was 21-12 going into the fourth quarter.

It was the Lady Hornets’ 10th consecutive win after opening the season with a 33-31 loss to Vilonia.

“I was very proud of how our girls responded to some adversity tonight,” said Bryant head coach Nathan Castaldi. “We talked about how tonight would not be as easy as the first time we played them, and it was not. Our girls responded to the challenge and I think that is a good sign for the rest of the season. These last couple of games were really good for us heading into a tough week on our schedule.”

Lauren Lain led the team in scoring against Lake Hamilton with 10 points. Natalie Edmonson had 6, Jaelyn Allen 5, Haya Winfield and Lyniyae Johnson 4 each and Emileigh Muse 2.

Winfield was named player of the game.

“Lake Hamilton played a similar style to what we saw yesterday with Mena,” Castaldi said. “They were real aggressive on defense, trying to take us out of our rhythm and, when they were on offense, they tried to play slow and keep the ball away from us. Other than a short stretch during the third quarter, I thought our girls did a great job of countering what they were trying to do.

“We got a little sloppy with the ball during that part, which allowed Lake Hamilton to stay in the game, but we turned it around the fourth quarter to pull away,” he noted.

“Natalie started the game out by hitting a couple of 3’s which gave us some momentum early,” added the coach. “Emileigh, Lyniyae and Jaelyn did a good job of handling the pressure and got us into our offense. Our posts, Haya and Lauren, had an advantage inside and were able to take advantage of it for most of the game.”