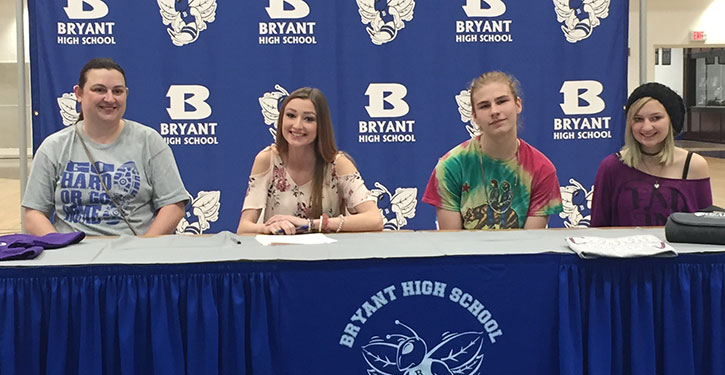 Goins to continue education, plans and running career at Ozarks

She’s not unlike most high school seniors that way. It’s a time for dreams and hopes that turn into plans and processes that involve strategies and hard work.

Sounds kind of like running cross country as a matter of fact. So Katherine Goins should be ready for it.

“I started running in seventh grade and I wasn’t really expecting to love it as much as I did,” said Goins, a two-time all-conference performer for the Bryant Lady Hornets. “I was just kind of ‘Oh, everyone is trying out for a sport. I’m going to go try out for a sport too.’ I made it and, after my first year, I just fell in love with it.”

Though hampered by nagging injuries her senior year, Goins drew enough attention to gain some college interest. While diligently gathering academic and public service scholarships, she started thinking about going somewhere that she could start those plans and processes while continuing to do something she enjoyed and continuing to compete.

On Friday, May 5, that officially became a reality for her. In a signing ceremony at the Bryant High School gym, Goins, the daughter of Michelle and C.J. Mott committed to attend the University of the Ozarks in Clarksville.

“She’ll go out and give everything she has,” said Lady Hornets coach Keith Dale. “She has the potential to really grow and be a good runner. She’s still kind of green. With good health and hard work, she can step it up and I think she’ll do just fine.”

“I was looking into going to UCA,” Goins recounted. “Then the UCA coach referred me to the University of the Ozarks. I was kind of iffy about it but I met the coach and he was really welcoming. He really wanted me to go.

“I know Kaitlyn Bell went there and she really wanted me to go,” she noted, referring to a former Lady Hornets teammate. “Just seeing how well the girls do there and how much they’ve improved since high school, that made me really want to go there. Also, they’re Division III and I feel like, a smaller team, I’ll get more one-on-one with the coach and that’ll help me improve.”

Regarding her official visit, Goins said, “It’s a pretty campus. I love it. It’s actually one of the smaller schools I’ve looked at for college. I’ve heard that everybody knows everybody there. I like that.”

It’s not everybody that enjoys long-distance running.

“I like the thrill,” Goins explained. “And I like when we win, obviously. It just gives me a rush, kind of a runner’s high when I’m running. When I finish, I’m just so proud of myself that I just ran a 5K. Not everyone can do that.”

As for those dreams and hopes, Goins will thinking pre-Med.