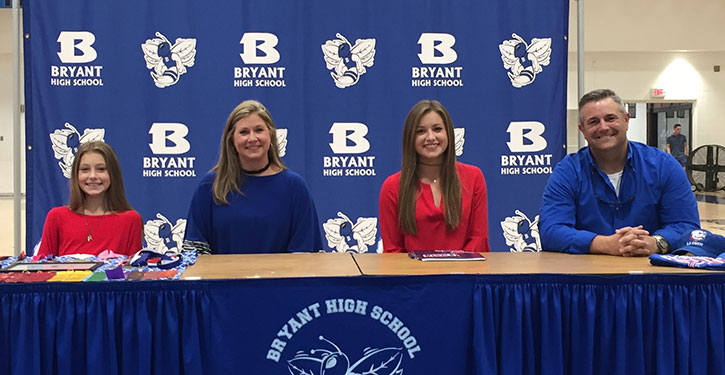 Brianna (Bree) Hood has decided on a college and her career goals.

“Kind of, maybe a little bit influenced by TV,” she allowed.

“But I’ve been doing an FBI program and it’s been really cool,” she added. “It’s been a great experience and it’s helped my decision a lot. My mom was a chemistry major and my dad works at the FDIC so he’s got the Federal Government side. So, I’ve had her background and his as well and I love science. So that’s where I’m headed hopefully.”

You’d expect something like that to be well thought out from a high school senior who maintains a 4.14 grade-point average — that’s better than an A average, by the way — a member of the National Honor Society and the Bryant High School Student Senate. She will graduate with honors.

That probably had something to do with the ceremony for Hood held at the BHS gym on Friday, May 5. But it also had a lot to do with the fact that she has been all-conference in track and cross country and has competed in the annual Arkansas high school heptathlon.

In that ceremony, Hood, the daughter of Joey and Christie Hood, signed an NCAA Division I National Letter of Intent to continue her education towards those goals and her track and cross country career under scholarship at Louisiana Tech University in Ruston, La.

“I was on the border about where I wanted to go,” Bree Hood said. “I had a bunch of D-2 schools that were recruiting me and I had a couple of schools that wanted me to walk on that were also D-I. But when I went to Louisiana Tech, it just felt like home. It was home. I met with the coach Gary Stanley and he was amazing. I couldn’t have asked for a better visit. I met a couple of the teammates. It was just fun. It was a really fun trip and it just felt like that was where I needed to be.”

She visited other schools, she acknowledged including Mississippi College and Ole Miss.

Like Bree, Haley was a star in track and cross country at Bryant High School before signing with Ole Miss.

“I started running in sixth or seventh grade,” Bree related. “I started track in the seventh grade and I’ve run ever since then and I’ve loved it. I started running more distance on my own. I ran a bunch of 5K’s just for fun. After I quit cheer after my sophomore year, coach was like, ‘Hey, why don’t you try this. You run for fun anyway.’ So, I tried out cross country.”

And, now, she added, “Cross country definitely takes precedence over track. I love cross country. I started it my junior year and fell in love with it. I wish I had started it way sooner.”

Noted Lady Hornets head coach Keith Dale, “We put her in Heptathlon last year or the year before but she’s always kind of been — Bree was kind of hard to fit into the track program because she was good at pole vaulting when we needed vaulters yet, with her cross country background, she was a really good distance runner. A lot of times, pole-vaulters and distance runners don’t really mix. So, instead of training her for more like the mile and two-mile, we put her in more of the sprint-type of races, mid-distance. So, if you look back at her track career, most of it is 800, the 4×800, something like that so that we can use her speed that’s required for the pole vault, then also have just a little bit of distance.

“I talked to her earlier and told her that I see Louisiana Tech using her during track season as a 1500-meter runner because, with her speed, with her endurance, that’s probably where she’s going to perform best for them,” he added.

“I love to pole vault and I love the 4×800, the 800 was fun as well,” Hood said. “Those sprint events weren’t my thing but definitely the more distance stuff is where I’m at.”

Even though she loved the distance races, Hood learned to love the events where she was needed.

“I want to be a team player,” she said. “I want to be there for my team. So, wherever they need me to fill in at, just put me in there and I’ll do it.”

“They’re getting a real hard worker,” Dale asserted. “She was one of our senior team captains this year that really led the team. She puts out a lot of effort. She’s always going to give you everything that she has. So, that kind of instills into the team, their expectations. If Bree can do it, I know I can do it.

“You can give her a task and she will get on it and take care of it,” he continued. “Whenever we have something that needs to go out, I’ll talk to Bree and say, I need the team to know such-and-such. And she’s on it. That’s what you need as a good team leader.”

Along with being all-conference in both sports and competing in the Heptathlon, Hood earned the 2017 U.S. Marine Corps Distinguished Athlete award. In 2016, she was named to the All-Arkansas Academic Track and Field team. In 2015, she turned in the fastest female time at the Kidsource 5K in Benton and was a gold medalist in the 2000-meter steeplechase — “kind of like hurdles on steroids for a long distance,” said Dale — and triple jump at the Junior Olympic regional meet in Tulsa, Okla. In addition, Hood was a member of the 2014 State championship cheer team that went on to capture a World Championship in Orlando, Fla.

That’s a lot of memorable stuff but Hood said she’s kind of fond of recalling a day back in November 2016.

“The biggest thing I’ll remember is our conference (cross country meet), she said. “We trained so, so much, pack-running. I just love the team to death. I became all conference for it and I’ll remember that meet forever. It’s was one of my most fun meets.”

She was 10th overall in a time of 21:58.52 in a pack of four Lady Hornets (including Sydney Wilson, Olivia Orr and Bailey Brazil) that all finished in the top 11 and helped the Lady Hornets finish as conference runners-up.

“They ran a very smart race,” Dale said that day.