LEVELLAND, Texas — The Bryant 10-year-old All-Stars opened the 2011 Cal Ripken Southwest Regional tournament with an[more] 8-0 shutout win over Andrews, Texas. The winner of the tournament will advance to the World Series, which will be played in Winchester, Va., beginning on Aug. 12. 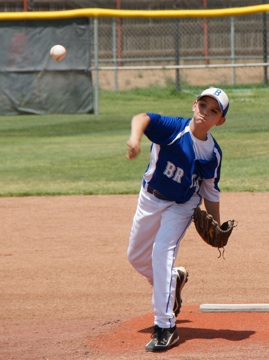 Bryant batted first and went 1-2-3, with two of the outs coming on strikeouts. In the bottom of the first, Grant allowed just a two-out single to center.

In the top of the second, Bryant shook off some early nervousness and plated three runs. With one out, Dupree drew a walk. Lessenberry followed with a bunt down the first base line and beat it out for a single. Mullings walked to load the bases, bringing Shepard to the plate. After taking the first pitch for a ball, Shepard fouled the next three pitches down the first base line before finally getting a pitch he could handle and driving it up the middle to score Dupree and Lessenberry and move Mullings to third. Sheppard moved to second on the throw to the plate. Greiner then dropped down a sacrifice bunt with Mullings scoring from third and Shepard going to third. Catton ended the inning by striking out but Bryant was up 3-0. 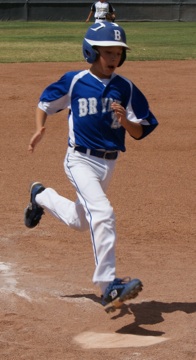 After Grant set Andrews down in order in the bottom of the second on two ground balls and a strikeout, Bryant added to its lead. With one out, Chambers walked. McFarland hit a grounder to shortstop to force Chambers at second for the second out. Dupree smacked a hard liner into the left-center gap for a double that scored McFarland all the way from first. A wild pitch moved Dupree to third as Lessenberry walked to put runners on the corners. On a designed play, Lessenberry broke for second and got caught in a rundown. Dupree broke for the plate and beat the infielder’s throw to the catcher but the inning ended as Lessenberry was thrown out trying to advance all the way to third. In the bottom of the third, Grant set down Andrews in order again, with the final out coming on McFarland’s good scoop of a low throw to first. Bryant led 5-0 heading into the fourth.

Bryant threatened in their half of the fourth but came up empty. With two outs, Greiner reached when the Andrews first baseman was off the bag while receiving the throw from the second baseman. Catton grounded a double down the first base line that drew chalk and Greiner was waved home but was thrown out at the plate to end the inning. In the bottom of the fourth, Grant allowed a two-out single to right-center but needed just seven pitched to retire the side.

In the top of the fifth, Bryant got a one-out single by Chambers on a high-hopper to the third baseman but McFarland and Dupree struck out to end the inning. In the bottom of the frame, Grant used just nine pitches to set the side down in order once again. 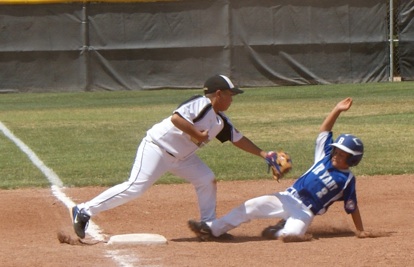 Bryant picked up insurance runs in its last at-bat. With one out, Mullings lined a double to left-center. Shepard grounded to third with Mullings advancing on the throw. Bariola hit for Greiner and drew a walk. Catton stepped in and lofted a long fly to right-center for a double when it went off the glove of the lunging center fielder. Bariola scored on the play. Grant smacked the next pitch over the center fielder’s head for another double that moved Catton to third base. Chambers hit a grounder to the shortstop, who bobbled it for an error, which scored Catton. Bryant’s lead was 8-0 heading to the bottom of the final inning.

In their final at-bat, Andrews put two runners on base for the only time. With one out, their leadoff hitter reached on a pop fly when McFarland lost the ball in the late afternoon sun. The next batter singled to put two on. Grant then knocked down a hard come-backer to the mound and recovered the ball to get the force at first, with the runners moving to second and third. Grant then finished his shutout by getting a grounder to Dupree at third, who fired to first to end the game.

Next up for Bryant is a matchup with Tri-County, Texas. Game time is 1 p.m. on Sunday, July 24. 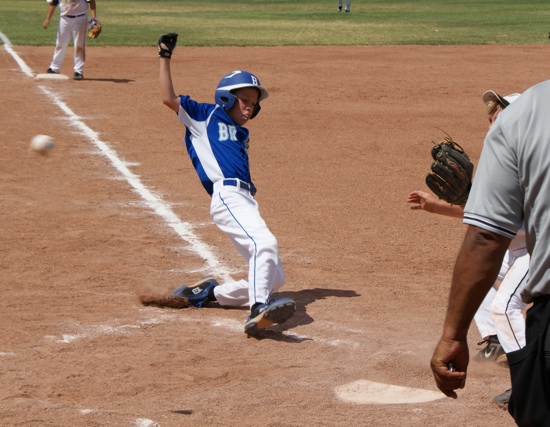