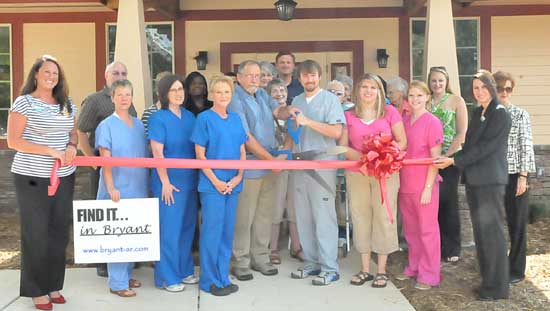 Alexk Hamilton was inspired to become a dentist by serving in missions from his church in Mexico.

Not only that, but his father Wes Hamilton has been a practicing dentist for 33 and half years in southwest Little Rock at his office on Chicot Road.[more]

Now the two have combined their efforts upon Alex's graduation from dental school and formed Hamilton Family Dentistry located on Springhill Road just behind the Big Red/Valero at the intersection of Springhill Road and Highway 5.

"My dad has been in practice for a long time and the majority of his patients moved to this part of town, so when I graduated from dental school, my wife and I moved to Bryant and decided to build an office together," Hamilton said. "I got hooked on it when we were going on mission trips to Mexico and I knew it was something I wanted to continue doing. I didn't want to be on-call all the time. I wanted to be a dentist and work four days a week and support a family."

Hamilton is amazed at how much Bryant has grown and is proud to call it home for his business.

"If you drive along Highway 5 from Otter Creek, every piece of property has a “For Sale” sign in it or it has been sold,” he said. “Springhill Road is supposed to be widened and they built a school down the road. It's growing so much and Bryant is the best place to build a business."

Hamilton Denistry was recognized by the Bryant Chamber of Commerce in a ribbon-cutting ceremony on Thursday, Aug. 12.