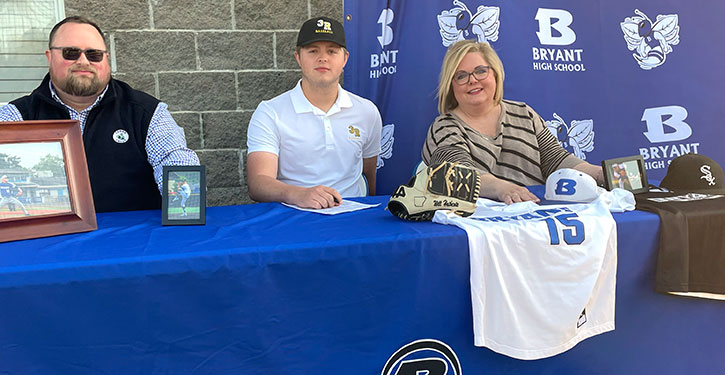 Hathcote signs to take his ‘stuff’ to Three Rivers

Some say “stuff” when referring to a pitch is difficult to define. It’s one of those things you can say that you know it when you see it.

One definition is that “stuff is a pitcher’s pitches, judged by how inherently hard those pitchers are to hit.”

“Stuff refers to how good a pitch is at being the pitch it’s supposed to be.”

Both of those will work when describing Will Hathcote. The big senior right-hander of the Bryant Hornets has good “stuff.”

And, this fall, he’ll be taking it to Three Rivers Community College in Poplar Bluff, Mo. A signing ceremony for him and teammate Aiden Adams was held at Bryant High School Field on Wednesday. He is the son of Wes and Nicole Hathcote.

“Will is a guy that, from the moment he walked into the program — he had confidence in himself,” said Hornets head coach Travis Queck. “Not necessarily that we didn’t. But he was a freshman, and you would think, as a freshman, he’d have some hiccups along the way. But even when he had hiccups, he got himself out of situations. He had a knack, being a true competitor, a guy that, after the first part of last year, was our ace last year.”

Of course, last season for the Bryant Hornets was over after five games due to COVID-19 restrictions.

“This year, he’s definitely a piece to the puzzle that we’ve got to find to reach the level we want to get to,” said Queck, who has a strong staff. “We have arms and he’s definitely one of the guys we’re counting on.”

Hathcote has a strong summer and started this season well, winning twice and allowing only two earned runs in his first nine innings.

In his arsenal, Hathcote throws a sinker, a cutter, a curve and a change along with his fastball.

“And every one of them have a tremendous amount of movement on it,” Queck asserted.

“Will’s out pitch in the past has been his little slider,” he noted. “He feels pretty confident in it. It has a tremendous amount of break. When he can tunnel all three pitches, he’s filthy. It’s unhittable at times.

“We always talk, as a program, just missing barrels. Get them to miss-hit barrels, get them to put it in play and let our defense work. And Will has drawn a lot of that weak contact.