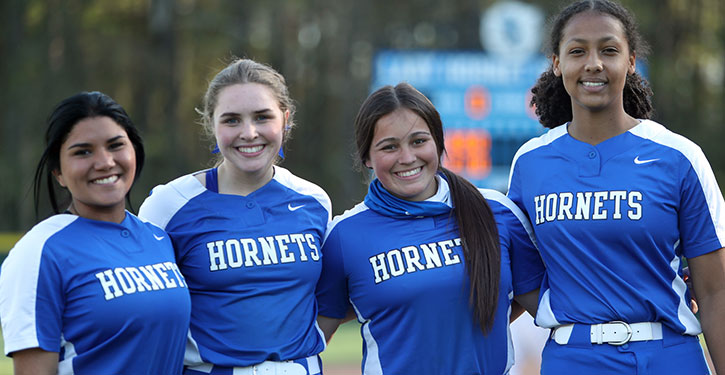 Hicks faced just nine batters and struck out six. It was Bryant’s fourth shutout in its last six games and improved the Lady Hornets to 9-3 overall, 3-0 in 6A-Central Conference play.

Bryant heads to the annual River City Rumble in Van Buren on Friday. They’ll open against Brookland then play either Rogers or Atkins.

Gentry’s slam ended the game in accordance with the 15-after-3 mercy rule.

The first two batters that Hicks faced made contact but grounded out. She then struck out six in a row before a lineout to short ended the top of the third.

Bryant took a 2-0 lead in the bottom of the first. Suarez was hit by a pitch and Herring tripled to chase her home. A passed ball allowed Herring to score.

A second-inning outburst turned into an 11-run explosion, starting with a double by Bracey. Gentry’s single to left brought her home. A passed ball and a wild pitch allowed Gentry to reach third. After Hicks drew a walk, Suarez picked up the RBI with a groundout.

As Herring was drawing a walk, a pair of wild pitches allowed Hicks to come around to score, making it 5-0.

A stolen base and a passed ball had Herring at third as Arana drew a walk. Emma Bonvillain’s grounder to short was kicked and both runners scored.

With Bonvillain on second, Mefford beat out an infield hit. Regan Dillon’s groundout picked up a run to make it 8-0.

After two were out, Gentry came through with her triple as the lead expanded to 10-0. She scored on the play as well when the ball was booted in the outfield.

Hicks got the carousel rolling again with a single. Courtesy runner Bailey Glenn stole second and scored on a lined single to right by Suarez. And when the ball was misplayed in right, Suarez circled the bases to cap the inning.

Up 13-0, the Lady Hornets started the bottom of the third with a walk by Haley Halbert. She beat the throw to second on Mefford’s grounder to short. So, when Emily Miller’s grounder was misplaying, the bases were loaded.

Halbert scored on a passed ball then Bracey drew a walk to fill the sacks again for Gentry, who lifted the first pitch she saw over the wall in left for her game-ending grand slam.