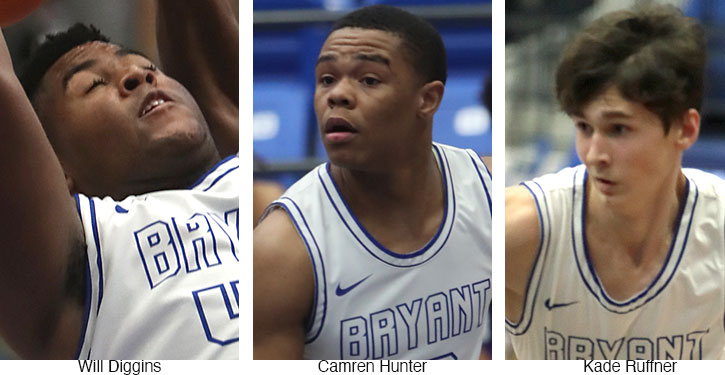 Camren Hunter, who, from all information available, is the leading scorer in Bryant High School history, has been named all-State, all-State Tournament, and all-conference after his senior season. It is his fourth all-conference selection.

In addition, junior forward Kade Ruffner and junior post Will Diggins were named all-conference for the 2020-21 season for the Hornets, who finished 19-5 overall and 10-4 in the 6A-Central Conference and reaching the quarterfinals of the State tournament before losing a heartbreaker to Bentonville, the 6A-West regular-season champion.

Hunter led the Hornets in points at over 19 per game, rebounds with an average of 7.5 a game, assists at 4.5 and had a 2-to-1 assists-to-turnover ratio.

“He led us in steals, blocked shots and deflections, which is a stat that we keep — it’s not an official stat,” noted Hornets head coach Mike Abrahamson. “It’s basically a hustle stat which is blocks and charges, tipped passes, swatting away a dribble from the other team, diving on a loose ball. Things like that.

“He did a lot for the team,” he continued. “We played through him. We put the ball in his hands. A lot of teams tried to stop him, and nobody really could. I got a lot of comments from opposing coaches that they did about everything they could do to stop him and couldn’t really do that.

“He’s just a guy who can score really in any way from posting up to driving to shooting a mid-range shot, to shooting a 3, or getting to the foul line,” the coach added. “But also, was a great and willing passer as he always has been. For the team, we needed him to score more this year and he knew that, accepted that and that was his role more this year than in years past.”

Hunter surpassed 1,000 points midway through the season, joining only Romen Martin in that group at Bryant and surpassed Martin’s total to become the all-time leading scorer.

“He obviously meant a lot to what we did,” said Abrahamson. “You always want more for him. I wish we could’ve won a state championship for him, but we just couldn’t get over that hump. We’ll miss him but it’s also an opportunity for others to grow and step out of the background into the light.”

“Kade was just great all year long for us,” said Abrahamson. “He was our best offensive rebounder, second in blocks, second in rebounding. Obviously, a great shooter.

“What I was impressed with was his defense and staying out of foul trouble and doing so much for our team,” he continued. “We’re excited to have him back. He had a great year and hopefully he’ll do even better next year.”

Ruffner moved in after attending Bentonville West as a sophomore.

“As someone that’s new to the program and new to the school and even new to central Arkansas, to be new and to throw everything at him that we did, all those different little things that we do, he picked everything up quick and really competed hard,” Abrahamson said.

Diggins, an all-state offensive lineman for the State champion Hornets football team, was often assigned to play against much taller post players.

“Will used his body well this year and scored around the basket,” Abrahamson said. “He came back to us this year and he was two inches taller and about 40 pounds stronger. For his size, to move so well and have the hands that he has — he wasn’t obviously, the biggest post player in the conference, but was good for us and really effective for us.

“He had some really good games in conference,” he mentioned. “He even ended up making a few 3’s. He’s expanding his game. Hopefully, he’ll keep improving and have a good senior year.”

Abrahamson added, “We had some guys that also had some good games that maybe could’ve made it but didn’t quite do it every game. Drake Fowler and Cory Nichols were right there. We look for them to step up next year as well.” 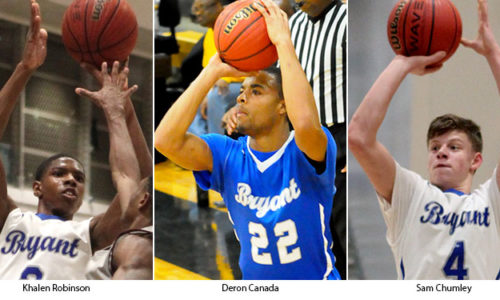