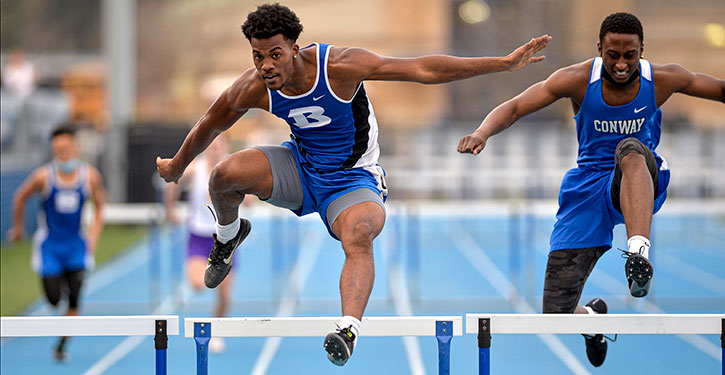 For more photos of this event by Jimmy Jones of Jones Sports Media, go here

LaQuav Brumfield won two events and earned high point honors while Kaleb Knox and Kyle Knox each won one and the Bryant Hornets finished first in two relay events as they amassed 171 points to win the annual Hornet Relays at Hornet Stadium on Tuesday night.

The 4 x 200 relay team of Gabe Allen, Kyle Knox, River Gregory and Kaleb Knox set a school record with their winning time of 1:31.11.

In addition, Brumfield was third in the high jump, clearing 5’8”. Nasir Vincent was fourth at the same height.

“We had several outstanding performances,” said Oury. “LaQuav Brumfield came to us when the swim and dive season was over, so we’ve had him for less than two weeks. He hasn’t run track since ninth grade, but you wouldn’t know it. He’s just a gifted athlete.

“Kaleb and Kyle Knox both had great meets,” he added. “They are both versatile athletes who have helped us tremendously in the sprints, hurdles, and jumps.”

The Hornets also picked up fifth-place points in the 4 x 100. Martavion Earl, Remulus Herrien, Hare and Vincent ran a 46.24.

“I thought we had a good all-around meet,” said Oury. “We scored points in all phases.”

Regarding the fact that all of the 6A-Central Conference teams were on hand, the coach added, “I don’t think we can read too much into the team results this early in the season, but it was certainly an encouraging team performance.”

Bryant runs next on Thursday, April 1, in a meet at Scott Field in Little Rock hosted by Central and Southwest High Schools.