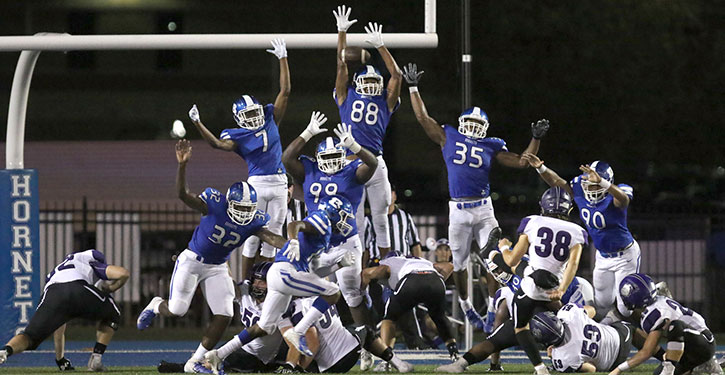 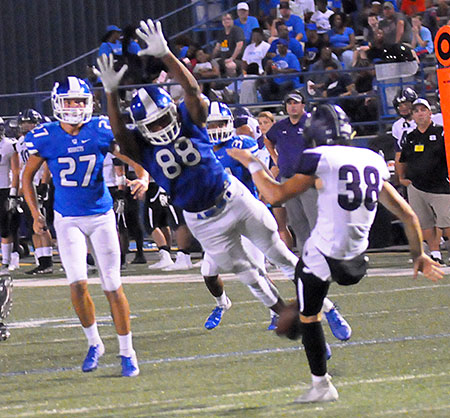 The ball was loose. Fayetteville Bulldogs wide receiver Connor Flannigan had picked up a first down on a reverse play, converting a third-and-7 with time running out and the Bryant Hornets trying to get the ball back for a last-ditch chance to score and pull out the win.

Linebacker Ahmad Adams knocked the ball loose from Flannigan and the video shows that the runner was clearly continuing to run. In the scramble for the fumble, Hornets’ safety Tamaurian Wilson recovered with 1:30 left to play.

But a long discussion followed, right in front of the Fayetteville sideline, with Bulldogs’ coach Billy Dawson joining in. One official signaled that Flannigan had gone down before the fumble but that was over-ruled.

James came out to midfield, hoping to get a word in but it wasn’t until it was decided that there had been an inadvertent whistle during the play that the officials came to him. Though none of the players acted as though they heard it, that call stood despite James’ protests and those of irate Bryant fans. 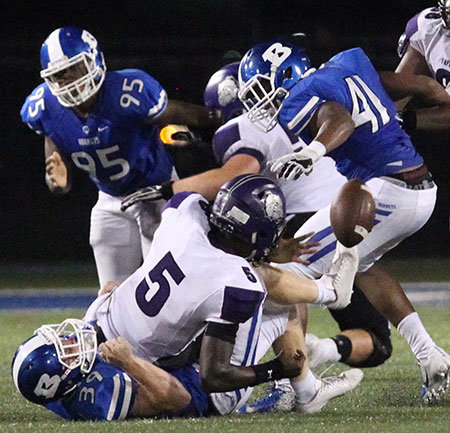 Jake Wright (39) brings down Fayetteville quarterback Darius Bowers as the ball comes loose. Kennedy Miller (95) and Daylan Land (41) fight to get to the ball. (Photo by Rick Nation)

Now, there’s no telling whether the Hornets could’ve cashed in the turnover, but they didn’t even get a chance.

When the ball was placed at the 30-yard line with Fayetteville still in possession, the Hornets, out of timeouts, had no chance and the Bulldogs held on for a wild 36-35 victory in the final non-conference game of 2018.

That last call was just the last straw.

With the Hornets protecting a 35-21 lead down the stretch, it seemed Fayetteville got crucial first downs on penalties against Bryant.

When the Bulldogs drove for a field goal, they were out of range on a fourth-and-21 at the Bryant 34. Moments after linebacker Jake Wright had sacked Fayetteville quarterback Darius Bowers (and a fumble had been overlooked), the Hornets had the nifty signal-caller scrambling to keep the fourth-down play alive. 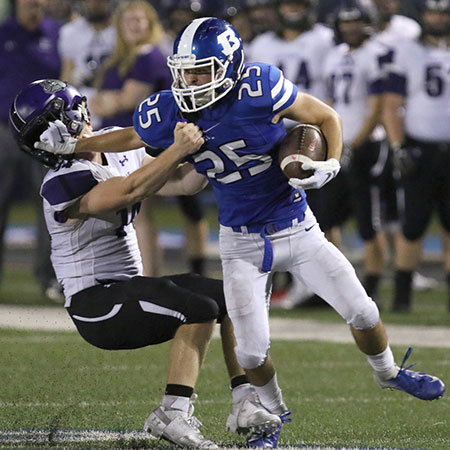 Brandon Jett (25) tries to slip past a Fayetteville defender with a stiff-arm. (Photo by Rick Nation)

Downfield, early in the play, well before Bowers wound up flinging the ball, a flag flew in from the end zone.

Bowers’ throw fell incomplete, almost intercepted by the Hornets’ Hart Penfield. It looked like Bryant would be taking over on downs with its 14-point lead intact.

The penalty, however, was defensive holding and, though it didn’t give the Bulldogs a first down after it was marked off, it left kicker Huxley Richardson within range for a 42-yard field goal.

Holding Fayetteville to 3 points seemed significant at the time but the field goal thanks to the penalty added to the mounting momentum for the Bulldogs, who had stymied the Hornets on consecutive possessions, and was about to do it a third time.

With 11:28 left to play, Fayetteville regained possession but, after two plays left the Bulldogs with a third-and-7, Bowers tried to set up a tunnel screen to Flannigan. But Bryant’s defensive tackle Kajuan Robinson, seeing the play developing, peeled off his pass rush and stepped right into Flannigan’s path.

It appeared the Robinson hit Flannigan at the top of the breast plate, spun him around and down for a loss of 1. But, from the backside, the side judge decided that Robinson had spun Flannigan around by the face mask. 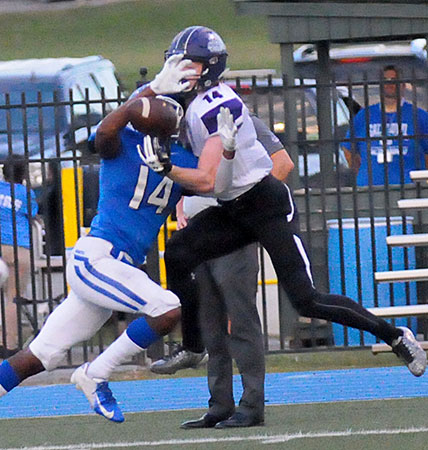 So, instead of a fourth-and-8 at their own 45, Fayetteville was awarded a first down at the Bryant 40.

Moments later, Fayetteville faced a fourth-and-1 at the Bryant 31. Bowers may have gotten the yard needed or he might’ve been short. But there would be no measurement. The Hornets were flagged for a personal foul and the ball was forwarded to the Bryant 16.

A play later, the Bulldogs scored to cut the Bryant lead to 35-30.

Bryant went three-and-out again and a short punt gave the Bulldogs just 39 yards to the end zone and a go-ahead score. It required a third-and-3 conversion on a run by Torrance Farmer, and a fourth-and-3 at the Bryant 12 that Bowers converted with a throw to Farmer for 5 yards.

Bowers ran it in from the 7.

Bryant foiled a try for two, but Fayetteville had the lead that would hold up for the victory.

“Officiating doesn’t ever beat teams, it just gives teams excuses for why they lost,” declared James. “A loser looks at it that the officiating was not good. It could be good. I haven’t seen the film yet.” 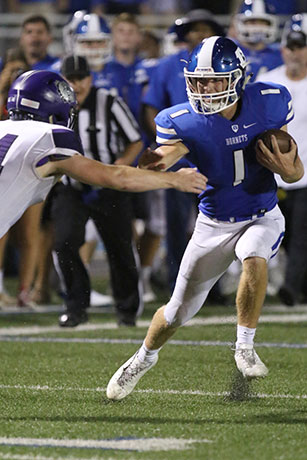 Ren Hefley (1) moves to step past a Fayetteville defender, capping off a 30-yard touchdown run. (Photo by Rick Nation)

“But that’s not what got us beat,” he insisted, for the record. “That’s playing bad in the first and second quarter, and the fourth quarter. That’s why we got beat.”

The Hornets fell behind the Bulldogs 21-7 in the first half but put together a 28-point blitz to start the third quarter to take the 35-21 lead. And they forced Fayetteville to punt. Up 14, Bryant had the ball at their own 34 with 3:46 left in the third period.

The Hornets only managed one first down from that point to the end of the game. The lone first down was on a desperate drive after Fayetteville had regained the lead. Quarterback Ren Hefley found Jake Meaders to convert a fourth down. But, four plays later, they were giving it back to Fayetteville on downs near midfield, resulting in the final possession, including the fumble that wasn’t.

“We played to our potential in the third quarter,” James asserted. “We played with a lot of heart and character, and we had a lot of things go our way.  That’s how I expect us to play.

“Then we started playing not to lose,” he continued. “We got to where we didn’t want to make the same plays or do the same things. We were calling the same stuff. We still had the same people open. We just didn’t execute, whether we didn’t block right or whatever.

“Our defense stayed on the field and (Fayetteville) got momentum back,” the coach mentioned. 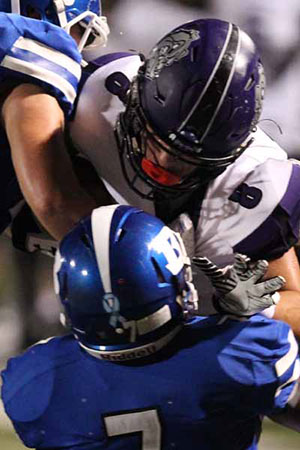 Tamaurian Wilson (7) fights with Fayetteville’s Brooke Flannigan for the fumble that wasn’t a fumble due to an inadvertent whistle. (Photo by Rick Nation)

Winning by one point had to be satisfying for the Bulldogs who lost twice by 1 point to the Hornets including a playoff game that ended Fayetteville’s season.

James saw his team’s performance as another in which they couldn’t put four quarters of their best football together.

“Really since that game last year in the playoffs, we’ve felt everybody out,” the coach said of the tentative start by his team. “We go out there and see how hard (the opponent is) going to play against us and how bad they want it. Then we decide we want to play in the second half. You’re not going to beat good football teams doing that. You’ve got to go out and compete for four quarters.

“You’ve got to give Fayetteville a lot of credit,” he added. “That’s why we play those guys. We play them because they are a good football team. They do have a good program and it will make us grow.

“We can’t look at it like we lost a game we could’ve won. We look at it as a learning experience and we improve from it. And, if we can do that, then we haven’t lost anything. It’s just a non-conference game. But, we’ve got to start coming out and playing football and play like we’re capable of playing, start to finish.”

The Bulldogs started the game with a six-play, 65-yard drive for a touchdown aided by a pass interference penalty. On the next snap, Bowers scrambled in from 19 yards out. 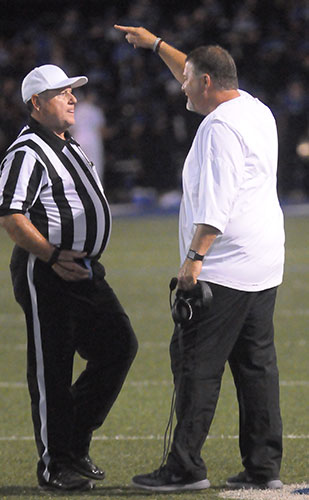 The game was full of penalties. Between the two teams, there were 19 penalties marked off (10 on Fayetteville), accounting for 198 yards.

The teams traded punts then the Hornets put together a drive that reached the Fayetteville 26. On a third-and-4, Adams appeared to pick up the first down with a 6-yard burst but a holding penalty on the play proved to be too much for Bryant to overcome. They turned it over on downs at the Bulldogs’ 31.

On Fayetteville’s first play from there, Bowers found Flannigan behind the Bryant secondary for a 69-yard touchdown and a 14-0 lead.

The Hornets’ first score came after Catrell Wallace recovered a fumble at the Fayetteville 27. Aided by a pair of pass interference penalties, Bryant drove to the 1 where Latavion Scott plunged in.

With lost-yardage tackles by Robinson and Wallace, the Bulldogs faced a third-and-14 at the 21. A sparkling headlong dive for a catch at the 1 by Flannigan not only kept Fayetteville alive, it set up Flannigan’s 1-yard touchdown run in the final minute of the first half.

The Hornets looked like a different team as the second half got underway. They scored on a three-play, 80-yard drive that including a 50-yard completion from Hefley to Brandon Jett. On the next play, Hefley found River Gregory for a 28-yard touchdown pass.

With Grayson Scoles’ PAT, the Hornets were within 21-14. 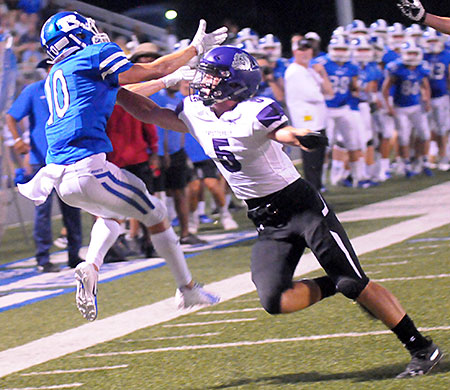 Knockdowns by Derek Rose and Christian Cain helped force a Fayetteville punt. But Wallace broke through and blocked it. The ball ricocheted toward the end zone and was covered by the Bulldogs at the 1.

The Hornets took over and Scott scored, and the Hornets had pulled even less than two minutes into the third quarter.

And they weren’t done. The defense, which didn’t allow a Fayetteville first down until late in the third, force another punt but only moments after Wright sacked Bowers, jarring the ball loose. Bowers was ruled down before the ball came loose. 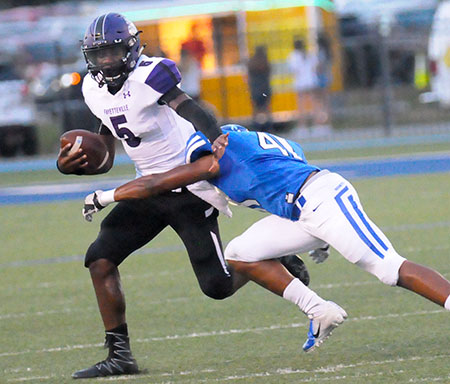 The Hornets responded with a four-play, 63-yard bust that included a 28-yard completion from Hefley to Meaders. That set up Hefley’s tackle-breaking 30-yard touchdown run that put the Hornets ahead for the first time.

A three-out out followed as Austin Bailey, Kennedy Miller and Josh Salguerio made strong plays on defense.

A short punt left the Hornets just 51-yards from the end zone. A screen pass to Scott broke for 25 yards with a horse-collar tackle penalty tacked on. Hefley tossed a pass to Scott again and he turned it into a tremendous run for points. 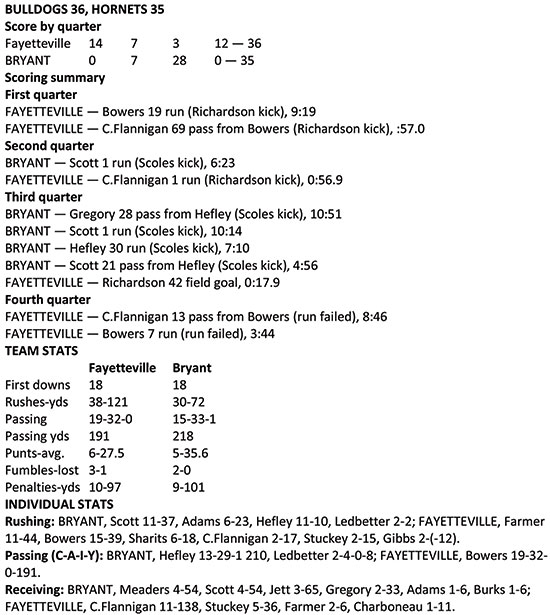