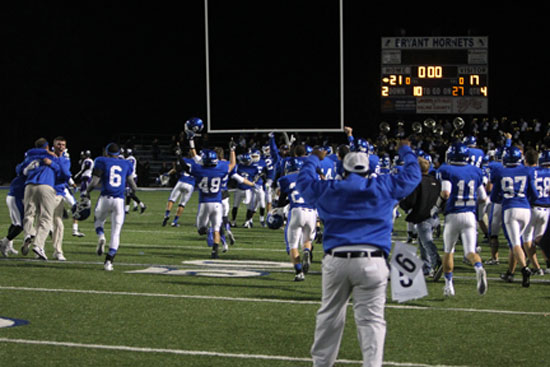 It was kind of like one of those movies where you think it’s over but it’s a false ending. Something else happens and it continues before it finally ends. 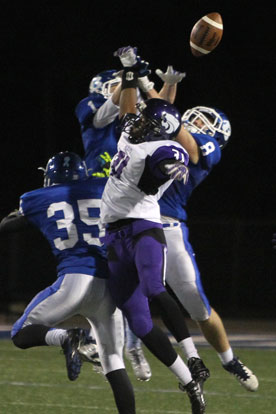 The Bryant Hornets defense stopped one fourth-quarter drive by the El Dorado Wildcats with an interception by Davis Nossaman, his second of the night.

With under three minutes to play, the Hornets had to punt and, when El Dorado jumped into the neutral zone only to have the penalty not called, the Wildcats got another shot driving to near midfield before a fourth-down pass was knocked down by Drew Tipton with 1:12 to go.

El Dorado used its timeouts and forced the Hornets to punt again. But this time, they had just :14 to go 73 yards with no timeouts. After an incomplete pass, Wildcats’ quarterback Clayton Waldrums made one last desperate throw that was caught deep down the middle but a group of Hornets tackled the receiver, Kobi Willis, as time ran out.

The last scene had finally unfolded and Bryant had won the battle for the 7A/6A-South Conference championship, 21-17, in a drama-packed battle.

Coupled with Bentonville’s 35-21 win over Fayetteville, it is believed that the Hornets picked up a number two seed in the West for the Class 7A playoffs, a first-round bye and a home game in the quarterfinals on Friday, Nov. 22, when they’ll play the winner of the North Little Rock-Rogers Heritage contest, which will take play on Friday, Feb. 15.

All of that after the team started the season 2-3, the worst start for a Bryant team since 1998.

“Early on, they could’ve quit, could’ve laid down when we had all our injuries and we had a couple of tough losses,” stated Hornets head coach Paul Calley. “Everybody’s kind of searching for answers but they didn’t quit. We kept working, kept coming to practice, kept improving. Young guys stepped up, guys we didn’t really expect to play. But they bought in. They are unselfish. They are team first and they want each other to succeed. 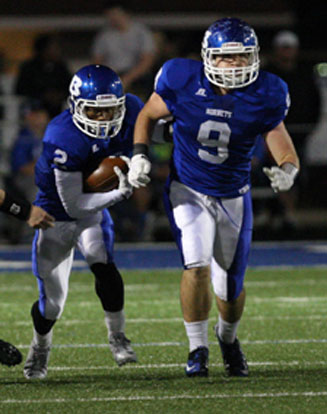 “That’s basically the way we’ve won games,” he emphasized. “It’s always a different person stepping up and getting the job done on both sides of the ball.

“The key to where we are is, we went back to what we do,” the coach explained. “We went back to the 4-3 defense (after trying a 3-4) and we went back to multiple formations and moving the ball on the ground with play-action passes.”

Led by senior DeVonte Howard’s 144 yards on 19 carries and 104 more on 15 totes by Kylon Boyle, the Hornets piled up 288 yards on the ground. Each of those guys had a touchdown, the other was run in by Brushawn Hunter.

The Hornets only attempted nine passes against El Dorado and the last one came on their final snap of the first half. It was intercepted at the 1 keeping Bryant from making it 21-10 at the break.

It was one of three Hornets turnovers, from a team that had committed just 10 in the nine previous games.

“We made some uncharacteristic mistakes that cost us,” Calley acknowledged.
“Mistakes we hadn’t made in six weeks. I don’t know where they came from. We’d been playing disciplined football, offensively, and we just made some bonehead mistakes. We had three chances to put the game away, three chances to ice it. We let them get back in it. I’m not taking anything away from El Dorado. They played hard but we tried to give it away. 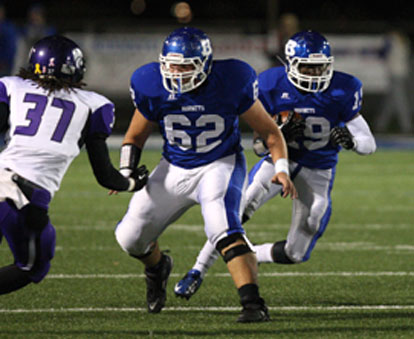 “The key was our defense, of course,” he asserted. “We rose to the occasion when we had to. We got a couple of key turnovers in the second half.”

The Hornets were rolling the start the game. They opened with a 10-play, 77-yard scoring drive, keyed by a pair of 13-yard runs by Boyle. Hunter carried the final 5 and, with Alex Denker’s extra point, it was 7-0.

El Dorado drove to the Bryant 48 where, on first down Cameron Murray and Mario Waits stopped Wildcats’ running back Jaqualoyn Williams for no gain. A second-down pass was incomplete then so was a third-down throw but the Hornets were cited for defensive holding, a rare call.

The Wildcats got to the Bryant 23 but dropped a touchdown pass on second down and couldn’t complete a third-down toss. A 40-yard field goal attempt was wide and the Hornets had turned back the threat. 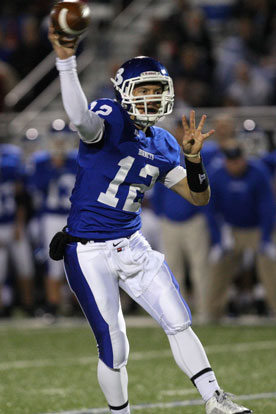 In turn, they drove 80 yards in nine plays to up the advantage. Boyle sliced through the El Dorado defense to score from the 7. Howard sparked the drive with runs of 11, 17 and 25 yards.

With Denker’s extra point, it was 14-0 just 16 seconds into the second quarter.

And when the Hornets’ defense forced an El Dorado punt, there was every reason to believe they could keep piling up the points.

But, in the punt, a Bryant blocker had the ball deflect off of him. The Wildcats covered it at the Bryant 19.

But they weren’t able to get into the end zone. A pass from the 5 was dropped in the end zone. On third down, Waldrum tried to find Ty Owens with a fade route but Tipton was there defensively and the Hornets had held.

Tipton came back on the ensuing kickoff and nearly took it the distance, driven down at the El Dorado 29. On the first play from there, however, Hunter never got a good grip on a handoff. The ball hit the ground then was inadvertently kicked toward the sideline. Fortunately for the Hornets, it went out of bounds and they retained possession. But they weren’t able to make up the yardage.

When Warner’s four-down pass to Wesley Akers only picked up a yard, El Dorado absconded with more momentum as an opportunity for Bryant to make it 21-3 slipped past.

And El Dorado took advantage. Waldrum snuck it in from the 2 with 2:18 left in the half. It was the first touchdown that the Hornets’ first-string defense had given up in 19 consecutive quarters, dating back to the second quarter against Pine Bluff in week five. 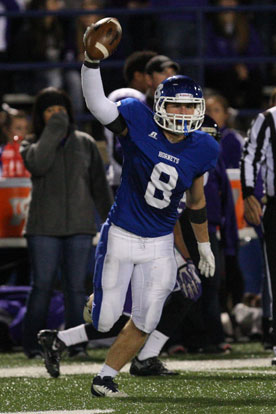 Davis Nossaman celebrates one of his two interceptions. (Photo by Rick Nation)

Their lead down to 14-10, the Hornets drove the El Dorado 8. Warner completed four consecutive passes, the big one coming on a screen to Boyle who turned it into a 29-yard gain. He was stopped by a hustling Wildcat at the 11, a fortuitous tackle for El Dorado because two plays later, Jactavius Williams stepped in front of Warner’s pass in the left flat and it was a 4-point game at the half.

The Hornets did not attempt a pass in the second half.

“(El Dorado) had us game-planned pretty good in the passing game,” Calley said. “We had had such success running the football, we didn’t want to put it in the air and we wanted to run time.”

Nossaman’s first interception ended the opening possession of the second half. It came moments after an illegal block penalty had negated much of Waldrums’ 40-yard scramble on a third-and-10 play.

The Hornets’ first series of the second half was much like the first two in the opening half. Boyle slashed 17 yards, Savonte Turner added a couple of tough runs and, on the seventh play of the drive, Howard dashed 12 yards to paydirt, extending the lead to 21-10.

And the defense stepped up again. El Dorado drove to the Bryant 39 where, on third-and-1, the Hornets stuffed a quarterback sneak by Waldrums. The Wildcats went for it on fourth down. This time, Williams was stood up short of the first.

“They came up big on several occasions,” praised Hornets defensive coordinator Steve Griffith. “It was a team effort, a variety of kids that were coming in. We had some younger guys step up and play well when they had to. Just a great team effort, which is what we’ve been emphasizing since the Catholic game. The kids have bought into it. It’s us. If we can keep working that way, I think we can give ourselves a shot in the playoffs.”

Given a chance to bump up the margin, the Hornets gave to Boyle who darted 19 yards into El Dorado territory. But the ball was ripped loose at the end of the run and the Wildcats recovered. A play later, Waldrums threw deep to Owens who, despite having the ball tipped by Tipton, came down with it and stepped into the end zone to cut the margin to 21-17 with 1:09 left in the third quarter.

The Hornets responded with a steady march to the El Dorado 4. After Howard was dropped for a loss back to the 9, Boyle nearly got to the end zone on a third-down run. That set up a fourth-and-1 at the 2. After a timeout, Bryant went for it and Boyle couldn’t get back to the line of scrimmage.

“I’m still questioning going for it on fourth down on the goal line,” Calley said after the game. “I should’ve kicked a field goal and put us up 7.”

The Wildcats used the old hook-and-ladder play to get out of the deep end. Waldrums threw to Kawon Love in the right flat who lateraled to Owens out of the backfield. He sprinted up the sideline before being caught by Hornets’ safety Jake Johnson at the Cats’ 38.

The Hornets thought they had another turnover when Dadraques Harris caught a pass and was drilled by Tipton. The ball came loose and Bryce Denker scooped it up ready to score but the pass was called incomplete.

Waldrums followed up with a 20-yard toss to Owens to the Bryant 39. With senior Jarron Wade and sophomores Cameron Murray, Mario Waits and Kameron Guillory rotating into three defensive linemen spots the Hornets got a strong rush on Waldrums. He was forced to take off from the 39 but only got free for 2 yards thanks to a hold that prevented Wade from getting him for lost yardage.

The penalty moved the Wildcats back to the 45. On the next play, Murray flushed Waldrums out of the pocket, Wade chased him to the sideline and Guillory hit him just before he unleashed his pass. Nossaman picked it off with 5:58 left to play.

The Hornets ate up over three minutes of clock before deciding to punt on fourth-and-1 at their own 49. That’s when El Dorado jumped offsides but got away with it.

The Wildcats pushed out from their own 12 to the 46 where Wade deflected a Waldrums pass. Waldrums caught the deflection and was brought down for a loss.

Flushed from the pocket on third down, Waldrums overthrew his receiver and Nossaman nearly had his third pick.

That led to Tipton’s break-up with 1:12 left. The Hornets went three and out but left El Dorado with just those final 14 seconds. 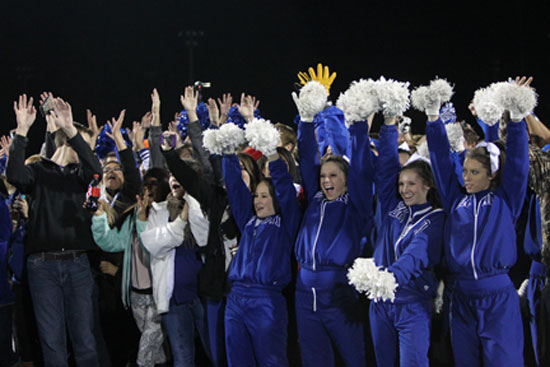