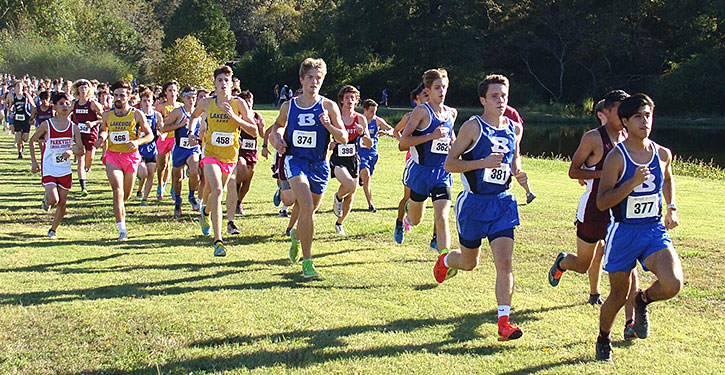 The meet included 16 teams with three other schools represented.

Conway won the meet with 70 points but Hot Springs Lakeside was only six points back and the Hornets finished with 84 to beat out 6A-Central Conference rival Cabot (92). Conway’s John Sutton took individual medalist honors with a 16:06.01 clocking.

“We ran well, especially considering the heat,” commented Hornets head coach Steve Oury. “It was just warm enough to make it a challenge, so I thought we handled it well. Bishop Park is usually a fast course, so when I saw that no senior boys ran under 16 minutes, I knew the warmth was a factor.

“Bresner Austin did a great job of hanging in there and passing a few athletes in the last half mile to place fifth,” he continued. “Chris Herrera and Brady Bingaman worked together very well throughout the race. Freshman Payton Brack ran his first race on the senior high team and earned a top 20 medal. He will only get better as he gets more experience at the 5k distance.”

The Hornets are tentatively scheduled to run at the Lake Hamilton Invitational at Oaklawn Park on Saturday.

“The Bryant coaching staff greatly appreciates all of the volunteers that helped to make this meet happen,” Our said. “We couldn’t do it without them.”