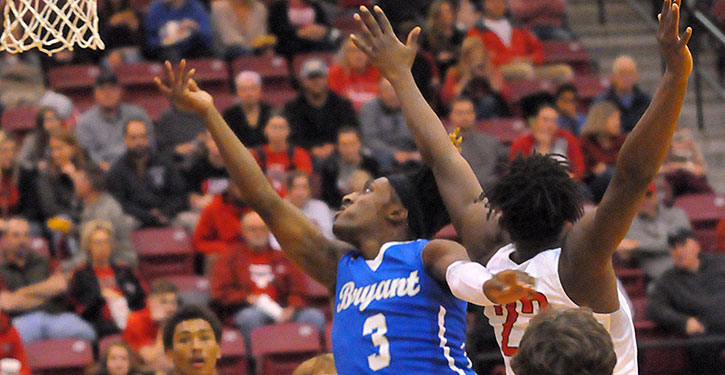 Hornets change the pace in second half to shake Cabot

CABOT — The Cabot Panthers basketball team tore a page from the school’s football team Friday night as they tried to knock off the red-hot, first-place Bryant Hornets.

And as long as they made a few shots and didn’t get much behind the Hornets, it worked.

In fact, Cabot led much of the first half and more than halfway through the third quarter.

The Hornets stayed right with them and never fell behind by more than 3. But then, Bryant was unable to push a lead beyond 3 of 4, either.

That 2-point deficit turned into a 16-point lead as the Hornets surged to their 11thwin in a row, all in the 6A-Central Conference, and 17thin their last 18 games, with a 49-33 victory.

Now 20-4 overall, the Hornets have clinched at least a share of the Conference championship. The two teams that can still catch them are their next two opponents, North Little Rock, which will be in Bryant for Senior Night on Tuesday, and Conway, where Bryant will close out the regular season.

A win in one of those two will make the Hornets the top-seeded team in the 6A State Tournament, set for Bentonville West, starting Feb. 27.

Otherwise, the Hornets could be second (and still get a bye) or third (playing on the first day of the tourney).

“Credit to Cabot for a great game plan,” said Bryant head coach Mike Abrahamson. “Stay patient, wait for us to have a breakdown. And we had a couple. They hit some 3’s. They did a really good job the first half of setting that tone and we had to adjust.

“We were playing really good defense in the first half, but it seemed like we were spending about two to two-and-a-half minutes on defense, working really hard — they were very patient — then we’d spend about eight seconds on offense,” he explained. “We were taking shots that we can make for the most part but, when you miss them, and you do that repeatedly, you spend hardly any time on offense and a lot of time on defense. So, we wanted to do something about that in the second half.

“Of course, in the first half, if you make a couple of those, it’s a different story maybe, you feel a lot better about it,” the coach mentioned. “But we weren’t so we had to make an adjustment.”

The change came on defense.

“Different kinds of defense, man-to-man and a couple of different presses,” said Abrahamson. “But our man-to-man is really what carries us. We just wanted to generate some pace (with the presses).

Cabot actually had a chance to add to the 23-22 lead, but the Hornets forced a turnover and Khalen Robinson fed Camren Hunter for a layup that put Bryant ahead to stay.

Treylon Payne made a steal and a layup then Arlon Jenkins converted a pair of free throws.

Rodney Lambert made a steal and the Hornets worked the clock down to the end. Robinson drew the defense and fired to Lambert on the left wing, who nailed a 3 to make it 31-23 going into the fourth quarter.

It was the largest lead of the game to that point.

The onslaught continued in the fourth quarter. Robinson, who was held scoreless in the first half, had a three-point play that made it a double-digit lead. Lambert dished to Payne for a 3 and it was 37-23.

Cabot’s Jackson Muse broke a long drought with a pair of free throws with 4:35 left to play. At the other end, Robinson knocked down two from the stripe.

After Muse missed a 3, the Hornets spread the floor on the Panthers. Robinson fed Hunter for a layup to make it 41-25 before Vance hit a 3.

Cabot cut the margin to 12 in the final minute, but Payne added free throws and Catrell Wallace scored off a Hunter theft to set the final score.

Lambert had 6 and Payne 5 in the first quarter, which ended with the Hornets ahead 11-7.

Bryant, which converted 16 of 20 free throws in the game, went 5 of 6 from the line in the first period.

Vance hit a 3 to start the second quarter. Lambert drove for a layup, but Cabot’s Brayden Roberts added a 3 to tie the game at 13.

Vance hit two free throws to give his team the lead with 5:35 left. Payne hit a free throw with 5:27 to go in the half then neither team scored the rest of the quarter, in part because the Panthers worked the ball so relentlessly on offense. Otherwise, the Hornets just weren’t hitting shots. They were 1 of 6 from the field in the second period.

The game was tied at 17 and at 20 early in the third. Wallace scored off a Robinson steal to give Bryant a 22-20 lead before Vance hit the 3 that produced Cabot’s last lead.

“We’re playing good defense and we’re following adjustments, as needed, really well,” Abrahamson observed. “I like that we’ve been able to win in different ways. I like that because you never know what you’re going to meet down the road. I like where we’re at, but we just have to stay focused and get ready for Tuesday.”