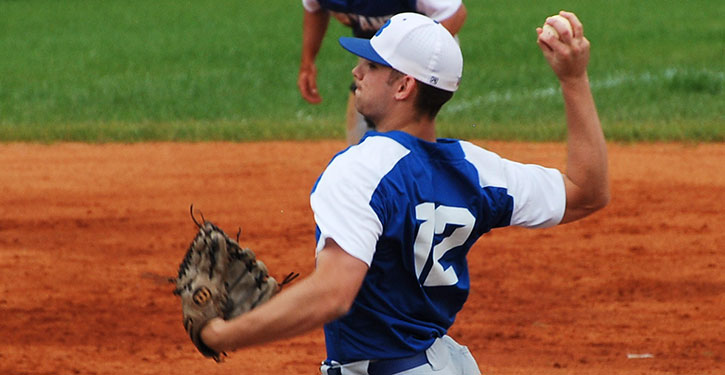 EDITOR’S NOTE: In this time of COVID-19, with no sports action, BryantDaily.com will be posting past stories of Bryant athletics either posted on BryantDaily.com (from 2009 to the present) or published in the Bryant Times (from 1998 to 2008).Photos courtesy of Crissy McEntire

LITTLE ROCK — The Bryant Hornets got their mojo back.

And it was just at the right time. After back-to-back losses on Thursday and Friday in which they managed just seven hits, the Hornets racked up nine on Saturday in the most important of the three-games-in-three-days weekend. The Little Rock Catholic Rockets were the last team that had any chance at catching the Hornets in the 6A-Central Conference standings but with the 7-0 win over the Rockets at Lamar Porter Field, Bryant eliminated the Rockets from contention and wrapped up the league crown.

Logan Grant turned in a stellar performance on the mound as the Hornets’ pitching remained solid. Through six innings, Grant allowed just two hits, one a grounder through the left side, the other a swinging bunt. Both were by Catholic’s Jack Foster. He walked two, hit a batter and struck out six.

Coby Greiner, the Hornets’ outstanding closer, came back from his only rugged night of the year on Friday, to work a scoreless seventh to close out the victory.

“It wasn’t defense and it wasn’t pitching,” said Hornets coach Travis Queck about the mini-slump. “It was us trying to make too much at the plate. We’ve got to put ourselves in those situations. We want to be in those situations. That’s kind of the challenge we had in B.P. (batting practice) today. I gave them a scenario, a situation, in the box and what we needed to do, had them think about it and execute it. And they couldn’t get out until they did execute it.

“We didn’t have it all the time today,” he added. “We definitely threw away a good opportunity in the sixth. But it wasn’t without effort. These guys are giving good effort, every time they’re at the dish.”

The coach credited his seniors, including Grant and Greiner along with Logan Chambers and Jake Wright, who both had clutch RBI hits.

“You know (football) Coach (Buck) James made a comment during football season that, this time of year, there’s something about seniors,” Queck said. “Something clicks and they’re either going to do it or they’re not going to do it. And I tell you what, we’ve got a dang good group of seniors.”

The Hornets were aggressive early. Taking advantage of Catholic pitcher Robert Bavon and catcher Jackson Baker, they stole seven bases in the first three innings as they built a 4-0 lead.

“We wanted to be aggressive,” Queck stated. “That was kind of our mindset. A lot of offense dictates what you’re doing. We wanted to get back to the way we want to play ball. The guys bought into that and felt comfortable.”

The Hornets scored in each of the first four innings. In the first, Noah Davis drew a one-out walk from Bavon, a hard-throwing right-hander who struggled, at times, with his control.

Cade Drennen drilled a solid single to left-center then Peyton Dillon walked to load the bases. Wright hit a pop up into shallow left-center that the Rockets’ left fielder Ethan Fowler got to but dropped. Davis scored.

Gage Stark followed with a fly to center. Lawson Speer, running for Drennan, tagged at third and tried to score but Catholic centerfielder Jordan McCuin threw him out.

In the second, Ryan Riggs beat out an infield hit, advanced to second on a wild pitch but remained there with two out. That’s when Chambers came through in the clutch, drilling an RBI single to center to make it 2-0.

In the third, Bavon walked Dillon and Wright but, in between, Dillon stole second and went to third when ball four to Wright was in the dirt. He rounded third and sprinted home when Baker’s throw to third was wild.

Wright swiped second then went to third on Riggs’ grounder to the right side. And when Grant drew a walk, courtesy runner Blaine Sears took off from first, drew a throw that second baseman Evan Stewart tried to cut off in order to throw Wright out at home but he fumbled the throw and Wright scored without a throw to make it 4-0.

Reese McWilliams had relieved for the Rockets and got the final out to send it to the fourth.

Meanwhile, Grant was mowing down the Rockets, facing the minimum over the first three frames. Foster singled to lead off the third but Fowler followed with a hot shot to Dillon at first. He was able to get to the bag then throw to second in time to double up Foster.

Baker struck out to send it to the fourth.

With one out, Davis drew another free pass. With two away, Dillon singled to left and Wright drilled a double to the fence in left center, driving both runs home to make it 6-0.

Grant worked around a lead-off walk to McCuin in the bottom of the fourth, then a hit batsman and Foster’s infield hit in the fifth. Fowler lined out to Greiner in center and pinch-hitter J-Matt Rogers flew to Stark in right.

The Hornets tacked on a run in the sixth. Davis and Drennan singled and Dillon walked to load the bases. With one out, Stark cracked a single up the middle to get Davis home to make it 7-0. But the Hornets left the bases loaded.

Another walk to McCuin and a passed ball put a runner at second in the bottom of the sixth but no Catholic baserunner ever got to third in the game. Grant fanned the next two and finished his moundwork by getting clean-up hitter Luke Hindman to fly to center.

In the home seventh, Greiner walked the first batter he faced but retired the next three, two on strikes to sew it up.

Bryant improved to 25-4 on the season, 11-1 in league play with two conference games left. They’ll host North Little Rock on Tuesday (though with the threat of heavy weather, the game may be moved to Monday).

With the league title, the Hornets will be the top seed from the conference at the 6A State Tournament, which begins May 9 in Rogers. Their first game will be on May 10 at noon.