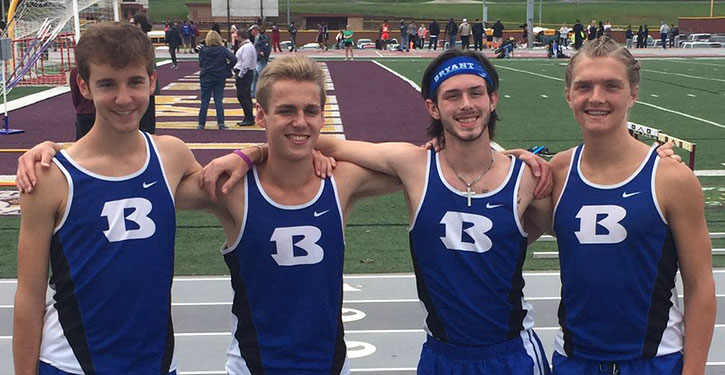 PEARCY — The Bryant Hornets’ 4×800-meter relay team of Jake Dreher, Hagan Austin, Hunter Ulmer and Ammon Henderson ran their season-best time of 8:09.51 to finish second only to Lake Hamilton (8:03.30) at the Meet of Champs on Saturday at Lake Hamilton High School.

The quartet won the 6A-Central Conference championship then finished fourth at the 6A State meet.

“They really went after it,” noted Hornets head coach Steve Oury. “Hagan Austin had a split of 1:59, while Ammon Henderson ran 2:00. They did a super job and finished the year off with a season best time. Can’t ask for more than that.”

The Hornets scored in five other events. Josh Robinson did so in an individual event, clearing 6’2” in the high jump to finish tied with Fayetteville’s Sam Hurley. He also contributed a leg to the 4×400 relay team. With J’Lun Herron, Darrick Rose and River Gregory, a 3:27.59 clocking earned sixth.

Joseph Young, Braden Williams, Braylon Butler and Robinson ran a 43.90 in the 4×100 to finish seventh while Darius Daniels took eighth place in the discus with a throw of 132’3”.

“I’m really proud of all of our seniors,” Oury concluded. “Today was the last meet for Josh Robinson, Braylon Butler, Braden Williams, J’Lun Herron, Jake Dreher, Hunter Ulmer, and Darius Daniels. They have done a great job for our program and will be missed.”

In the team standings, which aren’t nearly the focus at the Meet of Champs as they are in the conference and state meets, Bryant finished with 19.5 points to finish 10thin a field of 50 teams. Bentonville won the team title with 65 points to Fayetteville’s 63.5.