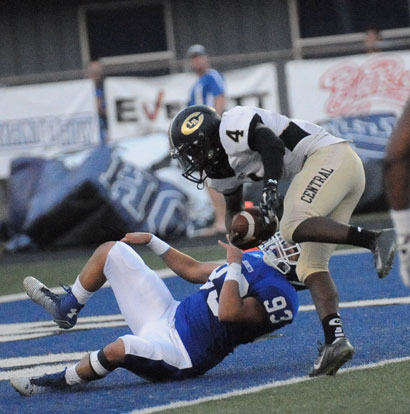 Do or die, feast or famine, hit or miss — in the past, the Little Rock Central Tigers pretty much stayed with their sound and solid base defense whenever they came up against the Bryant Hornets. But the results have been an eight-game losing streak against Bryant by an average score of 27-9.

As it turned out, it was give and take. The Tigers gave up some yardage and took some away but the result was just about the same as the Hornets rushed to a 23-0 lead and wound up winning 26-14 to improve to 3-0 on the season.

“They hadn’t played us that way many times,” acknowledged Bryant head coach Paul Calley. “That’s what we are seeing a lot more of. The big play possibilities are there but also it’s effective at stopping the run game. 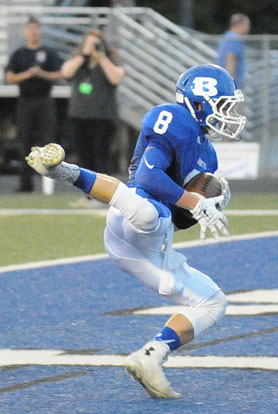 “They have good athletes on defense,” he continued. “Our interior line got whipped most of the night. When we were able to block them, their linebackers are small and their quick and they’re hard to see, hard to fit on, and they were running through gaps and tackling us in the backfield.”

Actually, the Tigers came up with 12 tackles for loss out of Bryant’s 63 offensive snaps but the Hornets took advantage too. Quarterback Gunnar Burks completed 12 of 22 passes for 164 yards and a touchdown to Aaron Orender who followed up a seven-catch night the previous week with six more grabs for 105 yard. And, despite the losses whittling down the total, Bryant rushed for 118 stripes. Cameron Coleman and Savonte Turner each had touchdown runs.

“The second half, we never did get in a rhythm,” Calley said after the Hornets managed just 3 points after intermission on a 40-yard field goal by Hayden Ray. “We were playing more not to lose. We got conservative. And that’s me. I wanted to get conservative.

After the game, I told the guys, ‘Be happy with the win but don’t be satisfied with the way we performed,’ he continued. “We’ve gone through this the last couple of years offensively. We would kind of sputter weeks three, four, five then we’d catch fire towards the end when we found out what our strengths were and what we really needed to be focused on.”

The Hornets defense came up big right away. On the second snap by Central at their own 20, quarterback Jordan McCarther rolled out to pass and was besieged by charging Hornets defenders. He gave ground, tried to reverse himself but ran smack into Bryant’s Madre Dixon who hauled him down for a safety.

After a free kick, the Hornets offense started with great field position at the Central 45. It was one of four first-half Hornets possessions that started on the Tigers’ side of the 50. 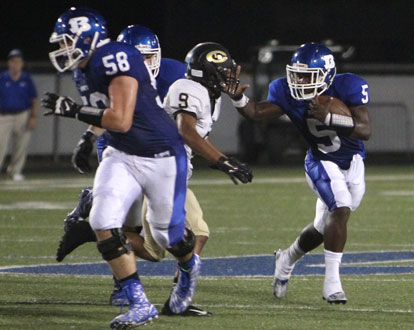 Behind the running of Turner, they picked up a first down then Burks completed his first pass, a 17-yard throw to Landon Smith. The drive eventually reached the 14 but, on the next two plays, the Tigers’ blitz cost Bryant yardage. After Burks was sacked at the 25, Ray came on to try a 42-yard field goal but it was wide left.

“He just hooked it a little bit,” noted Calley.

“We got the big play to start the game defensively to get the safety,” he mentioned. “We want to come out and start fast and get field position for our offense. We move the ball a little bit and we have a lost-yardage play.

Central, however, couldn’t muster a first down after Phillip Isom-Green and Walker Brown combined on a lost-yardage tackle on first down. A short punt gave Bryant possession 40 yards away from a score.

And this time, they got there. But it took some dramatics. Coleman dashed for 13 yards but, on the next play, Burks was sacked by Central safety Shumecio Ford. DeAmonte Terry got 6 of that back but, after an incomplete pass, the Hornets faced a fourth-and-11 at the Tigers 28. 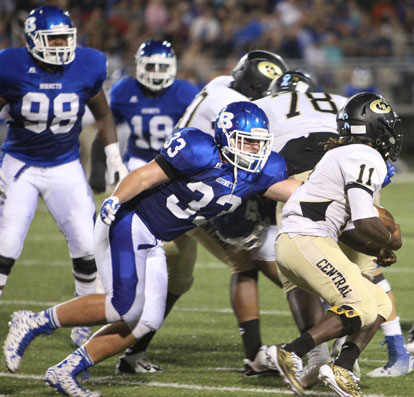 This time, Calley had his offense go for it and Burks, under pressure, laid out a deep throw down the middle that Orender ran under for a touchdown. Ray added an extra point and it was 9-0.

Central answered with its first substantive drive. They over came a 6-yard loss on a tackle by Cameron Murray with a 23-yard pass completion from McCarther to Mario Thompson. Moments later, a holding penalty pushed them back and they eventually ran out of downs at the Bryant 27. Hayden Knowles made a tackle for loss during the sequence. On fourth-down, Murray, the Hornets 6-3, 280-pound defensive end, batted down McCarther’s pass attempt before it reached the line of scrimmage.

Knowles and corner Pierce Finney led the Hornets with nine tackles each. Dixon was in on eight. He and Murray had two stops for losses and so did Finney. Dixon had two sacks as well.

Bryant responded with an eight-play, 73-yard scoring drive. Burks and Orender connected on completions of 18 and 24 yards along the way. The latter set up Coleman’s touchdown burst in which he went head-on into Central linebacker Antonio Brown at about the 8, bowling him over and keeping his balance to get into the end zone. 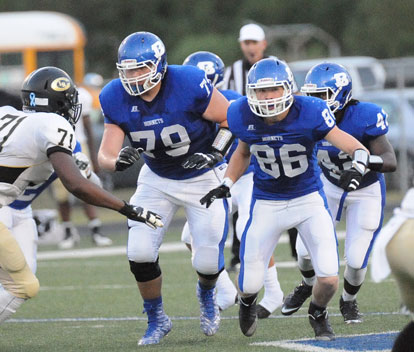 The Tigers went three-and-out and a 17-yard punt return by Jaelyn Jones had Bryant starting another possession in Central territory. It took seven plays to cover the 48 yards. Turner’s 12-yard burst started the drive. After Burks hit Orender for 12 yards to convert a fourth-and-5 from the 31, Turner slashed 17 yards to the 2, setting up his untouched touchdown run.

“We put points on the board,” Calley acknowledged. “We had back-to-back drives, good drives. We converted on fourth down. We made plays. We were able to do offensively what we hadn’t done, converting on certain situations, which is good.”

Peyton Robertson, Finney and Knowles combined on a lost-yardage play on Central’s next series, another three-and-out. But the Hornets fared little better as they exchanged punts. 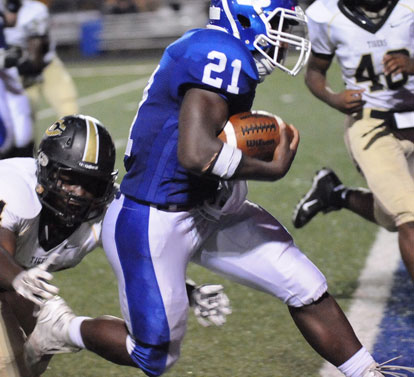 Getting the ball back with 3:37 to go in the half, the Tigers drove for their first score. It took just four plays to go 77 yards. Richard Hayes got loose on a 31-yard run then, a play later, the Tigers went to a “Wildcat” formation with running back Cavan Polite taking snaps. With 250-pound defensive lineman Malik Onwumere lined up at fullback along side Thompson and running behind the Tigers big offensive line (and away from Murray), a 31-yard touchdown run resulted. Jack Bryant added the extra point and it was 23-7 with 2:36 left in the half.

“(Starting middle linebacker) Devin Howard was out tonight so we had to play some different combinations,” Calley mentioned. “I felt like our d-line got tired at times. We’ve got to do a better job subbing for those guys and keep fresh bodies in there.”

The Hornets made a bid for an answering score before the half. Burks completed a 10-yard pass to Quinton Royal then a 16-yard strike to Orender. A 10-yard throw to Jordan Gentry and a 4-yard toss to Turner, got the Hornets to the Central 22. 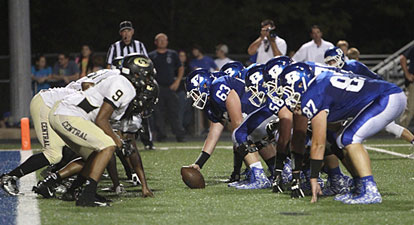 The Bryant offensive line digs in against Central’s defensive front moments before a touchdown. (Photo by Rick Nation)

On more than one of those passes, Burks was under pressure but he had evaded it until that moment when Central’s Jacob Buchanan sacked him back to the 30. On a third-and-14 pass, Burks was hit as he threw deep down the middle. The ball fluttered a bit and was intercepted by Ryan Dickerson.

On kickoffs, Central’s Bryant got height on his kicks, which he aimed across the field. To start the second half, the Hornets didn’t do a good job of getting under the kick and, with no fair catch call, the ball got loose. Central recovered at the Bryant 32.

The Tigers took advantage of the field position. Continued with the “Wildcat” alignment, Polite powered for 5 yards then broke a 26-yard touchdown run as Central closed within 23-14. 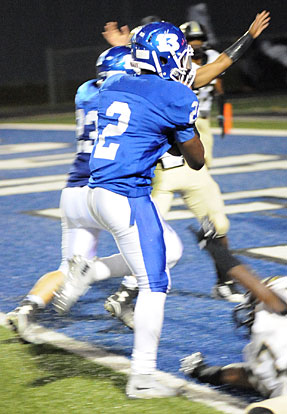 Savonte Turner (2) scores with an escort from H back Drew Alpe. (Photo by Kevin Nagle)

“That was new,” Calley said of the “Wildcat.” “We prepared for a power-I because a lot of times they’ll jump into a power-I. This was a form of the power-I, just direct snap to the runner, kind of like we did with (Chris) Rycraw several years ago.

“It’s effective,” he said. “They were doing a good job blocking. Their offensive line played their best game of the year by far. Coach (Scooter) Register always has them getting progressively better throughout the season. They’re usually playing well by playoff time.”

The Hornets had to punt but then so did the Tigers when Brown, Dixon, Marvin Moody, Devon Alpe and Finney took turns combining to stuff the “Wildcat” runs.

Punted back to their own 19, the Hornets drove in fits and starts to the Central 24. They overcame one lost-yardage play when Burks found Gentry for 8 yards and, on fourth down, tossed a 7-yard pass to Orender.

After another loss, two runs made it fourth-and-6 at the Tigers’ 24. Ray got the call and this time drilled the field goal and, with 2:54 left in the third quarter, the final score was on the board.

With Mario Waits combining with Knowles on a tackle for a loss on second down and Moody bringing down Polite for no gain on third, the Tigers were forced to punt again.

The Hornets attempted just one pass in the fourth quarter and it fell incomplete. Ray punted the ball away and the defense took the challenge. Central drove from its own 32 to the Bryant 31. But the next three plays were buried. Finney made a stop for a loss on Hayes then Devon Alpe combined with Dixon on a stop for a loss.

On third-and-20, the Tigers stuck with the “Wildcat” but Polite was grounded for no gain by Moody and Knowles.

The Tigers got the ball back after an exchange of punts and, with one last-ditch effort, made it to the Bryant 30. After a procedure penalty, Murray made two tackles behind the line of scrimmage and they turned it over on downs at the 36 with 1:14 to play.

Both teams start conference play against Class 6A foes. Central hosts Searcy and the Hornets travel to Russellville. 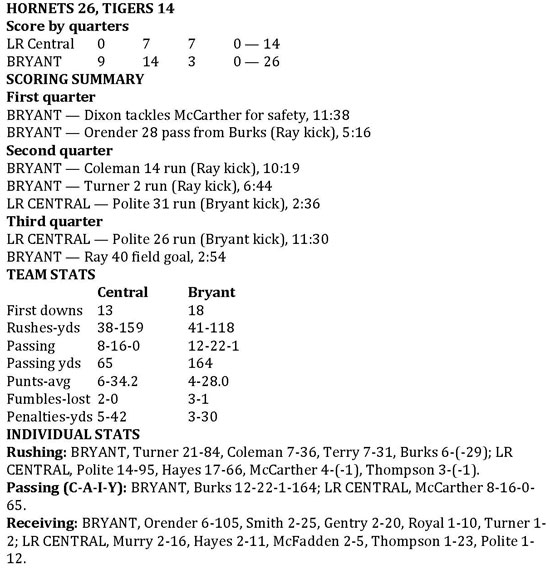