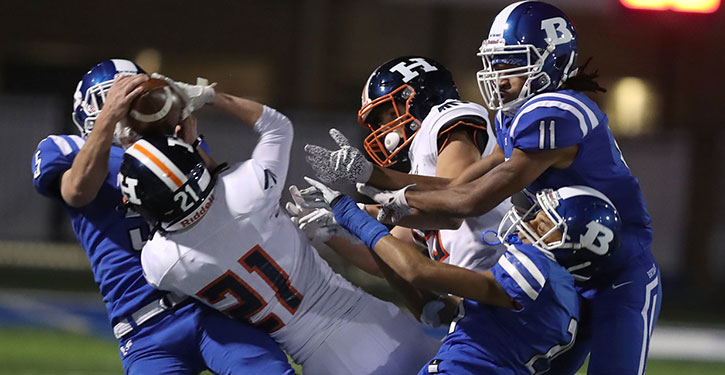 Bryant Hornets head coach Buck James would not say that his unbeaten Bryant Hornets team took the 1-9 Rogers Heritage War Eagles lightly Friday night. And it’s been a trademark of the Hornets since James got to Bryant that they just don’t normally have a letdown.

But, after emotional showdowns against North Little Rock and Conway the last two weeks, it seemed apparent that that’s just what happened to the Hornets on Friday night in the first round of the playoffs.

Oh, they won 34-7 to advance to the second round next Friday when they’ll host the Springdale Har-Ber Wildcats, a 49-28 winner over Fort Smith Northside. But the usual intensity and focus were not there, even after the War Eagles grabbed an early 7-0 lead.

The defense stiffened up some, but the War Eagles were able to play ball control, which helped keep the explosive Bryant offense on the sideline.

“I get that,” said James, who was celebrating a birthday on Friday. “That shouldn’t be our problem. It’s not about how many points we scored. It’s how we win the game. And winning the game — we did do that. I would like for us to do it in a better fashion. We didn’t play great, but we still held them to 7 points.”

The coach talked to his team, which is trying to win a third consecutive Class 7A championship, a little longer than usual after the game.

“I think we read the newspapers and reacted like a team that’s supposed to win by just showing up and that ain’t how it works,” the coach continued. “We won and I’m proud of that. There were a lot of good things. But I’m worried more about the things that are going to get us beat next week. That’s what we’ve got to fix.”

After falling behind, the Hornets scored on five of their six possessions in the first half to take a 31-7 lead into the break. James played his second and third team players in the second half.

“I think they’re just immature,” he said of his players. “I mean, they’re 16- to 18-year-old boys and they didn’t go out there and execute. You know, our twos and threes beat them 3-0 with the same group (of War Eagles) out there. They held them to less yardage and made more plays.

“If we learn something from this then we’re good,” the coach emphasized. “You know, it ain’t that we played bad, it’s just that we didn’t play good. That might be the worst we’ve played in the last five years. But (Heritage) had a lot to do with it too. They played good. They played hard. They never quit.”

The War Eagles, playing for the first time ever in the playoffs, got a thrill after their long trip from Rogers when they scored first. The first snap was a dive play to Elliot Villatoro who split the Bryant defense for a 45-yard run.

Two plays later, Heritage faced a third-and-10 at the 20. Sophomore quarterback Carter Hensley tossed the ball up toward the end zone where Jeb Brown was running a fade route. In a 50-50 ball, Brown wrestled the ball away from Bryant cornerback Kyle Knox for the touchdown.

The War Eagles never got close to scoring the rest of the half.

“They saw something about us that was undisciplined in the middle, so they trapped us,” James said of the opening play. “Then they threw the ball up to the same side of the field that everybody else throws it up to and we don’t make plays. We’ve got to start making plays. Even though we’re right there and the guy battles us for the ball, we’ve got to make plays. We didn’t stop it.

“But our second group stopped it,” he emphasized.

Defensively, it looked like Heritage employed the same kind of “rush-three, drop-eight” defense that the Arkansas Razorbacks used in wins over pass-heavy impatient offenses from Mississippi State and Ole Miss.

So, senior quarterback Austin Ledbetter took what they gave, going 7 of 10 in the first half, for just 86 yards and a touchdown.

And the Hornets, with three stellar running backs and a bruising offensive line (tackles Will Diggins and Brooks Edmonson, guards Parker Elswick and Jason Shifflet and center Jack Powell) kept it on the ground effectively, alternating Jamarien Bracey, Tanner Anderson and Xavier Foote a series at a time.

Bracey did much of the damage on the opening drive that started at the 48 after a strong kickoff return by Cory Nichols. Bracey had two 17-yard gallops, setting up his 3-yard TD plunge. Brock Funk, who was good on four extra points to go with his 27-yard field goal, made it 7-7.

Heritage picked up a pair of first downs in response but stalled near midfield. Defensive linemen Brandon Jones, Rodricho Martin and Christian Del Castillo combined to stop consecutive plays for no gain.

War Eagles’ punter River Gonzalez punted the Hornets back to the 8-yard line. But any hope for Heritage that they could stay with Bryant was squelched by the resulting 92-yard march to take the lead.

Anderson took his turn at running back and started the drive with a 16-yard burst. Along the way, Ledbetter hit short passes to Nichols and Hayden Schrader, whose 54 yards on four receptions in the game put him over 1,000 yards for the season. At 1,040, Schrader is 140 yards behind Bryant’s all-time leader in reception yardage Zach Cardinal.

Anderson caught a 14-yard pass and Ledbetter scrambled for 16 yards to the 6. A play later, Anderson plunged in from the 1.

“We ran the ball well,” said James. Bryant had 171 yards on the ground in the first half and finished with 238 yards for the game.

“We were a little impatient at times and got out in front of our blocking instead of setting our blocking up,” the coach mentioned. “I think we didn’t particularly pass block well. We didn’t get the ball down the field passing the ball, but they took that away. They played deep.

“But we scored on every possession except one,” he noted. “That’s what we do. I can’t gripe about it. All I’m trying to do is coach them out of what we can do better.”

Martin had a sack to force another Heritage punt after the War Eagles were backed up to their own 12 on the subsequent series. A short punt and a runback by Noah Davis gave Bryant a short field, 38 yards away from more points.

Ledbetter and Schrader combined on a 26-yard pass completion. Foote took it to the 7 and, from there, Ledbetter found Schrader at the 4. He cut up field and scored. Funk kicked it to 21-7.

In turn, Heritage drove from its own 23 to the Bryant 41 where, on a fourth-and-3, linebacker Hart Penfield pressured Hensley and cornerback LaQuav Brumfield broke up a pass and nearly intercepted it.

The only drive the Hornets didn’t cash in during the first half ensued. They reached the Heritage 34 then Ledbetter tried to thread the needle only to have Heritage linebacker Terrion Franklin intercept.

Another three-and-out followed and the Hornets got the ball right back at their own 45. On the first play from there, Anderson took it to the house and Bryant led 28-7 with 3:10 left in the half.

Running the play clock down and keeping the ball on the ground for the most part, the War Eagles ate up nearly all of the rest of the half. A couple of short passes helped keep the drive going until on a third-and-4 at the Bryant 43, Hensley threw into a crowd and Brumfield picked it off at the 26 and nearly returned it for a touchdown.

He was knocked out of bounds at the 10 with :03 showing on the clock. With the last play of the half, Funk booted a 27-yard field goal.

Jalun Davis made a strong runback of the second-half kickoff and the Hornets’ second offense took the field at the 47. Nichols completed a pass to Clay Curtis then scrambled for 7 yards. A 5-yard run by Chris Gannaway got to the 35 where the drive stalled, and the Hornets turned it over on downs with 10:11 left in the third quarter.

Heritage used nearly six minutes to drive to the Bryant 43 where safety Malachi Graham broke up a fourth-down pass.

Nichols and Curtis hooked up for 20 yards then Nichols ran for 19 to the Heritage 18. A mix-up on the routes at that point, resulted in an interception in the end zone by Cooper Bowman.

Jaylon Brown got a tackle for a loss and Heritage was unable to recover. They punted back to the Hornets.

Behind the running of Gannaway, the Hornets drove to the 10 where, on fourth-and-3, sophomore Stephen Fuller came in and drilled a 27-yard field goal. And the final score was on the board with just under 11 minutes left to play.

On the next series, Tyler Mosley made a stop for a loss and, on a fourth-and-11 at the Bryant 42, Hensley’s pass was picked off by Jaylon Brown.

Heritage got one more chance with 5:17 left and used up all but three seconds of that driving to the Bryant 42 before stalling out.