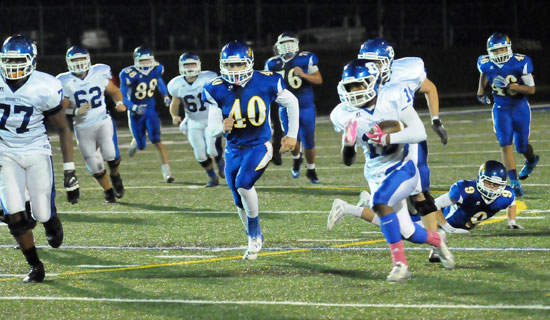 Hornets ease to 49-0 win at Sheridan

SHERIDAN — There are high school football fans around the state who think the Arkansas Activities Association should return to the days when the 32 largest schools were in one classification. The Bryant Hornets, one of the top 16 schools now in Class 7A, have supplied two quick examples over the last two Fridays of why that’s just not a good idea. Against Class 6A teams Little Rock J.A. Fair and Sheridan, the Hornets could’ve named the score as they overwhelmed both teams. With both games finishing with the Sportsmanship Rule (continuous running of the clock), the Hornets came away with a pair of 49-0 wins. 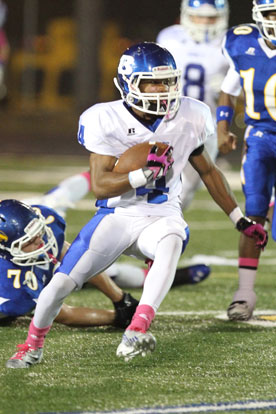 Along with El Dorado’s 44-34 win over Lake Hamilton, Benton’s 38-21 win over Texarkana, and Pine Bluff’s 35-8 win over Fair, the South Conference is now locked in a five-way tie for first (Bryant, Benton, Lake Hamilton, El Dorado and Pine Bluff are all 3-1) going into the final three weeks of the regular season. The Hornets will take on Texarkana for Homecoming next Friday then travel to Lake Hamilton before hosting El Dorado.

Their conference championship fate is in their own hands.

Since 1960, Bryant and Sheridan have faced off 48 times now and because of realignment next year, they won’t play again at least for two years and it could be a lot longer. Each school has now won 24 of those games. Not only have the Hornets won the last seven meetings dating back to 2000, they’ve outscored the Jackets 191-3 in the last four meetings.

On Friday, it was 35-0 at the half and the second half started with the mercy rule in effect. Brushawn caught two touchdown passes from Brandan Warner and ran for another. Devonte Howard ran for a score and turned screen pass into a 47-yard TD.

None of the Bryant starters played in the second half but the reserves on defense held Sheridan to one first down while junior quarterback Madison Schrader directed a pair of scoring drives, one capped off by Savonte Turner’s 5-yard run, the other Schrader completed with a scramble that turned into a 40-yard touchdown run. 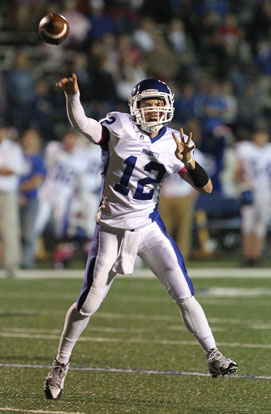 Brandan Warner was 8 of 11 passing for 138 yards and three touchdowns. (Photo by Rick Nation)

The Hornets amassed 498 yards of offense while limiting Sheridan to 67 on 40 snaps. Bryant defenders dropped Yellowjackets ball carriers for losses on 12 of those 40 snaps. Austin May, Noah Flores, Jarron Wade, Hunter Fugitt, Drew Tipton, Jake Johnson and Hunter Barksdale each was in on four tackles to lead the Hornets. Mark Nelson had an interception that he nearly returned for a touchdown.

The Hornets sputtered a little early. On the second play of the night, a mishandled snap resulted in a fumble that Sheridan’s Daniel Jones recovered at the Bryant 43.

Despite a loss on first down as linebacker Bryce Denker read an option pitch and buried Jackets’ running back McKenzie Jones for a loss, Sheridan drove to the Bryant 14. The first of eight penalties (for 85 yards) against the Hornets helped then a short pass from sophomore quarterback Dustin Reid to sophomore running back Brockton Brown picked up 5 to the 15.

On third down, however, Brown was stacked up for a one-yard pickup, setting up a fourth-and-1 at the 14. Brown got the call again but was unable to get back to the line of scrimmage as Wade, May and linebacker Tanner Rich blasted through to drop him for a loss.

The Hornets took over on downs but went three and out resulted in their lone punt of the game. But Sheridan was unable to take advantage again. McKenzie Jones was clobbered for a loss by May, Flores and Davis Nossaman and the Jackets were unable to recover. Brady Bibb came on for the first of his six punts and Bryant proceeded to score on its next seven possessions. 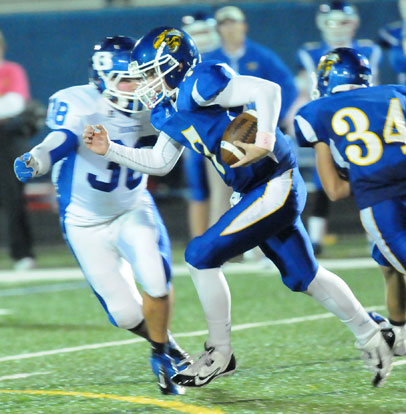 Though starting running back Brendan Young suffered and ankle injury and came out for the rest of the game, Kylon Boyle came through a pair of nice runs to help spur the drive. Warner completed a 9-yard pass to Austin Vail then a 15-yard strike to tight end Dalton Griesemer.

From midfield, Boyle slashed for 21 yards. He followed up with a 20-yard run but much of it was negated by a penalty for an illegal block. (While Bryant was flagged eight times, Sheridan went the whole game without a penalty.)

Running in at quarterback, Howard dashed 12 yards to the 11 then appeared to keep for a touchdown on the next snap only to have it called back due to a penalty. But the Hornets overcame it. On a third down at the 8, Warner and Hunter hooked up on the first touchdown pass to make it 7-0 with 2:23 left in the first quarter. 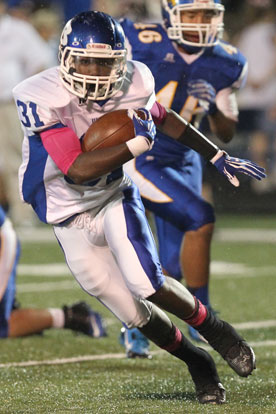 Lost-yardage tackles by Drew Tipton (a solo on another option pitch) and Flores, May and Mario Waits put Sheridan in a third-and-18 hole. Reid completed his first pass over the middle to D’Anthony Whitaker but as soon as he made the grab, Johnson made a bone-rattling hit to stop him in his tracks, four yards short of a first down.

Bibb punted the Hornets back to their own 32 but a 27-yard run by Howard on a reverse and a 19-yard gallop by Savonte Turner set the stage for Howard’s 7-yard touchdown run that, with Alex Denker’s extra point, made it 14-0 with 9:57 left in the half.

Sheridan picked up a first down on the subsequent possession as Jordan Smith hit consecutive passes of 7 yards to Brown and 3 to Dakota Hedden. But three plays later, Bibb was punting again.

Howard made a tremendous return of the kick but, again, a blocking penalty wiped out much of the 35-yard run. Instead of gaining possession at the Sheridan 26, the Hornets had it at the Jackets’ 47. But the Hornets were undeterred. Howard snatched Warner’s pass on the tunnel screen and wove his way to the end zone as the lead grew to 21-0.

The second quarter wound up being a 28-point burst for the Hornets. Nelson’s interception set up the next touchdown. It came after Sheridan had picked up a pair of first downs, both via Bryant penalties. From the Hornets’ 45, Reid tried to go deep and Nelson snatched the ball away from the intended receiver and returned it from the Bryant 25 to the Sheridan 35. But yet another flag left the Hornets with a first down at their own 47. 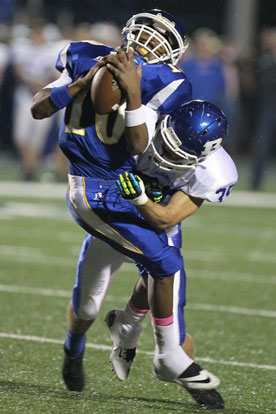 On the first snap, however, Hunter ripped 53-yards for the touchdown that made it 28-0 with 2:49 left in the half.

Sheridan went three-and-out and the Hornets regained possession at their own 46. Boyle dashed for 8 yards then consecutive completions from Warner to Evan Lee reached the 27. Two plays later, Warner dropped back to pass. Pressured initially, he rolled out to his right and, realizing that Hunter had separated himself deep down the field, fired a strike for the touchdown that produced the 35-0 lead with :11.1 showing on the clock.

Working against Bryant reserves on defense, Sheridan opened the second half with its last first down. Brown carried up the middle on five straight plays but, on a third-and-2 at the Sheridan 44, Reid kept and was stopped for a loss, forcing another fumble.

With the clock running, the Hornets ate up the final 6:54 of the third quarter and the first minute of the fourth with a 75-yard march in 13 plays. The drive featured Turner, who wound up as Bryant’s top rusher with 80 yards on 12 carries including the 5-yard scoring run. Along the way, Schrader completed all four of his passes, two to sophomore Gunnar Burks; another to junior Jacob Gorham; and one to junor tight end Jimbo Seale. 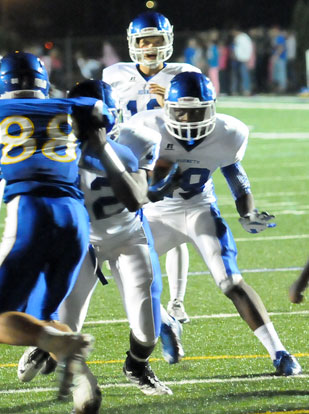 Kylon Boyle (19) looks to cut off of a block by Demaja Price on Sheridan’s Brett Davidson (88). (Photo by Kevin Nagle)

From their own 18, the Hornets tacked on a final score. Behind the running of Turner and Michael Martindale with Zach McConnell, Caleb Chaffin, Austin Fisher, Cole Fritchen and Zach Jackson providing the blocking, they reached the Sheridan 40. On a third-and-1, Schrader dropped back to pass rolled to his right and realized their was nothing between him and paydirt. He scored untouched to put the finishing touches on the rout with 3:44 left to play.

For good measure, Jaelyn Jones and Barksdale made tackles for losses on Sheridan’s final series. 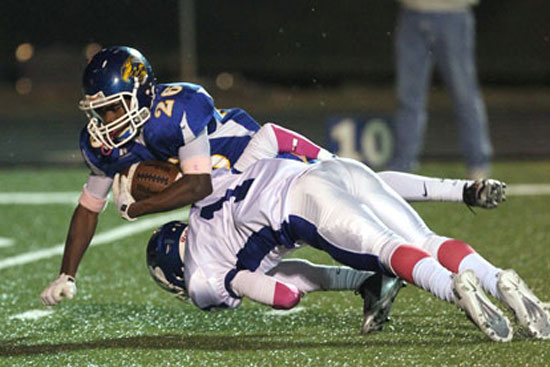