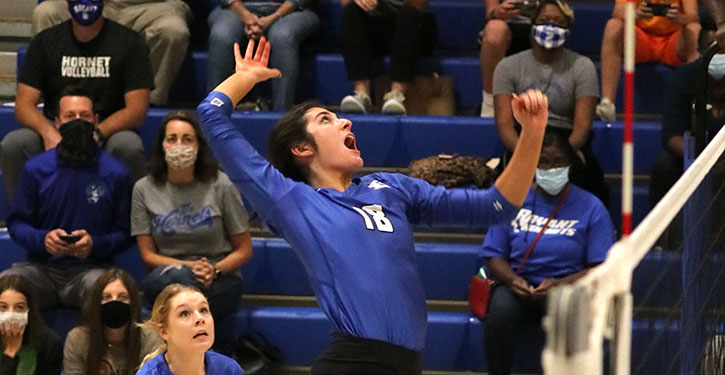 The Bryant Lady Hornets secured a bid to the Class 6A State Tournament in Cabot and advanced to challenge Fort Smith Northside for a higher seed tonight with a 25-20, 25-20, 25-20 sweep of the Little Rock Central Lady Tigers at the Hornets’ Nest Monday night.

Asked what she saw from her team that should carry over to the contest, she said, “What I’ve seen a lot of is I’ve had a lot of sophomores that I’ve had to put in and they’ve just stepped up and played. It makes me feel better that I don’t have to depend on my upperclassmen. I can really just shove anybody in there, just get them to settle down and play.”

Still, those upperclassmen led the way on Monday. Senior Sammie Jo Ferguson had 10 kills including six during the third set that initially helped the Lady Hornets stay close then surge into the lead.

Bryant was good on 90.4 percent of its serves with eight aces, led by Reynolds with three, all during a surge early in the second set. Carver had two aces with Ferguson, Jaiyah Jackson and Alyssa Hernandez with one apiece.

Defensively, libero Samantha Still came up with 22 digs. Jackson had 11. Carver and Hernandez added 10 each. Ferguson and Key had solo blocks.

“We were a little sluggish tonight but if we could play with that kind of confidence but a little bit better with consistency, I would definitely take that,” Back said.

The Lady Hornets played, however, like they weren’t ready to end their season, which is what would’ve happened had they lost.

“I’m glad that they do (want to keep playing),” the coach acknowledged. “We’ve had some pretty big ups and downs this year but it’s hopefully going to pay off now. I’ll take all those ups and downs all season long for a good finish.”

Little Rock Central, which had missed some conference games due to a bout of Covid-19, played like they didn’t want it to be over as well.

In the first set, after Bryant had built a 9-4 lead with Martin, Fleharty, Settle and Ferguson getting kills, the Lady Tigers rallied twice. Aces by Ferguson and Carver had Bryant up 11-5 but Central battled back to 12-9. Bryant surged again, sparked by kills from Fleharty and Carver, pushing the lead to 17-11. But, moments later, it was just 18-15.

But Lady Tiger errors on three consecutive volleys put Bryant back in control. Carver had another kill and Jackson served up her ace to make it 23-15 and, despite a series of errors that made it closer, the Lady Hornets closed out the win.

Bryant got off to a fast start in the second set. Ferguson had a kill and Reynolds came through with her three aces during a run that turned a 1-1 set into an 8-1 lead for the Lady Hornets.

But Central battled back to take a 15-14 lead. A kill by Fleharty got the Lady Hornets back even. With the score 16-16, a barrage at the net pushed the Lady Hornets back into position to win. Ferguson, Reynolds, Martin and Madelyn Hoskins came through with kills. The winning point came on Ferguson’s block.

Central held the upper hand early in the third set but never more that 5-2. Ferguson had three of her kills and Settle had one to keep Bryant within 4-5.

Errors by the Lady Tigers evened the set at 7 then Key’s kill gave the Lady Hornets their first lead of the game.

The last tie was 14-14. Central miscues and a kill by Key put Bryant ahead for good. But it was tight until Martin had consecutive kills then Reynolds added a pair. Ferguson’s 10th kill closed out the set and match.