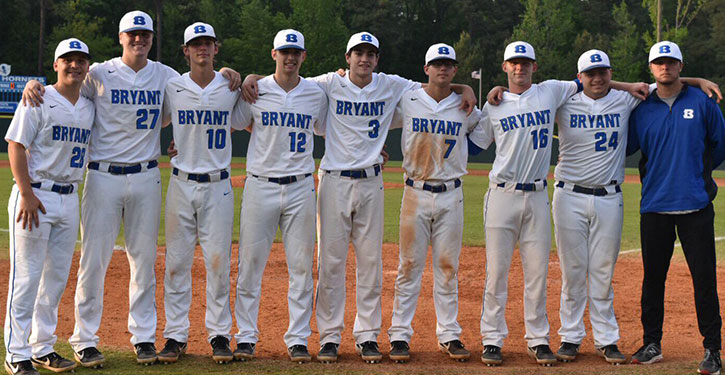 EDITOR’S NOTE: In this time of COVID-19, with no sports action, BryantDaily.com will be posting past stories of Bryant athletics either posted on BryantDaily.com (from 2009 to the present) or published in the Bryant Times (from 1998 to 2008).Photos courtesy of Kim Lester and Crissy McEntire

A pitcher’s duel nearly got too exciting at the end for the Bryant Hornets on Senior Night at Bryant High School Field.

The Hornets took a 3-0 lead into the seventh inning and a single by North Little Rock’s Bear Sparks and a two-out walk to Cody Bonds brought the potential tying run to the plate in Hayden Henson. Bryant closer Coby Greiner came within a strike of ending the game, but Henson lined one into the gap in left-center to drive in a run. And when the throw back to the infield got away, a second run scored.

“Where a base hit would score him,” noted Bryant head coach Travis Queck. “That’s how quick it turns.”

Greiner was able to get Jelani Willis to ground out to short to end the game but it was far too reminiscent of a big game in Queck’s life, his senior season at BHS with teammates Travis Wood, the future pro and state player of the year, and Justin Wells, a future Arkansas Razorback. The Hornets were stacked and coming off a State runner-up finish the previous season.

“It happened to us in 2005,” he recalled. “We were up 5-2 and Sylvan Hills strings together a couple of hits and the next thing we know, we’re supposed to win the State championship and we’re out in the semi’s.

“And that’s a sick feeling,” Queck emphasized. “I don’t want these guys to experience that. But they’ve got to understand that.”

This year’s Hornets, now 26-4, are scheduled to play at Conway on Friday. They’ll open the 6A State Tournament in Rogers next week as the number one seed.

“We’ve just got to keep plugging away,” he said. “We’re hitting way too many flyballs. I don’t know if we were trying to take advantage of this wind or who we think we are, power hitters or whatever. You know, it’s not working. We’ve got to understand we’ve got to stick to our knittin’ with a blue-collar mindset.”

Fortunately, Hornets sophomore Austin Ledbetter faced just one over the minimum in the first five innings, allowing a lone single to Alex Cauley to lead off the fourth. He walked one (erased in a doubleplay) and struck out seven.

“Right now, we’ve got to find our way at the dish,” he reiterated. “We’ve got to find something or we’re going to be in trouble. Yeah, we can rely on pitching and defense, but it can turn so fast.”

The Charging Wildcats, fighting to get as high a seed as they can, are sitting in fifth place but Little Rock Central is just a game behind them with one to play. North Little Rock is at second-place Cabot on Friday. Central plays at third-place Catholic.

The Hornets took the lead in the third inning when Chambers and Ledbetter belted consecutive doubles. With one out, Peyton Dillon hit a grounder to Henson at third. He gave a brief glance back at Lawson Speer, the courtesy runner for Ledbetter. Speer took a step back towards second but as soon as the throw was away, took off for third.

North Little Rock first baseman Luke Rice got the out then returned the throw to Henson as Speer went into his slide. The ball got away from Henson and Speer scrambled to his feet and score.

Ledbetter had, meanwhile given up only a one-out walk to Sparks in the second. Charlie Warren followed with a line drive to shortstop Zion Collins, who snagged it and fired to first to double off Sparks.

In the fourth, Cauley hit a soft liner to left for a single. Deshaun Cordova sacrificed him to second but Ledbetter fanned Rice and got Shahan to pop out to Noah Davis at second.

Shahan set down the Hornets in order, but Ledbetter returned the favor in the top of the fifth.

Chambers’ third hit was a single to right-center to open the bottom of the fifth. He swiped second and scored on Ledbetter’s single to left-center. An out later, Speer was thrown out trying to steal second just before Dillon doubled.

“We would’ve scored another run there if I hadn’t tried to be aggressive right there,” Queck said.

Greiner relieved in the sixth and retired the first two before Cauley blooped a single down the right-field line. Cordova walked then Rice made a bid at gapper to right-center only to have Gage Stark sprint into the gap from center and haul it in to end the inning.

Greiner held on to earn his sixth save of the season as Ledbetter improved to 6-0.