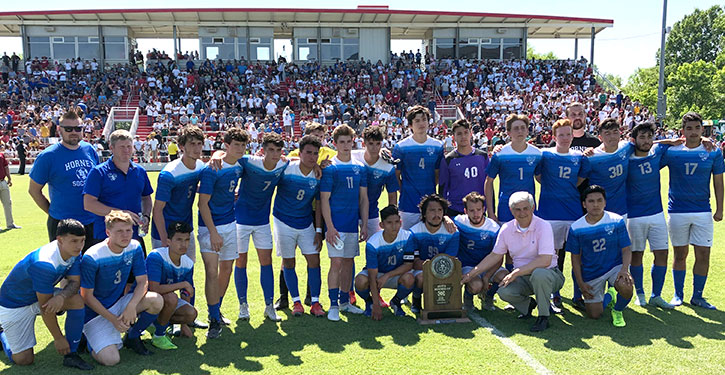 The Hornets can now expect rather than hope. They took their first step towards becoming what Springdale is on Friday. Unfortunately, the fast forwards for the Bulldogs proved difficult to stop. Springdale took a 1-0 lead in the first half and made it hold up until late in the contest when they added two more goals, winning the school’s third State championship in the last 16 years.

The Hornets will be better for the experience, and the seniors will always be remembered as the guys that led the team to that first championship game.

“In the end, the boys have nothing to hang their heads about,” said Hornets head coach Richard Friday. “We had probably five or six opportunities that we could’ve put on goal.”

A lot of the first half was played on Springdale’s end but Bryant did a remarkable job of keeping the game scoreless most of the way, fending off a whopping 18 shots on goal.

But number 19, off a deflection, found the back of the net. Irvin Sotero, who was named the MVP of the game, scored it.

In fact, Sotero initially thought he’d been cited for offsides before the officials conferred and allowed the goal.

The Hornets had five shots on goal in the first half. The first came 11 minutes in. Brandon Delgadillo’s shot was high. At 25:40, Grant Jacuzzi was high on a penalty kick. About 34 minutes in, Henry Terry headed one toward the goal, but it went wide left. Another shot by Delgadillo at 2:28 left, was saved by Abram Cordero.

“If we had taken advantage of our opportunities, we could’ve come in with two or three goals in the first half,” Friday said.

Both teams had chances in the second half but, again, Springdale’s attack kept the Hornets busy contending with the speed of the Bulldogs’ forwards, particularly Sotero, Jose Vega and Rene Recinos.

“We hadn’t played a team like that all season,” Friday acknowledged. “That’s one of the things I’ll probably have to do as a program is come up here more and playing this competition more early on in the season to get into the groove of things. Unfortunately, the way things go, non-conference, you’ve got to get them done early and you’ve got a whole season to progress out of it.”

Martin Ramirez had a couple of chances for the Hornets including one right in front of the goal. The close-range shot was saved by Cordero as they wound up in a tangle. Later, Ramirez dribbled into the box as Cordero came out. The two collided and the Springdale keeper had to come out of the game for a while.

“Realistically, it was a 1-0 game off a deflection in the first half and it didn’t turn into a 3-0 game until I just started gambling and throwing players forward, trying to get the tie,” Friday observed. “In the end, 1-0 is the same as 2-0 or 3-0. If you’re going to lose, you might as well throw the dice, gamble and go for it.”

Danny Maldonado scored off an assist from Recinos in the 77thminute then Recinos got the third one with :50 left.

“All-in-all, I’m not disappointed in the kids,” Friday asserted. “I think the kids worked hard and they did what they needed to do.

“It’s one of those things,” he added. “You have to learn. It would’ve been a miracle season to step in and win this one. But they set a standard for the next group to come in.

“Next year, we’ll retool. We’re losing some players, but I think we can step players in and compete and do the same thing next year. It’s a pretty good group of seniors but I think the under-classmen coming up can step in and go and do it.”