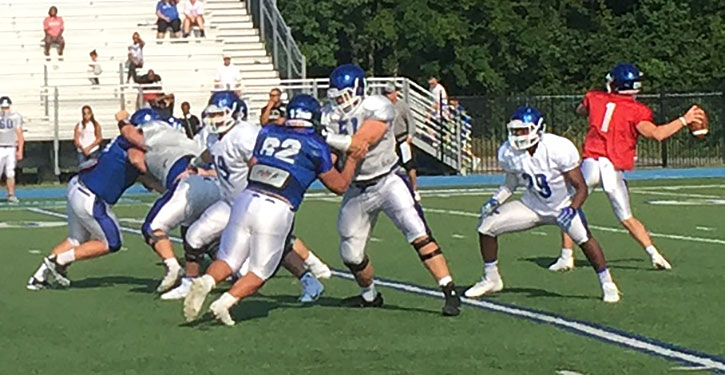 Hornets get in some contact, reps at first fall scrimmage Saturday

You don’t want to be playing your best football three weeks before the start of the season so it’s no surprise that the Bryant Hornets’ coaches had mixed reviews for the team as it scrimmaged for just over an hour on Saturday morning, getting a jump on full-contact pad work.

“It’s a start,” acknowledged head coach Buck James. “And I still told them that I thought we’re ahead of where we were last year at this time. But it’s not where I expected us to be.

“There’s things we’ve got to look at on film and evaluate,” he added. “But we really sort of stole a day today. We had really quick whistles. We warned our kids about staying up and stuff and it took a little of our aggression away, maybe. But that’s okay. We got through this without any kind of injuries or anything. And it gives us a day up on a lot of people who didn’t do anything today. Their first day of pads will be on Monday. So, we got a chance to evaluate it and get better going into next Friday’s scrimmage.”

“I thought our defense was better than our offense today and that’s the way it’s supposed to be,” James asserted. “It hadn’t been that way all week so it tells me our defense has sort of been bird-doggin’ us in practice.”

Defensive coordinator Darrell Burnett commented, “It went pretty good. The 1’s and 2’s — we did a lot of different packages. We tried to treat it like a game day, see how they react, see if they can think on their own. For the most part, they did really good. I wasn’t pleased with some of the d-end play, letting the quarterback get outside.

“Our 3’s and 4’s, we put them in some tough situations,” he continued. “We didn’t go with one call. We treated it like a game for them too. So, we were switching calls, switching fronts, making them think and it was thinking that was a little too fast for them. But that comes with reps, comes with time.”

The defense was without four projected starters.

“We’re moving some guys around and they know it, just because they’re students of the game,” Burnett related. ““I like the way we challenged the receivers. We did better at ball-get-off.

“It’s good but it ain’t good enough,” he concluded. “We want to be great.”

Offensive coordinator Kirk Bock said, “I thought our offensive line did a pretty good job. Skill people? We need to do better. We need to make better decisions, run routes a little bit harder. The game really sped up for those guys. Darrell had some guys out, we had three guys out. So, it kind of slowed us down just a little bit.

“I think we’re light years beyond where we were this time last year,” he acknowledged. “We’ve just got to clean some things up.”

If the Hornets start at a better point and progress as much as last year’s squad did, good things will be in store.

“I think we will,” Bock said. “The kids understand what to do for the most part. But it’s a new concept. Now we have receivers reading d-backs and it gets going really fast. You’ve got to really be intelligent to understand the scheme. And we’ll get there. We just need to see it more and more.”

James noted, “We put our offense in some bad situations on purpose. And we tried the throw it more than we ran it and our defense pinned their ears back a little bit. But I thought when we wanted to run the football we did good.

“We’ve just got to get better at getting out of our routes,” he added. “Our receivers have got to play at a higher level for us to be able to throw the football. We’ve got to be able to get open but, in all fairness to our offense, our secondary is pretty good and there’s a lot of experience back there. We don’t have a lot of experience at receiver. I think that was the biggest difference.”

“A lot better than what we did last year, which tells me a little bit about our d-line probably needing to pick that up,” he mentioned.

“I’m a little disappointed in our conditioning,” he said. “I thought that we would handle it a little bit better. But we were huffing and puffing a little bit. That tells me we’ve got to do a little bit better job there. And, in all fairness, this is the sixth day of practice in a row in pads. That has a lot to do with it too.”

The Hornets will practice Monday morning then in the evenings on Tuesday, Wednesday and Thursday before a final a.m. workout on Friday leading into the start of school on Aug. 14.