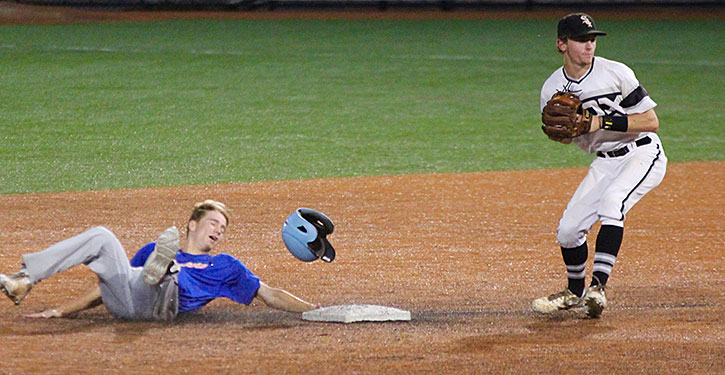 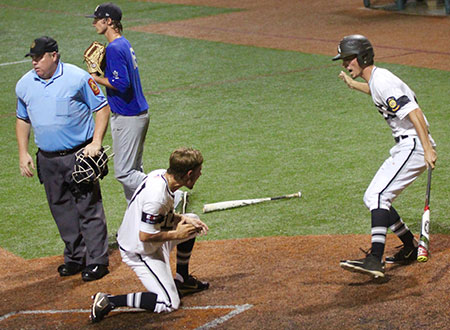 NEW ORLEANS — Dayne Bowerman, who had gone 0 for 3 to that point, snuck a groundball past the diving attempt at a stop by third baseman Scott Schmidt, driving in the winning run in the bottom of the 10th as the Ada Braves, champions of Oklahoma, slipped past the Arkansas champion Bryant Black Sox, 5-4, in the winners’ bracket finals of the 2017 Senior American Legion Mid-South Regional at John Ryan Stadium on Friday night.

Both teams will play again on Saturday since the bracket used at the tourney is the obsolete College World Series bracket. Bryant will face a rematch against Columbia, Tenn., in an elimination battle at 12:30 p.m. The Sox outlasted the Tennessee champion, 9-6, to open the tournament on Wednesday. Columbia ousted Jefferson City, Mo., 4-3 on Friday. 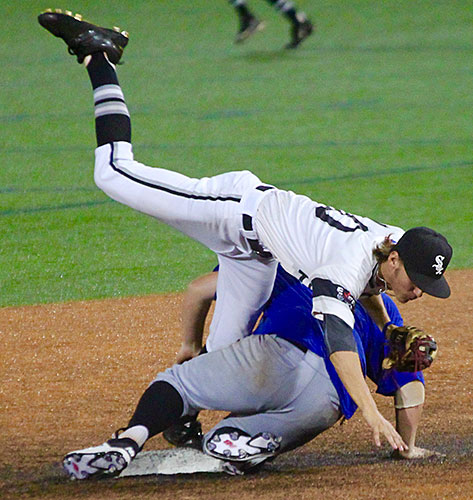 Ada will come back to take on the LaPlace Pedal Valve Cardinals of Desrehan, the Louisiana champion at 4:30 p.m., Saturday. Pedal Valve knocked out Mississippi champion from Amory Bay, 2-0, on Friday.

The Regional champion advances to the American Legion World Series in Shelby, N.C.

The Sox, who had come from behind in the win over Columbia and a 4-2 victory over LaPlace, found themselves in that position again on Friday. They rallied from a 4-1 deficit after two innings to tie the game at 4 through seven frames. 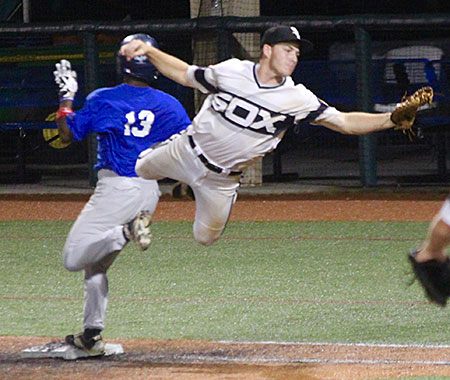 Through nine innings, the Sox had out-hit the Braves, 11 to 6, but they’d stranded 14 base-runners.

In the 10th, Seth Tucker’s two-out double gave Bryant a chance in the top half but he became the 15th runner stranded.

In the bottom of the inning, Ty Elliott led off with a single to left for Ada. Ethan Jackson got a sacrifice bunt down and Tucker, the fourth Bryant pitcher, pounced on it with time to get a force at second. But he had to rush the throw a bit as second baseman Coby Greiner was a little late covering the bag. Elliott slid in safely and Jackson crossed first.

Mekhi Edwards’ single to left loaded the bases then Bowerman, on a 1-1 pitch, came through with the game-winner. 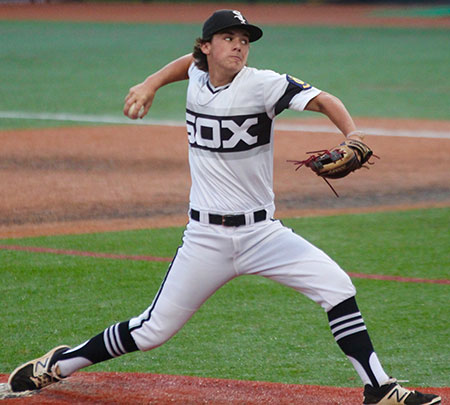 Edwards had three hits for the Braves. Cole Broughton had two as he knocked in a pair.

For Bryant, Alex Shurtleff and Scott Schmidt finished with three hits. Schmidt drove in two including the game-tying run in the top of the seventh.

The Oklahoma team grabbed a 2-0 lead in the first. Joshua Lewis walked and, with one out, Bowerman cracked a homer down the left-field line.

Bryant starter Myers Buck came back to retire Trejan Blue on a grounder to short. He struck out Takota Frank to end the inning.

The Sox got one of those runs back in the top of the second. Shurtleff drilled a double to the gap in left-center. Though he was tagged out trying to go to third on a grounder by Jake Wright, Aaron Orender drew a walk and Schmidt lashed a single up the middle to make it 2-1. 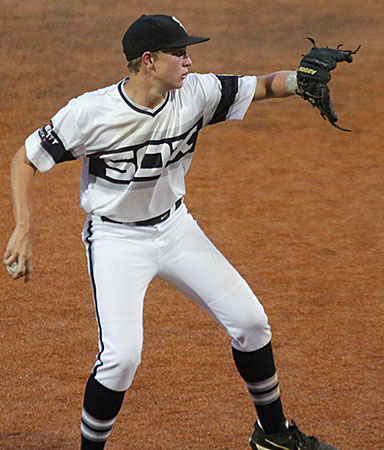 Two were stranded, however, and, in the bottom of the inning, Ada scored two more. Elliott walked, Jackson singled to right and Edwards loaded the bases with a knock up the middle. Bowerman delivered a sacrifice fly. Then an error allowed Jackson to score.

The Sox had an uncharacteristic four miscues in the game.

Frank, the Ada starter, kept it 4-1 through four innings. Dylan Hurt and Shurtleff had two-out singles in the third but were left aboard. In the fourth, Frank pitched around a two-out walk to Greiner.

Buck settled in as well and blanked the Braves as he pitched five innings. He worked around a pair of one-out walks in the bottom of the third then overcame a one-out double in the fourth by Lewis who tried to tag and go to third on a fly to center by Darian Luper but was called out for leaving the bag too soon. 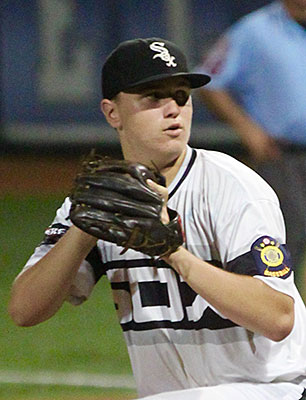 The Sox began to whittle on the lead in the top of the fifth. Jake East walked and, with one out, scored on Hurt’s double down the left-field line. An error allowed Hurt to reach third but Frank limited the damage by striking out the next two.

In the sixth, however, Schmidt reached on a one-out boot by Frank then Greiner drew a walk. Allen came through with a lined single to center to make it 4-3.

That ended the moundwork of Frank. Luper relieved with Greiner at second and Allen at first. He got East to tap into a force at second as Greiner moved to third. Tucker drew a walk to load the bases for Hurt, who made a bid for a big hit only to have his line drive speared on a leaping catch by Broughton at second.

Boston Heil relieved for Bryant in the bottom of the inning and retired the side around a one-out error. He fanned Bowerman and got Lewis to bounce out to East at short.

Shurtleff smacked a single to left on a 3-2 pitch to open the top of the seventh. Wright drilled a single to center and, with one out, Schmidt came through in the clutch, lining a single to right-center. Shurtleff scored and, on a throw that missed the cut-off man, Wright went to third and Schmidt hustled into second. 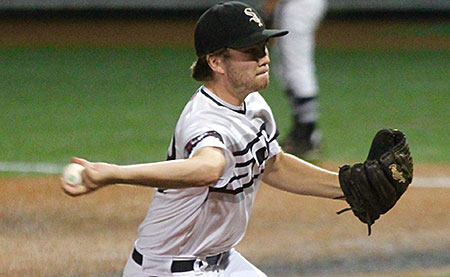 With two down, Allen came to the plate but was struck by a 1-1 delivery, loading the bases. But Luper and the Braves escaped with the game tied when he got East on a grounder to second.

Heil hit Luper to start the bottom of the inning. On a roller to Schmidt at third, Luper beat the throw to second on an attempt at a force. With one out, they pulled off a double steal. But Heil got Frank to fly out to Greiner in left and Elliott to bounce out to East at short to end the threat.

Bryant was retired in order in the eighth. Heil then struck out Jackson to start the bottom of the inning then, in order to preserve pitches and keep Heil available for Sunday, Will McEntire was called in to relieve. Despite a single by Edwards and a walk to Lewis, McEntire worked through the inning to keep it tied.

The Sox’ ninth was highlighted by Schmidt’s third hit, a two-out single but he was stranded. Broughton led off the home half with a base hit but, on a grounder to Tucker at second, the Sox turned a double play. Frank flied out to Allen and the game went to extra innings. 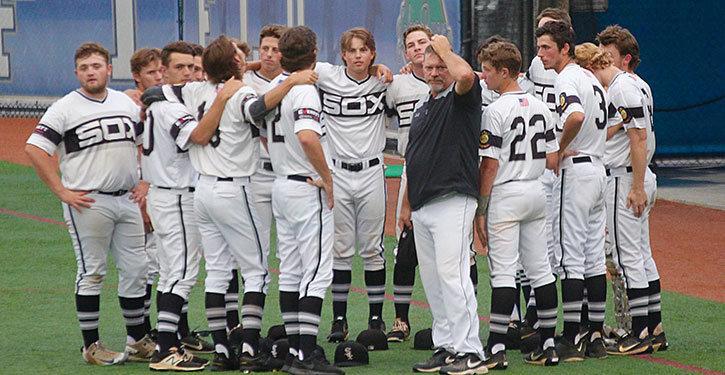