Hornets grind out a nail-biter at Cabot

CABOT — With his team trailing 33-32 with less than a minute to play, Bryant junior Tyler Simmons[more] drove around a Cabot Panthers defender, got into the lane, made a spin move as help-defense arrived and drained a lean-in jumper while being fouled with :51.9 showing. After a timeout, he completed the clutch three-point play and, with C.J. Rainey adding a late free throw, Bryant’s Hornets survived a determined effort from Cabot with a 36-33 win. 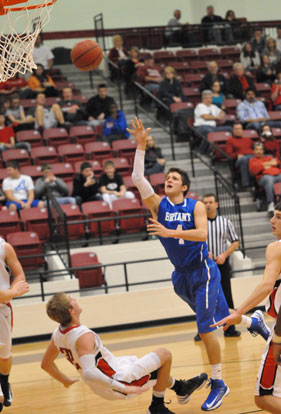 The intensity was indicative of the rivalry, which developed over the last few years as the two schools battled in the Central Conference. Now, Cabot’s in the East and Bryant’s in the South but Friday’s game seemed like old times.

Cabot used a patient, screen-and-cut passing game on offense and an active match-up zone on defense to frustrate the Hornets who, nonetheless, led most of the game. As late as 6:38 left in the game, Bryant held a 30-24 advantage.

As the score indicates, Cabot’s approach shortened the game and gave the Panthers a chance at the end and they nearly pulled off the upset.

“It was another grinder,” said Bryant head coach Mike Abrahamson. “That was like Tuesday’s game against Russellville times 10. Again, it’s to Cabot’s credit. They’re really tough defensively. They struggle offensively a little bit but they’re so tough defensively and they’re so well-coached that I knew it was going to be tough. I knew we weren’t going to come in here and run over them. I knew they were capable of beating us and they almost did. It was not unexpected but it was stressful.”

A pull-up jumper in the lane by Kyle Theilemier started Cabot’s rally. Bryant missed two chances to answer and the Panthers’ point guard Bryan Shrum drove for a layup to cut the margin to 2.

Abrahamson called a timeout with 4:55 left then deployed his team in a spread offense, reminiscent of the one they used for more than a quarter of their 54-43 win over Russellville on Tuesday. It figured the coach wanted to see if he could get Panthers’ coach Jerry Bridges to pull his team out of the zone and play man. Also, Cabot had committed just two team fouls to that point, a far cry from putting the Hornets in the bonus and shooting on common fouls.

They whittled nearly two minutes off the clock and got the Panthers to foul four more times, a foul short of the bonus. A turnover occurred with 2:59 left when Simmons, trapped on the wing, stepped on the sideline as he escaped. 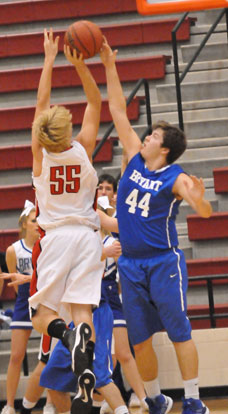 At the other end, Cabot’s Clayton Vaught and Bryant’s Greyson Giles got tangled up away from the ball and both were cited for technical fouls. The Panthers retained possession and, with 2:47 left, cashed in the opportunity when Jake Ferguson drilled a 3-pointer to give them their first lead since early in the second quarter.

With the crowd and the Panthers fired up over the technicals and the sudden lead, Rainey fed Zach Cambron inside and he was fouled. He hit the second free throw to tied the game 31-31 with 2:35 to go.

In turn, Shrum beat the Bryant press and barreled into the lane and appeared to score. But the basket was wiped out as Shrum ran over Bryant’s Luke Rayburn who had hustled back to get position.

Again, the Hornets spread the floor to eat time and perhaps open up a lane to the hoop. Cambron took a pass on the left wing right in front of the Bryant bench and, with a defender leaning on him, turned to try to clear the ball. But his elbows were high and he clipped the defender on the chin and was called for an offensive foul. And when the official felt he’d put a little too much force on the ball as he passed it to him, another technical was issued. The result was a fifth foul on Cambron.

Theilemier converted both free throws to give his team a 33-31 lead.
On the subsequent possession following a Bryant timeout, Cabot’s Michael Smith was fouled with 1:54 to go only to have a lane violation negate the free throw.

Bryant was awarded the ball, trailing by 2.
K.J. Hill, who led all scorers with 12 points, converted a pair of free throws with 1:43 to go, trimming the Cabot lead to 1. Shrum was fouled with 1:17 left. With the double bonus in effect, he got two shots but proceeded to miss them both.

That led to the clutch three-point play by Simmons, who had been limited to just one basket to that point in the game. 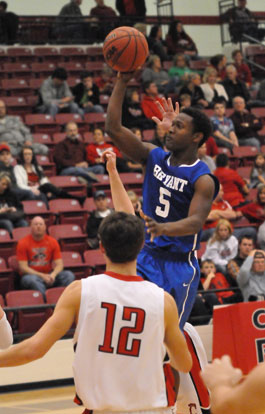 Now it was the Panthers who were down by 2 as they worked patiently for a good look at a tying or go-ahead bucket. Brett Frazier launched a 3 as the clock dwindled down to :10. The carom was contested by Cabot’s Ryan Stafford and Rainey and was ruled out of bounds off the former.

Abrahamson took a timeout with :08.5 showing. Cabot jumped into a press and Rainey was forced to call another timeout when he couldn’t get the ball in immediately. On the second try, he got it to Hill who gave it back and Rainey was fouled with :06 to go.

He converted the first shot then Cabot took a timeout. A second free throw would’ve put the game out of reach but it rimmed out and the Panthers called time with :05.4 to go to try to set up a last-second shot. Shrum got to the 3-point line but had to rush his shot and it fell harmlessly away as the Hornets held on.

Giles had 9 points for Bryant, all on 3's. Simmons and Cambron finished with 5 each. Rayburn and Brian Reed added 2 apiece. The final free throw was Rainey’s only point.

Smith paced Cabot with 10 points. Shrum and Theilemier added 6 each.

“I’m proud of Luke Rayburn taking that charge in the fourth quarter,” Abrahamson stated. “I’m proud of Tyler Simmons, who didn’t have a good game, whose confidence was really down, stepping up and making that shot in the lane to get us the lead back then making the free throw. I’m proud of the guys handling the ball there at the end. Really, I’m proud of everybody but guys stepping up is what we needed at that time.

“Good teams win fast-paced games, they win slow-paced games,” he added. “They win games that are amusing to the fans and they win grinders. And we’ve been able to do that so far this year for the most part. So I was proud of them. With everything going on, with some calls not going the way we might’ve thought they should go, to foul trouble, technicals, just things happening, they just kept responding.

“We can’t have the technicals,” the coach asserted. “I don’t care what happens. I don’t care if they get their nose broken. We’ve got to keep our composure. I didn’t see what happened in either instance but we can’t have it happen. We basically were about to give the game away. It was hanging in the balance at the time. I was disappointed in that. They should know better as a junior and a senior. You just can’t have that happen ever again.”

Cabot led 8-7 at the end of the first quarter. It was 12-9 early in the second when Giles canned back-to-back triples to put the Hornets ahead. In response, Theilemeir and Frazier scored to make it 16-15. Hill tied it with a free throw after driving into the teeth of the Cabot zone. He would follow up with a three-point play that put the Hornets ahead.

When Reed and Rayburn combined to force a turnover, Simmons fed Reed for a layup with :02.5 left in the half to make it 21-16.

When Rayburn hit a free throw early in the third quarter, it produced the largest lead of the night, 23-16. Cabot cut it to 26-22 going into the fourth quarter. Stafford's baseline jumper made it a 2-point game. A running jumper by Hill and a layup by Simmons pushed it back to 30-24, setting up the dramatic finish.

Now 8-1 on the season, the Hornets will conclude the pre-Christmas schedule next Friday when they travel to Texas High in Texarkana.