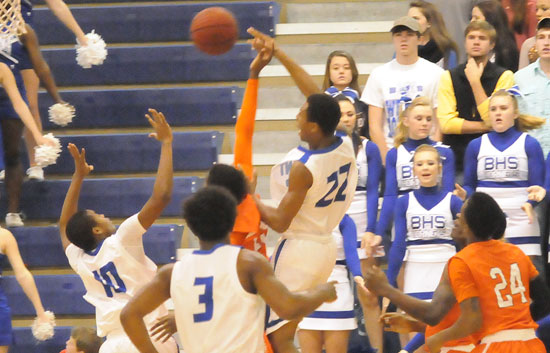 Hornets head into holiday break on a high note

After losing back-to-back heartbreakers at a tournament in Conway last week, it had to feel good for the Bryant Hornets to win a close one. With the Christmas break in their sites (among other distractions), the Hornets focused up on the high-flying Texas High Tigers of Texarkana, Texas and forged a 67-65 win.

C.J. Rainey goes up for a shot. (Photo by Kevin Nagle)

Senior C.J. Rainey, despite being shut down in the second quarter by a variety of defenses including a diamond-and-one, would up with 23 points anyway including a 6-for-6 performance at the free-throw line in the fourth quarter. The two he knocked down with :18.9 to go, sealed the victory, making it a two-possession game that withstood a last-second basket by the Tigers.

The game started late after the Texarkana team was late getting to the Bryant gym due to traffic. Then the junior varsity game went to overtime before Bryant won.

To top that off, due to the warm temperatures and the rainy weather — and, perhaps, the fact that the gym is 45 years old (built and dedicated in 1968 when Bryant was a Class 3A school, not a Class 7A entry) — condensation on the court resulted in a variety of delays including a 10- or 15-minute interruption late in the first quarter.

The Hornets improved to 3-4 on the season going into their break. They’re set to return to action on Thursday, Dec. 26, at 2:30 p.m., against Springdale in the annual Coke Classic in Fort Smith. (Texas High will also be in the field of eight at the tourney, hosted by Fort Smith Northside at UA-Fort Smith’s Stubblefield Center.)

The Tigers fell to 4-3 with the loss.

“They scored 100 points on Tuesday against Liberty-Eylau down there,” noted Hornets coach Mike Abrahamson. “They won it 100-66. You see that and it scares you. They’re very athletic and I could see how they scored 100 if the other team tried to play up and down with them, and that’s what happened. 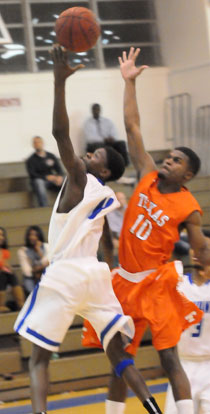 Kevin Hunt (11) beats a Texarkana player to the hoop. (Photo by Kevin Nagle)

“So all we could do was what we could do and that’s prepare the best we can,” he related. “They added a few wrinkles that I didn’t see in the game I scouted. We just tried to adjust on the fly.

“I just feel good for the kids,” the coach stated. “They’ve been working so hard and we’ve lost a couple of close ones and, you know, it’s harder for them to see that we’re getting better when we’re not winning. I feel really good for them. They deserve it. They’re really doing all they can and giving all they can.”

As often is the case in basketball, it was a game of runs. The key one turned out to be Bryant outscoring Texarkana 21-8 in the second quarter. That turned a 23-16 deficit at the end of the first quarter into a 37-31 halftime lead.

Rainey had scored 9 points in the first quarter while Texas High was paced by Jamal Ray with 8 (on his way to a game-high 25 points). The Tigers scorched the nets, going 8 of 13 from the field and 4 of 5 from the free-throw line. They also knocked down 3 of 7 shots from 3-point range. As it turned out, they would manage just one more triple the rest of the game, finishing 4 of 25 beyond the arc.

So, to start the second quarter, Texas High deployed in the diamond-and-one defense — a zone with a man on Rainey at all times, trying to deny him the ball.

“We knew, at some point, someone was going to try to deny C.J. or Grayson or both,” Abrahamson said. “They threw a few wrinkles at us when they were denying C.J., so we went to some of our stuff where he was going to be a screen-setter or set us up in other ways. And he did that and he impacted the game greatly. We actually got the lead when that happened. We didn’t have the lead before they did that and we got the lead through that execution.”

Indeed, Hunt opened the quarter with a 3-pointer and, moments later, Martin flushed one to make it 23-22. Off a Texas High turnover, Rainey fed Hunt for a layup and the lead. 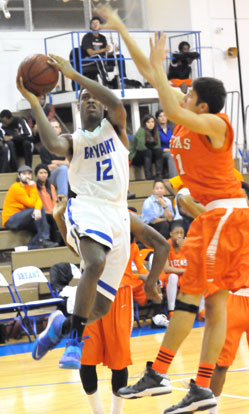 Cedarrian Crosby drives to the rim past a Texas High defender. (Photo by Kevin Nagle)

A driving jumper by Keilon Bunn put the Tigers back on top briefly but Crosby sliced to the rack to get the Hornets back on top. Martin got another 3 to splash and, after Crosby absorbed a charge on a drive to the hoop by Texas High’s Success Blevins, Buchanan took a feed from Giles and scored despite being fouled. That had the Hornets up 31-25 with 4:25 left in the third quarter.

“C.J.’s matured so much — they all have — Cedarrian and Grayson,” said Abrahamson of his veteran players. “That’s why you coach. You want to see that growth and you want to see people get better and mature and grow. They all have. To see C.J. — he’s always been so fixated on points — to see him impact the game in other ways means a lot to me.”

Texarkana cut the lead back to 2 twice. A stickback by Ray after Martin had scored on an eye-popping drive, spin and jay made it 33-31. The Tigers called a timeout but when play resumed, it was the Hornets who came back to life. Desmond Duckworth fed Buchanan for a layup and Hunt added a pair of free throws in the closing seconds to set the halftime count.

Malik Gailes and Ray scored the first two hoops of the second half to cut it back to 2 and it was nip and tuck for a while after that. Back-to-back buckets by Crosby and Rainey pushed it back to 45-39 going into the final two minutes of the third quarter but Texas High, benefiting from a disputed basket at the buzzer trailed just 45-44 going into the fourth quarter.

And the Tigers, sparked by their half-court trap, eventually pulled ahead 56-55 with 3:58 to go. Abrahamson got a timeout and his team responded. Rainey’s free throws with 3:52 left regained the edge for the Hornets and, as it turned out, they were ahead to stay.

Giles got behind the press for a layup and, after Darion Kidd missed a 3-pointer for Texas High, Buchanan leapt high for the rebound and got it ahead to Giles who was fouled with 3:05 left. Sinking two free throws, Giles pushed the lead to 61-56.

At the other end, Martin saved the ball on a rebound but, as he was falling out of bounds, he threw it back in only to have the Tigers track it down. But Martin came back in to make a steal, driving to a layup that gave the Hornets their largest lead of the game, 63-56 at the 2:37 mark.

Ray countered by draining his third triple of the game. Giles and Crosby added free throws but missed one apiece as well. The Tigers took advantage and cut the margin to 65-63 with :40 left.

They had to hustle against the quick, relentless Texas High pressure but the Hornets whittled the clock down to :18.9 before Rainey was fouled and converted the clinching free throws.